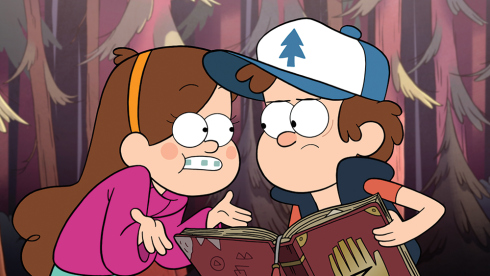 Disney Channel
made a splash last month with its tentpole telepic “Teen Beach Movie,” following in the fancy footsteps of “High School Musical” as a popcorn hit for the cabler. But the Mouse’s flagship kidvid outlet is coming out of the summer with another strong prospect that has the potential to be an even bigger franchise player for a conglom that prizes its multiplatform properties.

The animated series “Gravity Falls” is an unusual toon animal. It blends broad comedy with mythology-driven storytelling that is provoking “Lost”-like online discussions of clues and cryptograms woven into each episode as part of an unfolding mystery.

The half-hour show revolves around teenage twin brother and sister Dipper (voiced by Jason Ritter) and Mabel (Kristen Schaal) who are sent to spend the summer with their cantankerous great-uncle Stan (aka “Grunkle Stan”) in the Oregon hamlet of Gravity Falls, where he runs a roadside attraction dubbed the Mystery Shack.

The conceit is tailor-made for layering in the kind of solve-the-puzzle elements that fuel the conspiracy-theory genre pioneered by “Lost” and “The X-Files.” Putting that kind of storytelling into an animated skein was a stroke of inspiration from “Gravity Falls” creator Alex Hirsch, who was Dipper’s age when “X-Files” was at its peak.
But because it is a Disney Channel show, “Gravity Falls” still needs to be broad comedy at its core, and not so serialized so as to be inaccessible to casual, pint-size viewers. “We had to be careful to make sure we didn’t become a slave to the mythology,” said Eric Coleman, senior veep of original series for Disney Television Animation.
To that end, Dipper and Mabel encounter all manner of over-the-top characters, including a maniacal TV star named L’il Gideon, who takes his hairstyling cues from Jimmy Swaggart.
The anecdotal evidence indicates that “Gravity Falls” is building fast, with an older kid aud that leans toward boys (OP:...)
The first dozen segs of the show’s initial 20-episode order premiered in summer 2012. It picked up steam on air and online when the remaining eight started airing in February (though the finale seg, with a big plot twist at the end, didn’t run until Aug. 2).
Based on the response to the show at Comic-Con, Mouse execs are assured they’re hitting the bull’s-eye of the fantasy-drama demo — another departure for Disney Channel.
“It’s incredible to see this tremendous response bubble up (in social media), with people debating theories and Tumblr pages devoted to the show’s secrets and all the characters,” Coleman said. “There’s so much to it that the more you watch and re-watch, you find more puzzles to solve and symbols to decode.”
All of this, of course, lends itself to ancillary opportunities. A “Mystery Shack” app was released this month, and a fresh batch of “Gravity Falls” shorts bows Oct. 14 to help keep up momentum, starting with a “Dipper’s Guide to the Unexplained” series.
The intricate nature of the mythology requires an extra layer of advance planning on the part of Hirsch and his team — it’s hard to course-correct once animation production is under way. But Hirsch, who provides the voices of several of the show’s characters, including Grunkle Stan, has had a clear vision from the get-go about where the show is going, Coleman stressed. The building mystery in “Gravity Falls” was as organic to the series as the musical numbers in “Phineas and Ferb” were to the garage-band sensibilities of that show’s creators, Jeff “Swampy” Marsh and Dan Povenmire.
While the nature of “Gravity Falls” makes it a social media magnet, it wasn’t engineered that way, Coleman said. “We focused on getting the TV show right — building great characters in a fun, specific world. Once you get people to love the characters and the world, then you get them to engage in other ways,” he said.

Can't wait for the one year hiatus before Season 2. Korra fans, you know how to do it.