5 Reasons Why Adapting Reality Bites Is A Terrible Idea 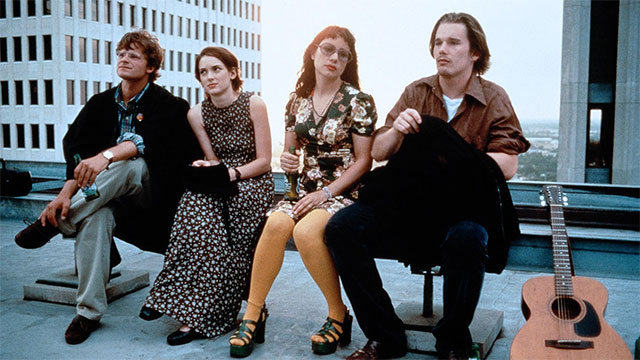 The past 24 hours have been a bit rough. First, it was announced that Ben Affleck is set to become the next Batman (him?). And now this: Ben Stiller is plotting to adapt Reality Bites for television. Is the name Ben cursed? Is it April 1st? Are these two developments the beginning of a 10 Commandments-style series of plagues? Is nothing sacred?


Before we all freak out and break our computer screens and head into the deserts and forests to form communes, let's take a breathe and remember that this happened last year when Bravo planned on ruining another perfect Winona Ryder film Heathers and destiny was benevolent enough to destroy their evil scheme. So there is hope that Ben Stiller and his minions will mess up or just forget that they promised to ransack our memories. But the question remains: When did Hollywood get so lazy? Grave robbing is not creativity! Let our sacred texts and mummies rest in impenetrable, climate-controlled display cases!

Here are just a few reasons why Reality Bites should be left alone (I would write out the full list of reasons, but I have somewhere to be this holiday season).

1. Recasting Winona Ryder (and Everyone Else) Is Impossible.

According the The Guardian, "With Ryder herself now 41, the role is likely to be recast." First off, how rude! Have they not seen her lately? She is an ageless goddess. But really, who are they going to find to have a meltdown over the definition of irony as convincingly as Wino? Selena Gomez? I can believe it's not butter and I'm not happy about it. Same goes for recasting Ethan Hawke and Janeane Garofalo. Those actors inhabited their characters so thoroughly that I still think of Janeane keeping a diary next to her bed that harbors the names of all her sexual conquests and Ethan stealing Snickers.

2. Insanity is Doing the Same Thing Over and Over and Expecting Different Results.

Considering Ben Stiller directed and starred in the original, shouldn't he know how this is going to play out? His well-meaning-but-mercilessly-square character takes Lelaina's artistic documentary and turns it into an embarrassing, shallow reality show. And then he is humiliated and broken up with and judged for eternity. Apparently, once wasn't enough. In case he didn't receive the message clearly enough when Troy let him have it, here it is again: you have indeed stepped over some line in the sands of coolness with us and no there is no secret handshake, just an IQ prerequisite.

Reality Bites already summed up the clumsy post-college existential crisis. One would hope that Ben Stiller and co. have fresh ideas and new insights into this growing pain stage, but let's be real: if they did, wouldn't they just come up with a brand new idea? Picture the risk: Lelaina and her friends just graduated from NYU and are now slumming it in Brooklyn or Queens and Vickie is folding clothes at American Apparel instead of the Gap and Michael says hashtag in real life and Lelaina wallows at home watching Netflix instead of talking on the phone to a psychic with a Southern accent. This is assuming the adaptors plan on updating the narrative to present day. If they intend to keep it in the '90s, that's its own problem and will basically be what Vickie feared her funeral would be like: everyone wearing halter tops or chokers or some shit.

The rest of the reasons at the source!
Tags: 1990s, winona ryder
Subscribe