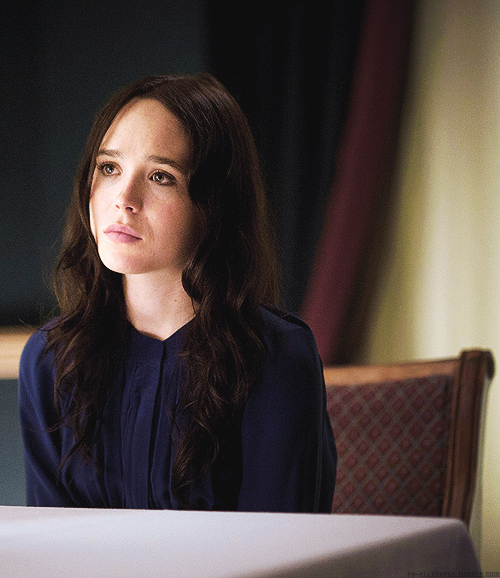 Two years after an Ellen Page 'outing' that never really was, the original website, article, and author at the center of the controversy are all MIA. The responses, however, remain - along with  thousands of comments that act as more powerful an attack on the actress' personal life than anything the writer could have hoped to conjure up on his own. Upon revisiting the melee, with newly minted pregnancy and relationship rumors acting as a backdrop, it's hard not to note that Ms. Page's most contentious role to date might just be that of self identified straight woman.

Asked recently about casting Ellen Page as a seductive actress in his most recent movie, Woody Allen replied:

"I wanted someone who was not sexual in a heavy-handed way. If I wanted an overtly sexual actress, I would cast someone like Scarlett Johansson. There are many actresses who blind you by how sexy they are. Ellen is a very sweet girl, but she can project something complicated and mysterious. You don't know too much about her - she gives you this neurotic feeling - but you know that sex with her would be an interesting experience. I didn't have to direct her: All I did was cast her. She took these monologues I gave her and did wonderful things with them." 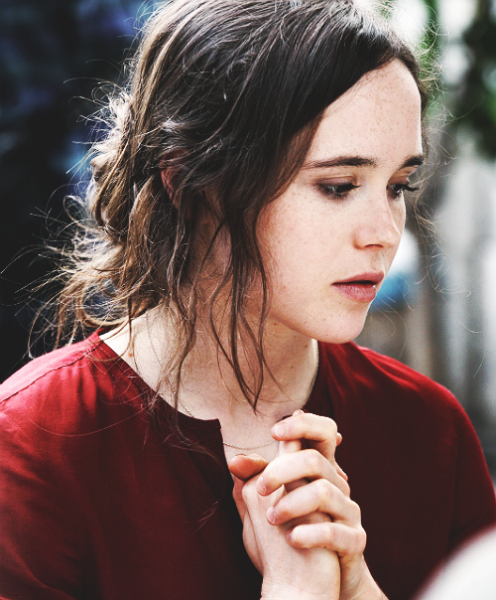 The 'Annie Hall' director's summary seems to be the general consensus among men in regards to the tiny Canadian actress. In 2009, rapper Drake even posted an ode to her on his blog, writing:

I was watching Juno tonight on the tour bus and I am so proud of you...you were always the smartest and wittiest person in our class and I only made fun of you and acted like an asshole cause I had a crush on you.

It's unclear whether the two made a go of it after his San Diego show, but the now famous rapper still had his former classmate on his mind in 2011 when, during promotion for his song 'I'm So Proud of You', he tweeted '@EllenPage I’m so proud of you.'

While the general population seems to have no problem wrapping their minds around the actress' assumed heterosexuality and inherent sex appeal, there's an odd and somewhat unexpected undercurrent of discontent and maliciousness regarding Page's public image in what many would usually consider to be the most accepting and liberal subsets of the internet. 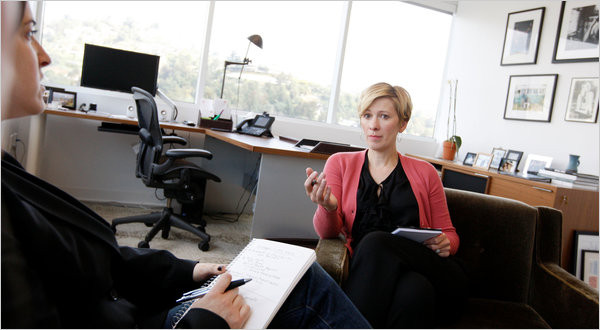 Kelly Bush, Ms. Page's renowned 'power lesbian' publicist, created a stir when she bragged about being able to get 'nasty' headlines removed from Google and notoriously pushed Entertainment Tonight into pulling footage of Heath Ledger allegedly using drugs prior to his death by getting her famous clients and colleagues to band together in protest. The latter incident set a precedent that many believe marked the end of unbiased and unapproved reporting on her clients personal lives - something the lack of publicly verifiable information on Page's dating history seems to confirm. So why are so many online fans adamant about the fact that she's gay? 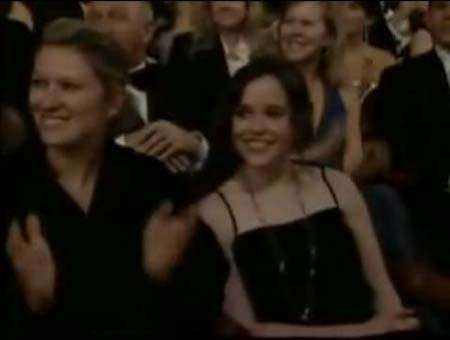 The popular reply to inquiries about Ellen's sexuality seems to be that she was already outed by a journalist... but that's not exactly true. The "journalist" was actually a no-name blogger with an almost non-existent readership, and the outing really only occurred once an ONTD'er spotlighted the story - taking the blogs traffic from around 200 hits on a good month to over 26,000 readers in 2 days. What amounted to an unsubstantiated rant that only a handful of readers would have seen, quickly went viral.

Autostraddle, an extremely popular website among lesbians who enjoy having sex with men, also added fuel to the fire by publishing a perfectly SEO optimized post ('Ellen Page Dot Lesbian Dot Com') criticizing the article's author for publicly bringing attention to something so personal.

(Alanis Morrisette ironically, the site's owner and regular contributor previously left a bad taste in the mouths of many readers due to what seemed to be her own attempts to passive aggressively out Ms. Page via random mentions of the stars sexuality in unrelated content and references to sources no one cared enough to ask her to elaborate on.)

An anonymous comment on another reporting blog summed up the situation well:

‘noone desrves to be outed’, but we’re going to make sure as many people hear about this as possible.

On an even more interesting note, lost in the fray was the fact that the seemingly unstable writer referenced Ellen Page being bisexual, rather than gay. (Page herself has referenced sleeping with ex-boyfriends in interviews.) 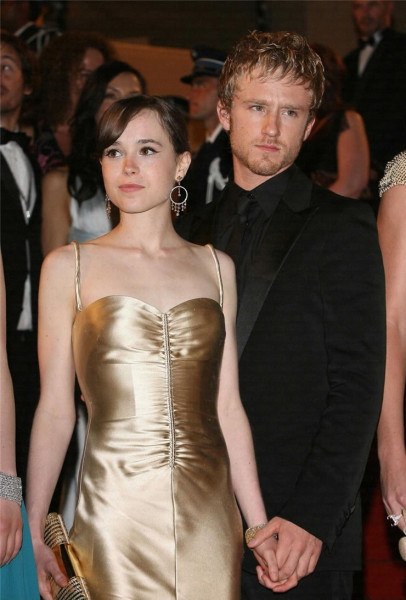 As a fitting follow-up to the drama, seemingly embittered by the relentless fan deliberation on the stars sexuality, someone claiming to be an extra from the movie 'The East' (out on DVD September 17th) caused a stir on controversial lesbian message board 'The L-Chat' via yet another Page outing. Only this time as straight:

Ellen page is not a lesbian nor has she ever been. She has been constantly frustrated by the fact that people put her in that category because of the way she dresses. She will tell you herself that her dress style and the way she goes out in public is in her words, "disgusting" That is the way she likes to dress and she describes herself as a tomboy with no fashion desire. Ladies she has multiple guys that she goes out with and as far as her sexual partners that is her own buisness but I can guarantee you from my own personal account of her she is definetely into men and not women. She has stated that she will not discuss this publically because then she would be called homophobic. I am certain this will not make a difference to those whoo have a need to place her as a lesbo.

The poster was quickly dismissed by fans as being a troll due to the fact that he referenced the vegan actress smoking cigarettes (it later turned out that she does indeed smoke), but fact or fiction - he brought attention to some undeniably problematic aspects of the lesbian themed chatter. 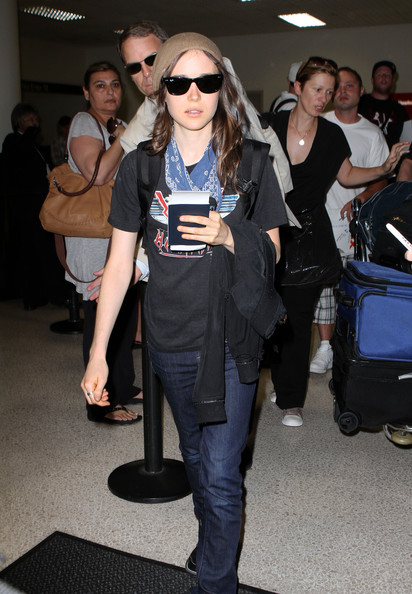 While speculation about the personal lives of movie stars is to be expected, and specifically presenting gay speculation as something one needs to be defended against only furthers the homophobic mindset that there's something insulting and inherently wrong about the label - it's impossible to overlook that all but a minuscule amount of the 'lesbian' declarations in relation to Page seem to be rooted in gender and sexual stereotypes. And maybe a bit of sour grapes?

In a recent profile on the actress, Hadley Freeman wrote:

"Perhaps one of the most obvious examples of the sexism Page has encountered is that pretty much as soon as she came to international attention in Juno, rumours started about her sexuality, simply because, to quote one well-known accusatory blogpost in 2008, "she certainly dresses like a, you know, tomboy and if you Google 'Ellen Page boyfriend', not a whole lot comes up." (Going by such criteria, half the women I know should, by rights, be lesbians.)" 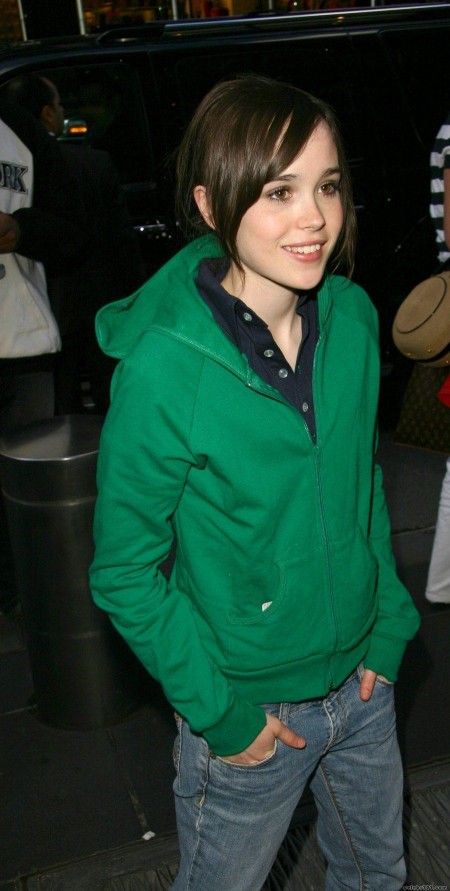 The most striking thing about the internet commentary is that it more often than not originates in environments that normally advocate for and champion the fight against the same perpetuation of stereotypes that allows for gleeful labeling of Page.

While the 'gaydar' defense would normally be a valid one, in the context of these types of discussions it comes off as more than a little disingenuous. Two pages forward and three pages back, Hollywood's more 'femme' and high profile closeted actresses get nary a 'so gay' mention. Additionally, no matter how good we think our gaydars are... can any of us really say that they're immune from the internalized misogyny and homophobia that touches every other aspect of our lives?

Page has admittedly fanned the flames of lesbian speculation a time or two herself. 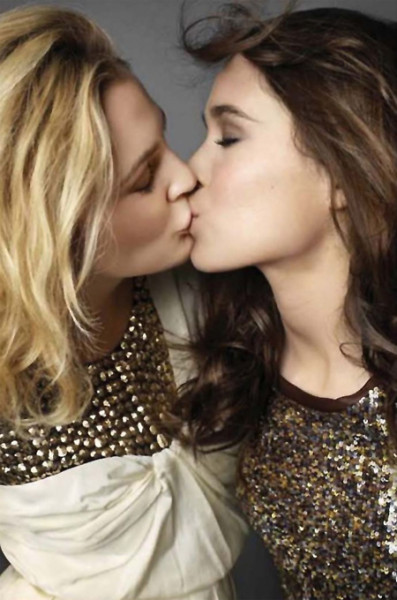 Years before Rupert Sanders would be lambasted for taking advantage of the young Kristen Stewart while she was under his direction (#powerdynamics), Drew Barrymore showed no hesitation about getting affectionate with the younger Ellen Page whom she hand selected to star in the film 'Whip It' (her directorial debut).

Barrymore and Page spontaneously shared a kiss in front of cameras during a Marie Claire photo shoot, causing more confusion than stir. 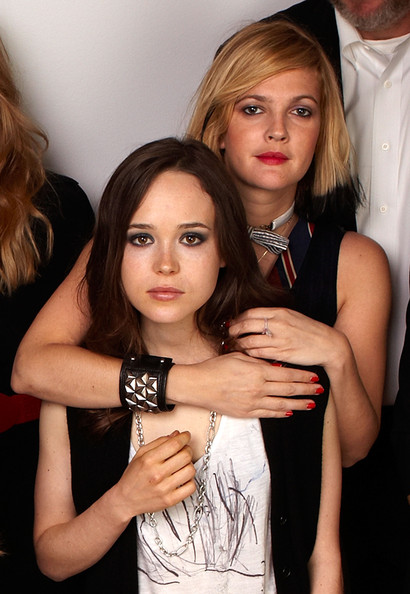 When asked about what statement she was trying to make with the kiss, Drew responded:

"We do that all the time, we’re friends. People can take from it what they want. We’re just girls being silly and having fun, girls are affectionate with each other. We don’t have that hang up of what it’s gonna look like or what people are gonna think. I think it’s hysterical."

...but was also quick to add: "I don't think I could ever just solely be with a woman...It's just not enough for me."

In the context of the director's latter revelation, it's hard not to process the promotional tour limited hypersexual interactions between the two as being much more than a girl on girl publicity ploy. While some may argue that Barrymore's behavior was predatory and Page's complicity shouldn't be of issue, at the very least Page was keen to the exploitative nature of what she was participating in.
... And then there was the paparazzi spot and scatter heard round the tumblrs of baby gays everywhere.. 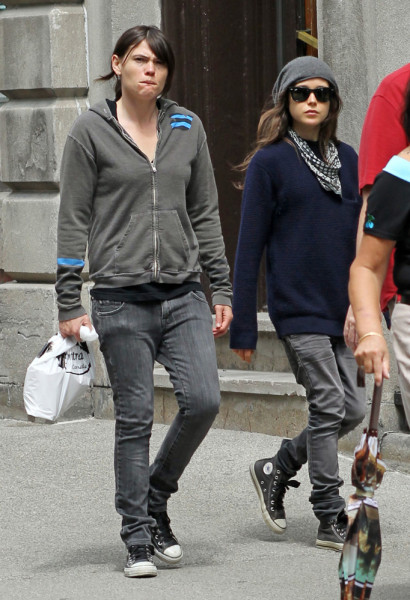 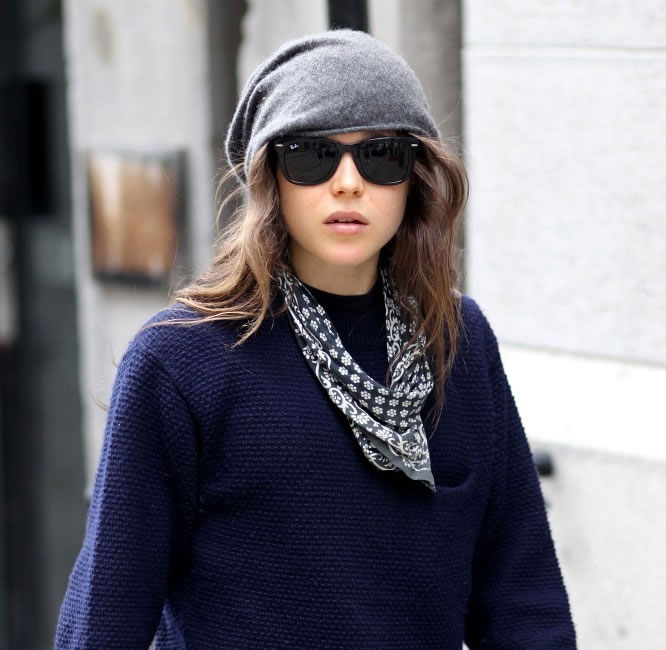 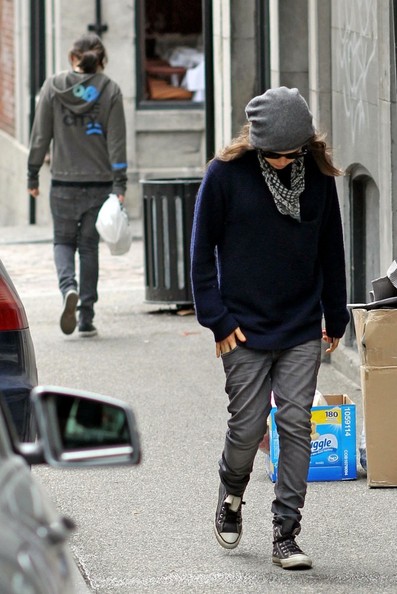 Candids showing Ellen Page and (out lesbian) actress Clea Duvall parting ways after spotting paps struck a cord with every young lesbian whose ever experienced having a closeted girlfriend pull their hand away in public. While it's very possible that photogs just caught them both on a bad day, there's no denying that this is a departure from Page's usual behavior when being snapped with straight female + straight/gay male friends. 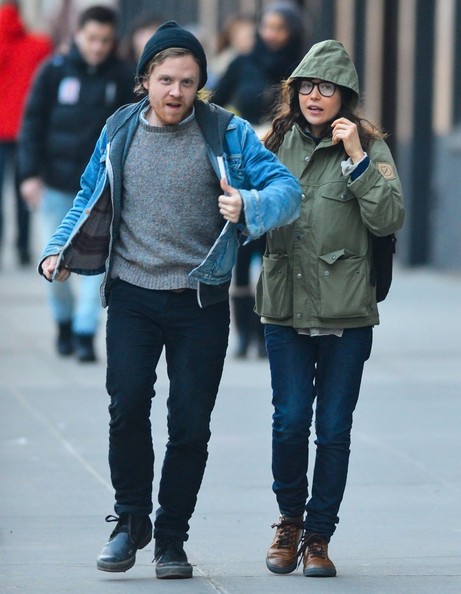 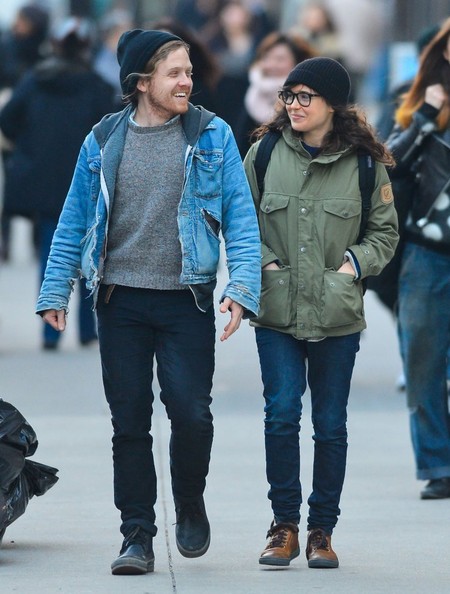 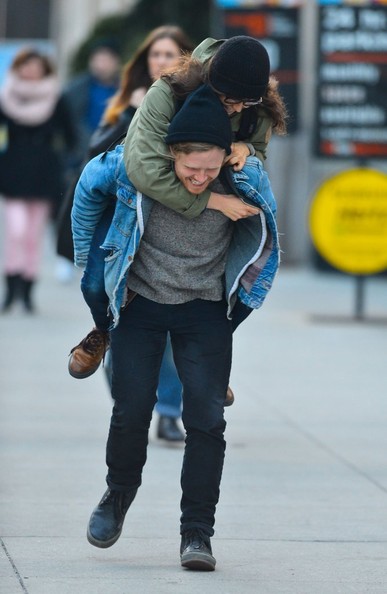 Still, on the basis of such shaky 'proof' - it's hard not to feel frustrated by what often gives the sense of being an almost pathological need to proclaim 'Ellen Page Lesbian!' in response to even the most passive references to the actress. However, at the core of the surprisingly complex issue is an undeniable amount of heart and one very important word:

Lack of young un-closeted lesbian representation, along with the draw of Page's unapologetic liberal feminist viewpoints and unparalleled androgynous to femme style versatility seems to have created a perfect storm around the petite Canadian. The actress has become an unwitting matriarch of sorts within the gay community, and holding on to her has become more about self preservation than anything to do with Page herself.

One the other end of the spectrum, self preservation once again seems to be coming into play - but for distinctly different reasons. A make-up free denim swathed Ellen Page wrapped in 6'4" of Alexander Skarsgard Swedish goodness is every misogyny filled straight female fan's red pill, with each 'she looks like a lesbian' comment acting as a symbolic reach for blue. 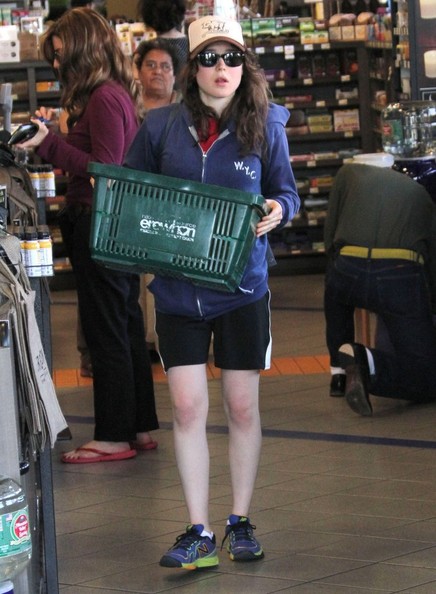 Somewhere along the way, the fan reaction to Page within various communities turned a quest for privacy via ambiguousness into a political statement; weighing down anything the actress may choose to make public about her personal life with far reaching implications.

Reveling in open and unapologetic conjecture about sexual orientation is a controversial but hard earned privilege. In 2013, there's no reason for heterosexual to continue to be the undisputed default.

But I think we have to be careful that, in a quest to free ourselves from our own chains, we don't inadvertently create prisons for others. Namely, our daughters - who just might love wearing flannel as much as they love dating men.

Long before the days of internet commentary, when married actress Ally Sheedy was asked whether she had sex with women, she replied:

And I think that "You thought I'd say no, right?" is something we should all remember in regards to speculation about the young Ms. Page. The always notable words of 'Lord of the Rings' author J. R. R. Tolkien seem to sum it up best: