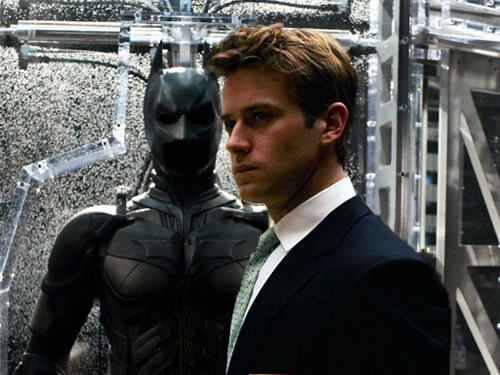 Armie Hammer and Henry Cavill are attached to star in Guy Ritchie's "The Man From U.N.C.L.E." for Warner Bros., which is why fans probably won't see Hammer play Batman opposite Cavill's Superman in the upcoming "Man of Steel" sequel.

"I think if Henry and I did that film and then a superhero film straight after, people might start to wonder about us," Hammer, charming as ever, joked to Metro in a new interview.

That Hammer would find himself mentioned as a possibility to play Batman is far from random. He was previously attached to star as Bruce Wayne in the studio's first attempt at a Justice League film back in 2007. Due to the 2007-08 Writers Guild of America strike, among other issues, plans were shelved.

"If what we were going for would have happened would have been the perfect combination of the realistic grittiness of 'The Dark Knight' series mixed with the amazing detail and, sort of tactile nature of the 'Star Trek' series," Hammer told an Australian interviewer back in July. (Watch the full interview below.)

Despite the enthusiasm Hammer had for the project -- something he also expressed in this interview with HitFix -- he told Metro that comic book films aren't high on his list at the moment.

"I'm not actually a big fan of superhero films," he said. "If you have a guy who is supposed to be invulnerable, then what’s the point?"

Whether Hammer would even be sought for the new Batman is, of course, up for debate. According to new rumors, director Zack Snyder wants an actor in his 40s to play the role in "Man of Steel 2." Hammer is just 26.

For more on Hammer, head to Metro.