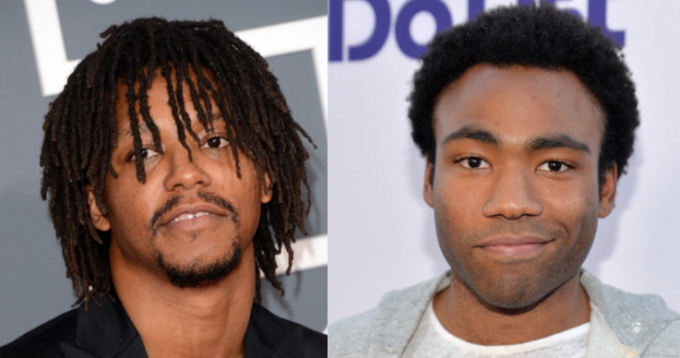 Lupe Fiasco unleashed some unwarranted beef against actor-turned-rapper Donald Glover aka the Childish Gambino. As race and civil rights tensions are at an all-time high in the aftermath of the Trayvon Martin murder trial, Fiasco had to go on and open a whole new can of worms.

It all seemingly started out in jest, when the Food & Liquor rapper tweeted that "Roscoe's should serve a 2pc. white with beans and call it "The Wind Beneath My Wings." Actually, kinda really funny if you think about it. The folks at the LupeFiascoStore.com thoughts so too, so they tweeted back: "@LupeFiasco can we get one stand-up from you? Just one? I don't care when you do it.. I just need a formal comedy show starring Lupe Fiasco."

Lupe's reply: "That's like pulling a @DonaldGlover in reverse." We'll note that this tweet was more of an obvious remark than offensive response.

"LupeFiasco speaking of which, you guys should do something.. doesn't have to be music either. @DonaldGlover," replied LupeFiascoStore.com. Quite a friendly suggestion, we might add. Here's where things took a nosedive...

One fan was quick to note:

"Those were niggaz," tweeted Fiasco. "Blacks and niggaz come from 2 completely different parts of the chicken... @datkidsqweent @lupefiascostore @DonaldGlover."

The last tweet lit up a Twitter storm, with Fiasco's name soon trending on the social media site. Whether Fiasco was just trying to bring his impromptu Twitter standup stint full-circle by bringing chicken back into it, only Fiasco will know. Still, it was Childish Gambino who had the last word. It was a witty response.

Fiasco has given us side eyes and revealed he indeed meant the whole exchange as a joke. Here's what he tweeted @VIBEMagazine: