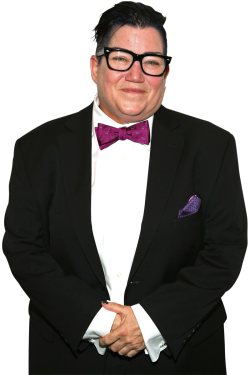 Everyone is not only watching Orange Is the New Black, but totally obsessed.

I’ve had people tell me that they’re watching OITNB for the third time. It hasn’t even been out for three weeks. You know, I’ve been moderately famous for a very long time, and when I say a very long time, I mean 30 years. And I get stopped on the street and asked to have a picture taken with me — that happens to me every day now. It seems to be a 14-to-25 demographic; I have a whole new fan base. It took Netflix to get me the young straight girls I’ve always wanted. [Laughs.]

So, let’s talk about the screwdriver. Piper loses track of it. [SPOILER] Boo steals it, and we think she’s going to use it to kill Tricia, the new girlfriend of Boo’s ex. And aren’t we surprised what she does with it?

It’s brilliant. This girl [in real life] ran out of a hardware store, screaming, “Big Boo! Big Boo! Please sign my screwdriver,” and hands me a screwdriver and a Sharpee to sign her screwdriver. [Laughs.]

What did you make of New Yorker (and former New York) TV critic Emily Nussbaum referring to Big Boo as a “bulldyke” in her review of OITNB? I saw that you shrugged it off on Twitter.

Yeah, I tweeted that I am a bulldyke, I don’t just play one on TV. I got in this fight with this earnest fucking faggot about it, like, “I spent all this time reclaiming these words, about how they’re not bad words, and now you’re making them bad words again.” I’ve been doing stand-up for so long. There are no bad words. It’s the intent the individual uses when they’re saying the words. Didn’t Lenny Bruce do this, what, 50 years ago? We are still having this fight? Emily wasn’t calling me a bulldyke, she was calling the character a bulldyke. And that’s why I went into a tizzy again. She can call me a bulldyke personally. I don’t care. If Emily Nussbaum calls me a bulldyke, I laugh and say, “Thank you.” If Pat Robertson calls me a bulldyke, I rip his nuts off. It’s about the intent. I was so happy for the mention, because the cast is so huge, and I got mentioned in almost every review, and in a very positive way.

It is your dyke duty, you realize, to tell us about working with Jodie Foster [who directed episode three, “Lesbian Request Denied”].

I literally had one line, when I’m standing in line for pills. We did the first rehearsal, and Jodie came up and grabbed me by the shoulders and she goes, “You’re really very funny. You’re an incredibly funny actor. You move a lot” — my character is kind of nervous, that’s why she’s on meds — “I think that’s too much for this shot.” So I was like, I’ll tone it down. “And she’s like, 'We’re gonna keep the camera on you, and just throw out ten lines,' because the line was, 'Oh, I like the orange ones. Oh, wait a minute, they give me that terrible itch in my … ' That was the end of it. So I just chose the dot-dot-dot to be the vagina, and then every funny thing I could think of. I think take seven was “Kunta Kinte.” And Laverne [Cox, who plays Sophia] was behind me and she ruined the take because she burst out laughing when I said “Kunta Kinte.” And I was like, “Asshole, that would have been so brilliant!” And she was like, “Say it again!” and I was like, “No, no, no! I get ten takes. I’m gonna say something funny.” They ended up going with “cooter,” I believe.

You told The Advocate that the set was like one big dyke bar.

It’s the most fun set I’ve ever been on. We knew when we were doing OITNB that we were doing something special. You could feel it, it was different. I went, “This set is a dyke bar, all it needs is a pool table and D.J. spinning ‘We Are Family,’” which is what I told The Advocate, and they used that as the opening line. But when I said it, we were all sitting in what they call “video village,” and the first AD was a lesbian and one of the writers was a lesbian and boom-boom-boom. I have no idea whose business is what, but everybody was basically a lesbian. And then all these crew people. There was just a sense of family, and not just from that. And then the woman structure. We were making jokes about the Old Boy Network, so it’s tons of women making huge executive decisions and the men that are on the set are men who are comfortable being on a set like that, so they’re great. Because a lot of guys wouldn’t be comfortable being on a set like that, I can assure you. And we all feel tight. And we are all giddy as just can be. And loving it right now.

Are there a lot of lesbians in the cast?

Natasha Lyonne, I ask with hope in my heart?

No, she has a boyfriend. I’ve had a crush on her since Slums of Beverly Hills. I told her that, too, because I’m such an asshole.

I read an interview where she asked why more women don’t hit on her.

Oh, that’s her being funny, trust me. Please, I hit on her every day. And she’s like, "Lea, remember my boyfriend." And I’m like, "Sorry, Tash." We’re just pals. I’m leaving off lesbians, I feel bad.

read the full article at the source

Does "everyone" include my bb Samira tho?????