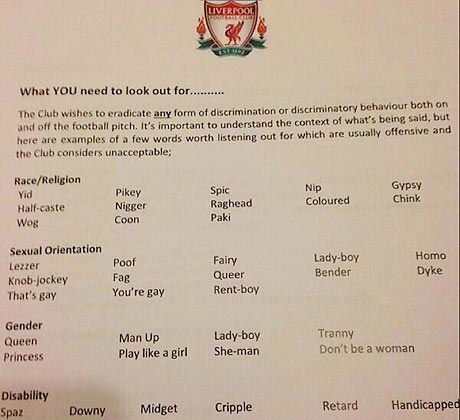 Liverpool have issued members of staff with a list of "unacceptable" words and phrases in their efforts to combat all forms of discrimination at Anfield.
The guide, part of a wider education programme run by the club, details terms that employees should deem offensive under the headings of race/religion, sexual orientation, gender and disability. Most are self-explanatory and the guide advises that it is "important to understand the context of what's being said", as in the use, under gender for example, of "princess" or "don't be a woman" on the Anfield terraces next season.

Liverpool's list of what is "usually offensive and the club considers unacceptable" has been given to all full-time and casual members of staff who have contact with the public on matchdays or on a daily basis. The club were widely criticised for their support of Luis Suárez when the striker was found guilty in December 2011 of having used racially abusive language towards Patrice Evra but view their education programme as one of several proactive measures taken to combat discrimination. 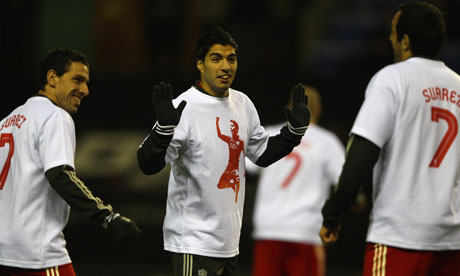 Liverpool were criticised for the manner of their support of Luis Suárez, second left, after he racially abused Patrice Evra

The guide has not been issued to Liverpool players because they, along with players at all Premier League and Football League clubs, receive separate guidance from the Football Association.
Rishi Jain, the social inclusion officer for Liverpool who helped compile the guide, said: "As part of the club's continued commitment to tackle all forms of discrimination, as well as promoting its approach to equality and diversity, Liverpool FC have been actively engaged in a full club-wide education and awareness programme.
"This programme includes interactive workshops and a handbook which is designed to provide information on the latest equality legislation including information relating to what terminology is deemed as both acceptable and unacceptable. This programme of awareness enables our employees to recognise inappropriate language and take the necessary steps to ensure Anfield is free from all forms of discrimination."
Liverpool became the first Premier League club to be represented at a UK Pride event last August. Jain said: "Liverpool have been actively working with Kick it Out, Show Racism the Red Card and the Anthony Walker Foundation for many years and has been recognised externally for its contribution to helping tackle discrimination and promote Anfield as an inclusive and welcoming environment.

"The club has already attained Kick it Out's equality standard preliminary level and has recently submitted its application for the equality standard intermediate level demonstrating its continued commitment."
Liverpool's guide has been praised by Lord Ouseley, the chair of Kick It Out. He said: "Kick It Out acknowledges the great strides that Liverpool FC have taken over recent times to reiterate their continued commitment to equality. The guide forms part of an overall awareness programme, and is a positive and proactive step in educating staff and stewards at the club.

"Match day stewards must be trained on dealing with incidents of discrimination and unacceptable behaviour in order to eradicate it from our stadiums, and more and more football clubs are using Kick It Out's Equality Standard as a framework to develop this education across all areas of the business."