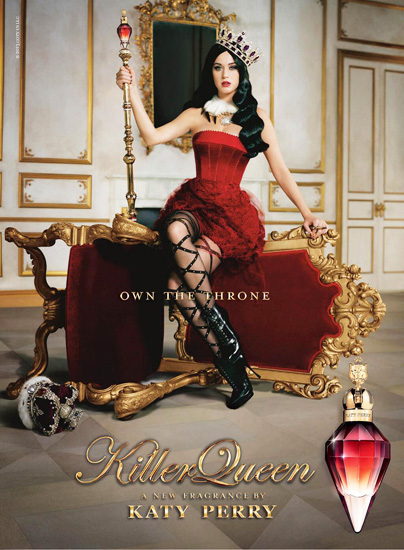 If there's anyone who knows how to commit to a theme, it's Katy Perry. When we first caught wind of her forthcoming Killer Queen fragrance—the "California Gurl's third scent, if you're counting—we just KNEW we were in for a campaign dripping in gobs of crazy opulence, louche regal status, and at least a hint of KP's signature flavor of camp. We saw the bottle, a pointed fragrance grenade modeled after the top of a scepter which is meant to lay on its side, back in May when Katy revealed her new perfume project just ahead of the 2013 Met Gala, but since then, we haven't heard much about it (save an extensive interview about it with WWD earlier this month).

Rather than the matching sun hat and coat steez of England's current Queen Elizabeth II or even the covered-up, accordion-collared of the first Elizabeth, KP goes for a *achem* leggier interpretation. Perry wears a satin corseted dress with a full, bustled (but still totally mini) skirt in a rich bordeaux styled with black latticed tights, patent lace-up booties, an over-sized jewel-laden crown, massive scepter (topped with the perfume bottle!) and what looks like a fuzzy ivory collar necklace situation. As far as the Killer aspect, we THINK that point's being made by the king's crown kicked to the bottom left of the frame and that toppled over throne. *snap in a Z formation* QUEEN! (idts)