It had to be George 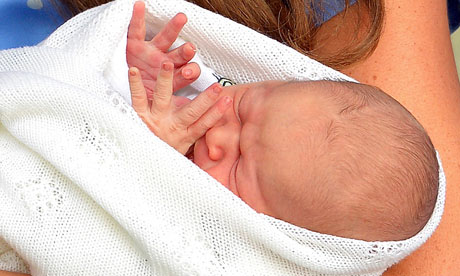 What's in a name? asks Shakespeare's Juliet. The answer is, a lot: tradition, emulation, family expectation. Our present Queen Elizabeth II (named without a thought that she would ever reign) has benefited hugely from having the same name as the most glorious and personally resourceful of all our monarchs. When her son succeeds her, he will have to dodge comparisons with the previous two kings named Charles: one, pig-headed and divisive; the other, amoral and self-gratifying.

So it had to be George. The bookies who made this name the favourite actually seem to have thought little about unfortunate royal role models in calculating the odds on other names. Their second favourite was James, in blind disregard of dynastic history. The present incumbents in Buckingham Palace owe their status to the displacement of the last James (James II, brother of Charles II) from the throne in 1688 because of his absolutist inclinations and open Roman Catholicism. For another half a century supporters of his and then his descendants' claim to the throne were called Jacobites, in echo of his name. His son proclaimed himself "James III" and led an armed rebellion. *The name seems even less likely as the new baby's father, Prince William, shares a name with the very man (William of Orange) who expelled James II. And there is always the memory of that pesky James Hewitt.

History discounted other possibilities. Oliver is a top name for the bourgeoisie, but we all know about the most famous English Oliver in history**. Even John might evoke unwanted associations: bad King John may have died almost eight centuries ago, but he keeps coming to life on film and TV. In fact, the field feels narrow. Alexander and Louis are fine as second and third names, but either would have had a foreign feel as the name of a king.*** Francis attracted plenty of bets but the royals surely would have flinched from an epicene name (it sounds as though it could be male or female). Names never associated with royalty before would have signalled the couple's oft-touted modernity, but the risk of bathos would have been too great. Could there ever be a King Jamie? Or a King Neil? And the flowery names that Kate's friends from public school or university might flourish (Orlando? Tristram?) would have turned the House of Windsor into pantomime.

Boys have to have blunter names than girls. The younger female generation of the House of Windsor can be called Zara, Eugenie, or Beatrice. The males are another matter. Neither can the heir to the throne get one of those forenames that is a shortening of another name (Jack, Fred, Tom). Prince Harry got his name because he would not be king. On the eve of the Battle of Agincourt, in Shakespeare's Henry V, the English troops are inspired by "a little touch of Harry in the night". The words are powerful because only the prospect of battle allows for this informal naming of King Henry.

Another great English author, Jane Austen, lays out the most solid English forenames. Her brothers were called Henry, George, James, Edward, Francis and Charles: a roll call of what we now think of as the most traditional and downright square of names. Her heroes have names like Henry, Edward and Frederick. In Emma, Mr Knightley becomes engaged to the heroine and then asks her to call him by his first name, as solidly English as the great trees on his ancient estate: George.

This was the name brought over by those German interlopers who were handed the throne when Queen Anne failed to produce any heirs. Georg Ludwig, elector of Hanover, had the good luck to share a name with England's patron saint. He and his son, George II, carried on sounding German, but the ascent to the throne of the thoroughly British and bourgeois George III made the name sound ultra-patriotic. If the Duke and Duchess of Cambridge did decide the name themselves, they had the nous to make the choice that "the firm" would have made for them.


"he will have to dodge comparisons with the previous two kings named Charles: ... the other, amoral and self-gratifying."

*Kate's Brother is also James, as is Prince Edward's son

** Oliver Cromwell, Lord Protector of the Republican Commonwealth following the regicide of Charles I

Louis and Alexander have precedent in the Royal Family, but:
***Many Kings of France were also Louis

Alexander was borne by Greek, Serbian and Yugoslav Kings as well as three Scottish Kings - the latter fact does not absolve it from being "too foreign" a first name for the Anglo-Germanic House of Windsor. I C U.