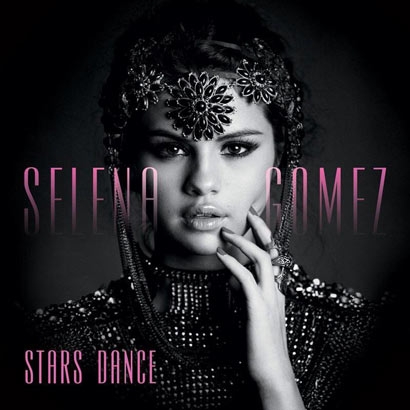 Although she's been in the public eye for over a decade as a child actress-turned-pop star, Selena Gomez has always come across as somewhat hard to decipher compared to her fellow ex-Disney peers. Sure, she has a very public relationship with Justin Bieber under her belt, and a supporting role in the girls-behaving-very-very-badly thriller "Spring Breakers," but she's remained virtually scandal-free compared to, say, Miley Cyrus or her "Spring Breakers" co-star Vanessa Hudgens.

Those looking for additional insight, then, won't find much of it on "Stars Dance," billed as Gomez's "solo" debut after three albums of dance-pop with former backing band The Scene. There's a pair of danceable breakup ballads that address her dissolved romance with Bieber, but without the real-life voicemail message that was apparently removed from album closer "Love Will Remember," even they feel vaguely impersonal at best, despite co-writing credits from Gomez herself.

What's left, then, is a collection of 11 shinily produced pop songs that find Gomez trying on a series of different personalities with her slight-yet-capable vocals. Lead single "Come & Get It" is one of several attempts at Rihanna's brand of world pop, club bangers "Birthday" and "B.E.A.T." see her trying Dev-style EDM, and the title track is a nod to Skrillex, who also composed the dreamy score to "Spring Breakers."

Which songs are the best on "Stars Dance"? Read on for our track-by-track review of Selena Gomez's latest.

"If you want me I'm accepting applications," Gomez proclaims on this peppy, dance-pop rave-up courtesy of Far East Movement/Dev producer the Cataracs, nodding to her newly single status. As far as current trends go, "Slow Down" checks each one on the list — a pseudo-dubstep pre-chorus breakdown, stretched-out staccato vocal loops and not-too-naughty-for Disney lyrics ("You know I'm good with mouth-to-mouth resuscitation") for good measure. Harmless, frothy fun.

3. Stars Dance - With a fuzzy, mid-tempo beat similar to "Come & Get It," the title track channels the dreamy dubstep of Skrillex but also features one of Gomez's most distinctive vocals. Layered with Rock Mafia's signature drum beats, "Stars Dance" is a stylish standout.

4. Like A Champion - The Rihanna-esque portion of "Stars Dance" kicks in with "Like A Champion," a reggae-lite confection from co-writer Peter Thomas (Betty Who, Victoria Justice) that ultimately falls victim to too many references to the Barbadian pop princess — right down to the lyric "shine like diamonds in the sky." Though a little island flair ultimately suits Gomez well, "Like A Champion" doesn't do much for establishing her own musical identity.

Originally written for Rihanna, "Come & Get It" is the biggest hit of Gomez's career, although it doesn't quite pack the punch of 2011's excellent "Love You Like A Love Song."

6. Forget Forever - The first track to directly address her split from Bieber, "Forget Forever" finds Gomez mourning its loss and also pointing fingers. "Our love was made to rule the world / you came and broke the perfect girl…you left me wanting what we were" she sings on the chorus as squiggly beats and Electric Daisy-ready piano flourishes pile upon each other.

7. Save The Day - Co-written by Livvi Franc, "Save The Day" never approaches the level of sass shown by the "Now I'm That Bitch" singer a few years back, but borrows the same kind of gym-friendly beats. Though Gomez doesn't pitch in on lyrical duties here, there's still vague references to Bieber sprinkled throughout ("Just tell me it's not over / and we'll never reach the end.")

8. B.E.A.T. - Was Dev's "Bass Down Low" really a big-enough hit to warrant a knockoff? That appears to be the case with "B.E.A.T.," which practically rewrites every line of the hook on Dev's solo breakout but throws in a couple innocuously sung verses by Gomez.

10. Undercover - After a while, "Stars Dance" begins to sound like an exceptionally produced Disney workout playlist. "Undercover" supports this theory, but could perform well as a standalone single with the right treatment. The synths are heavy enough, and there's plenty of latter-period Britney-isms (the vocal warps on "you can keep it undercover") to spare.

The closest thing to a confessional moment on "Stars Dance," "Love Will Remember" finds Gomez retracing the steps of what went wrong with Bieber. "The trips we dreamed of taking / The tacks left on the map / What happened to that?" she sings sadly over an otherwise-thumping beat, later adding, "I used to think that I was irreplaceable / We lit the whole world up / Before we blew it up / I still don't know just how we screwed it up." Though it ends an otherwise peppy collection on a bittersweet note, "Love Will Remember" may provide some solace to the hordes of fans still mourning the loss of "Jelena" themselves.