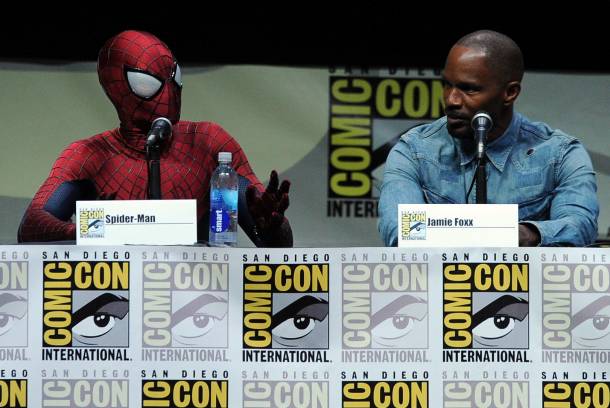 Andrew Garfield Went Totally Method at the Spider-Man Panel
"Who's Andrew?" asked Andrew Garfield. He scratched his head, which was covered in a red spandex mask.
At Comic-Con to promote The Amazing Spider-Man 2, Garfield had ascended the Hall H stage dressed in the Spider-Man costume, a nod to the memorable moment two years before when Garfield showed up to the first Spider-Manpanel in costume, too. That time, Garfield quickly doffed the mask to read a heartfelt note about what Spider-Man meant to him, but this year, Garfield went method for the first part of the panel, and the mask stayed on. He wouldn't even cop to being lowly Peter Parker, let alone some 29-year-old Brit named Andrew Garfield. And who is that guy, anyway?
"He's the actor who plays you in the movie we made," offered Marc Webb, who directed Garfield in both Spider-Man movies.
"I thought Eduardo Saverin played me," cracked Spidey, referencing Garfield's character in The Social Network.
Said Webb patiently, "Andrew Garfield is the actor who played Eduardo Saverin."
"Oh," said Spidey. A beat passed, Spider-Man's face impassive under the mask. Then: "He's done more than one movie?"
(Read the rest at the source) 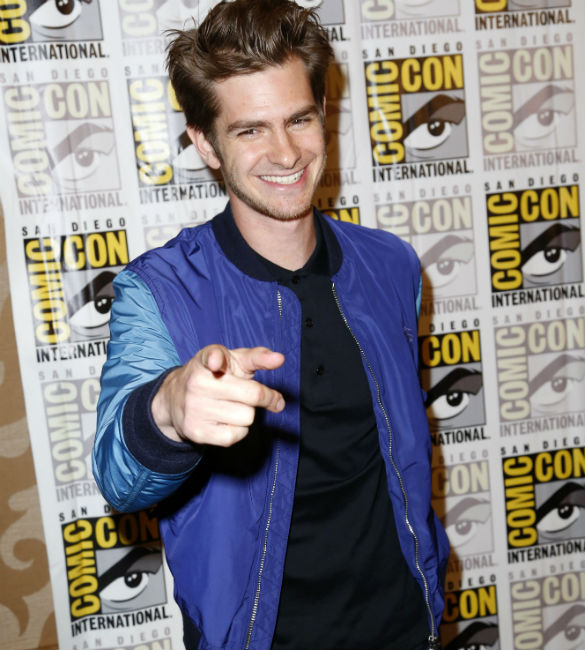 Andrew Garfield appeared at Comic Con earlier this week and the actor went all out as he appeared on the interview panel in San Diego, dressing in a Spider Man outfit.
Jamie Foxx and Dane DeHaan also showed up to promote their latest movie Amazing Spider- Man 2 and Emma Stone, who is filming a Woody Allen movie in France, left a video message.
During the Q&A session, Garfield first tried to tackle some questions in full costume, but finally got rid of the mask. A fan asked him how he toned down his "awesomeness" as Peter Parker, noting that Tobey Maguire's version was "this really nerdy guy, [that] girls don't really like him."
The actor replied, "I'm so, so sorry to disagree with you, but you are mistaken on all counts. Tobey Maguire was a sex machine!"
He then jokingly offered to meet the fan at the back of the hall. 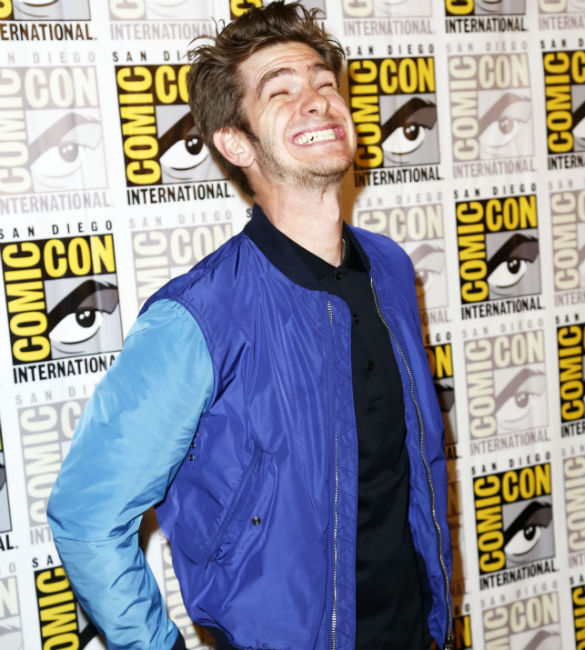 Asked about the possibility of Spidey's gay relationship as he himself suggested before, Garfield answered, "Spider-Man stands for everybody - black, white, Asian, gay, straight, lesbian, bisexual. [But] it wouldn't make sense if in the third movie suddenly I was with a black guy; we haven't really established that."
The 29-year-old says he would be interested to see if the next Peter Parker was gay.
The star recently said to Entertainment Weekly: “I was kind of joking, but kind of not joking about MJ."
“And I was like, ‘What if MJ is a dude?’ Why can’t we discover that Peter is exploring his sexuality?" the actor continued.
The Californian star does have a point - homosexuality is becoming increasingly better represented in modern day movies - just look at Ennis Del Mar in Brokeback Mountain and Roxy Richter in Scott Pilgrim Vs. The World, just to name a few.
The superhero star exclaimed: “It’s hardly even groundbreaking!… So why can’t he be gay? Why can’t he be into boys?” 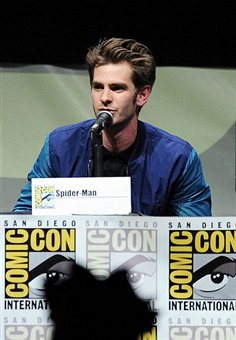 During the Amazing Spider-Man 2 panel at Comic-Con today, one attendee asked Andrew Garfield about comments he made to EW last week about the possibility of Spidey engaging in a gay biracial romance. The attendee explained that, as a gay Asian-American, he found Garfield’s words extremely encouraging, and asked if the star found it hard to openly declare his stance on controversial issues. The Hall H audience cheered the question. Then Garfield responded, and the cheers got louder. “Spider-Man stands for everybody: black, white, Asian, gay, straight, lesbian, bisexual,” Garfield said. “To me, love between two consenting adults is love. To me, that anyone would bat an eyelash at what I said is interesting.”
Garfield did note that it was unlikely that Peter Parker would embark on sexual exploration in the future Amazing installments. “It wouldn’t make sense if, in the next movie, I was suddenly with a black guy,” he said. This led his Amazing 2 co-star Jamie Foxx to jokingly protest: “I’m a good cuddler!” So, in conclusion, Spider-Man probably won’t be bisexual anytime soon, but Spider-Man does support gay rights. So, progress.

when will your faves be as flawless as he is rn
Tags: andrew garfield, comic books, comic-con, jamie foxx, lgbtq / rights, spider-man, tobey maguire
Subscribe