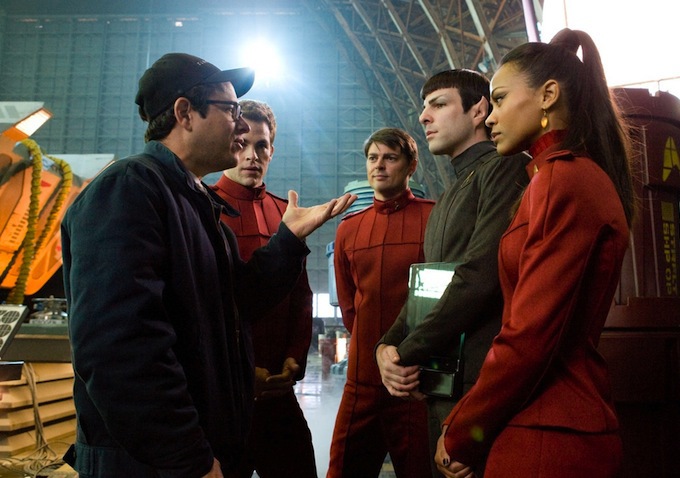 Actors love to talk out of turn and all too often their wishful thinking is pretty much the equivalent of fanboy daydreaming. Take comments from “Star Trek” actor Zachary Quinto that seem to have been taken at face value across the entire Internet. Quinto “supposes” that “Star Trek 3” will shoot next year. “'Star Trek 3' should be filming, I suppose, next year,” is the full quote. “It’s going to be made a lot quicker than the last one. That’s the plan, although nothing is confirmed yet.” (If that’s not the most tentative, and half-hearted declaration of news this month, we’re not sure what is). Elsewhere in the article from Buzzhub, Quinto “mentioned that J.J. Abrams was planning to direct 'Star Trek 3.' "

Let’s count the ways why this won’t happen: 1) J.J. Abrams will be spending 2014 prepping, shooting and editing “Star Wars: Episode VII.” There’s absolutely no way on earth that Abrams will shoot two massive-scaled tentpoles in the same year. That’s downright laughable. If you were to use odds, it would be something like 10-million-to-one. Abrams wants to nail the new “Star Wars,” and all his attention and focus will be on that franchise only— he won't be multi-tasking as a director on two mega-sequels.

2 & 3) Disney and Kathleen Kennedy will simply not let Abrams shoot his competing franchise in the same year he’s supposed to shoot “Star Wars.” Likewise, Paramount is not dumb enough to put “Star Trek 3” head to head with “Star Wars” and nor would they want him doing double promotional duties (the same promotional duties which would overlap with any number of elements of the other film). The gap between the original "Star Trek" and “Star Trek Into Darkness” was four years. Sure, Abrams shot “Super 8” within that time frame, but that’s still one film every two years. And ‘Into Darkness’ was a fairly long process for Abrams. The movie shot in January 2012 and wasn’t released until more than a year later in the spring of 2013 (at the insistence of Abrams, who forced the studio to move back the release date so he didn't have to rush). The original “Star Trek” was also a year and four months from shoot date to release.

So count J.J. Abrams out directing "Star Trek 3" in 2014— no amount of hoping and dreaming will make this happen. As for “Star Trek 3” shooting in 2014 without Abrams (or with him taking a producing credit)? Sure, Paramount doesn’t want another four year gap between “Star Trek” films and that could be possible, but as of right now there’s a white page: There’s no screenplay written. It would need to be written, developed, finished and then you’d have to find a director to shoot it (because J.J. Abrams is NOT directing this movie, kids). It’s not inconceivable especially because “2014” could mean anytime in 2014 (like in December at the end of the year). If we were betting people, we wouldn’t put a cent down that it’ll happen.

The general rule is that sequels always make more money than their predecessor, this is the reason they are made. This is the reason why franchises with little to no (or tiny) profits (“Red,” “G.I. Joe”) get followups, because the wisdom is that the property is now known, and even if they first film didn't clean up, the second one will likely outgross it. But “Star Trek Into Darkness” is the rare major blockbuster sequel that didn’t outperform its predecessor. 2009’s "Star Trek" grossed $257 million domestically, while 'Into Darkness' only grossed $224 million despite the brand having already successfully rebooted itself. The story was reversed worldwide with 'Into Darkness' outgrossing the original by about $60 million, which is heartening for the studio, but one has got to think the writers and producers have to wonder what went wrong and why “Star Trek” went soft within North America; the territory where the franchise should be the largest. One would think they would actually want to work on the script a little bit too.

Abrams himself has even pooh-poohed the idea of a “Star Trek” and “Star Wars” arriving one year after each other let alone shooting in the same year. “If they want in that period of time [2015 and then 2016] and if 'Star Wars' goes forward as planned, it would obviously be a conflict. It depends when this movie would happen,” he told Trek Movie earlier this year.