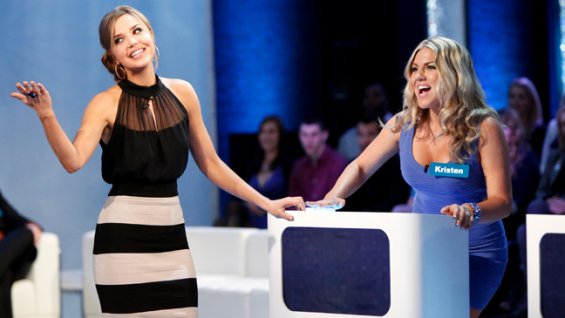 Debuting July 16 following the revival of classic improv comedy series Whose Line Is It Anyway?, Perfect Score puts a twist on dating by giving contestants the opportunity to win a date with a match as well as the chance to win $50,000 but only if they can find their true match.

Here's how it works: Each 30-minute episode will feature two friends competing against each other to see who can choose their most compatible partner from a group of 10 singles after taking a takes a compatibility test. The tests are then used to assign cash values to each match and the contestant who chooses the most suitable person — who would hold the highest cash value — wins the money and the date.

The Vampire Diaries actress Arielle Kebbel takes on hosting duties on Perfect Score, and The Hollywood Reporter had a chance to speak to the actress/host about the new show, her surprising audition and why she is calling it "Singled Out for 2013."

The Hollywood Reporter: How did Perfect Score come to you?

Arielle Kebbel: I had been doing Rehash for The CW which recaps The Vampire Diaries each week, and that gives me experience in the [hosting] world. Before Rehash, I had never worked off the teleprompter. Coming from Florida, I did hosting work before I moved to L.A., and it’s a place I’ve been wanting to get back into for awhile. I got the call to audition for Perfect Score and I was up against a lot of people. I know that everyone was voting for me but I don’t think anyone actually expected me to get it.

Kebbel: The night before I was going over the materials like I would an audition because I didn’t know what to expect. I was creating fake people off-camera that I was going to talk to. [But] when I walked in the [audition room] the next day, there were producers, a live audience, fake contestants and music playing. We ran through it and they were like, “OK, are you ready?” It was a 22-minute screen test of the game show. [Afterwards] I turned to the casting director and said, “I have no idea what just happened, but I just had the time of my life.” I remember leaving there on such a high.

THR: The premise gives a different spin to the dating game show format. If this was on TV, would this be something that you would watch?

Kebbel: What makes our dating show special is it’s based on compatibility, so every contestant takes the same compatibility test before they come on the show and it knocks out any opportunity for physical attraction — for bias. The contestants are truly forced to go deeper than themselves and listen to these answers to the questions they’re posing and really connect to who they believe they’re most compatible with. There’s also money on the line. If you happen to choose your most compatible person, you win $50,000, which is nice. Even the contestants who didn't win, as soon as the show ended, the most compatible people would find each other on stage and start talking.

THR: Will the show kind of, you know revisit certain contestants?

Kebbel: Oh, trust me, I already have a whole list of things I want to do for season two. The producers are like, “That’s great; let’s get through season one.”

THR: What should we expect this season?

Kebbel: It’s Singled Out for 2013. It’s a totally fun show. It’s perfect to be premiering during summer hours right after Whose Line Is It Anyway?. We encourage the audience to participate. When the contestant gets the snip, they hang out in the losers’ lounge, so they’re still on stage. They’re still very much a part of the show. They’re making their own comments, yelling, hooting and howling. We put the contestants through crazy challenges and at the end of it all, you get to guess with the contestants who you think are you most compatible for. Nine times out of 10 the answer is pretty surprising.

THR: So what kind of challenges will we see the contestants go through?

THR: What would they have to do in that final round?

Kebbel: You have to watch and find out. There were a couple times the camera caught my jaw hanging wide open. And not be a complete spoiler alert, we had more than one contestant come on the show and win the $50,000, which is incredibly exciting. We had some tie-breakers as well.

THR: Is hosting something you’ll want to continue to pursue?

Kebbel: I’ve been very clear to reiterate that I’m not giving up acting to host. I’m very serious about continuing to do both. For me, I almost need one to balance the other, but it’s more about expanding myself and broadening my horizons.

THR: Switching gears a moment to The Vampire Diaries. Lexi dropped by Mystic Falls in an episode last season. Can we expect her to return?

Kebbel: She’s a great drive-by, isn’t she? I always say anything is possible in Mystic Falls, and [executive producer] Julie Plec has been wonderful to me and is a huge Lexi supporter and I am grateful for how [through] my passion for Lexi and Julie’s passion for Lexi and the fans’ passion, we have been able to keep this character alive. My goal is to continue doing that for as long as the opportunity is possible.

THR: What is your favorite Lexi moment?

Kebbel: The thing about Lexi is I love her one-liners. One of my favorite moments was the Lexi-Stefan hug this past season when they were reunited. That goes into them walking down the street walking and talking; you see the friendship and the love and support and the joy between the two of them in that quick moment. That’s all you need sometimes is a reminder of how special certain relationships are. One of my other favorites is — going back to the very first time we met Lexi — I'm talking to Damon, and I’m like, “Have you met you? You’re not a nice person.”

THR: Have you figured out a way to make sure she drops by The Originals?

Kebbel: I know, I know. Everyone’s asking. I keep telling the fans: “You guys come up with a way. You guys have kept her alive this far. Help get her on The Originals!”