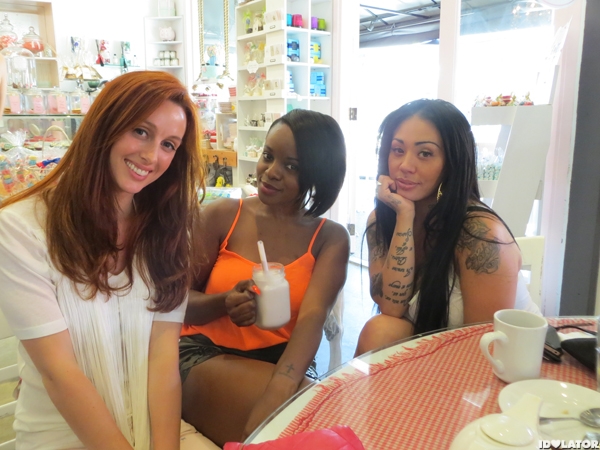 Mutya Keisha Siobhan are currently in Los Angeles to film the video for their gorgeous Dev Hynes-produced  single “Flatline” but the lovely ladies took some time out of their hectic schedule to meet the media. I headed over to Toast Cafe this afternoon (July 15) more than a little excited about hanging out with the original and — obviously — the best Sugababes.
By the time I got there, MKS had already been through five hours of interviews but the girls were still happy to chat. Particularly flawless English rose Donaghy, who picked my accent immediately and wanted to know more. Over the next hour or so, I found out some exciting tid bits about the new album, their Suga-history and even Buena’s butt implants.
1. The “Flatline” video has an LA theme and will be shot, at least partly, in Venice Beach.
2. Siobhan ordered Shakshuka for lunch. It turns out she’s a foodie and raved about eating in San Sebastian.
3. Keisha is travelling with her mom.
4. The girls spent yesterday drinking sangria by the pool of their rented Hollywood Hills house.
5. They all love Sydney.
6. Mutya explained her butt implants thus: “I like big bodies on men and women.” They have since been removed.
7. Their favorite Sugababes songs are “Overload” (Siobhan), “Caught In A Moment” (Keisha) and “Flatline” (Mutya).
8. When asked if there were any Suga-songs they didn’t like, Mutya volunteered “Red Dress”, while Keisha isn’t a fan of “Round Round”.
9. A new version of “Lay Down In Swimming Pools” will be on the album. Siobhan feels this song will resonate with fans of her solo work.
10. Siobhan ate a tiny chocolate muffin and fixed my camera.
11. Keisha plans to ride a mechanical bull at a bar on Sunset later this week.
12. Mutya says she had deja vu when they reunited, feeling like they had “done this all before”.
13. They are proud of their success on Soundcloud and are aware how many times their songs have been played.
14. “Flatline” will be rolled out internationally.
15. Quote of the day goes to Keisha: “I don’t claim Sweet 7!”
SOURCE
so happy they spent much time doing the press. it looks like they are trying the US market as well!
Tags: british celebrities, music / musician (pop), music / musician (r&b and soul)
Subscribe