It’s no secret that Elton John isn’t a fan of Catholicism, but he did sing the new Pope some praise in a recent interview. 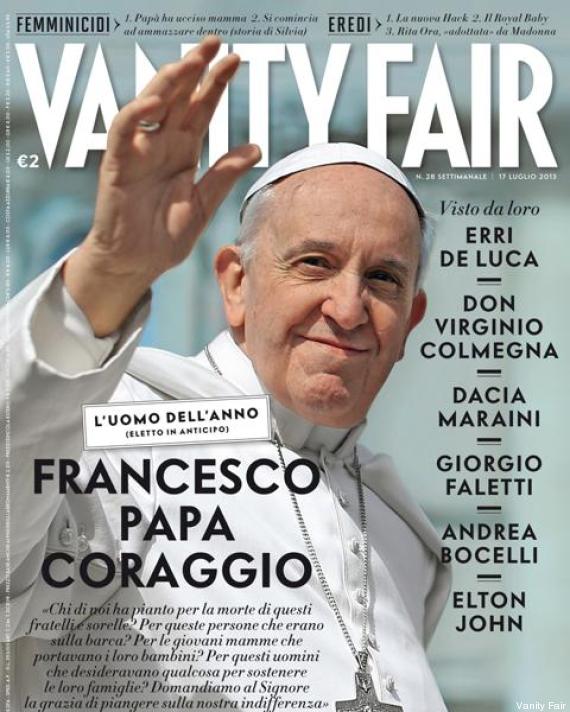 Pope Francis was named “Man of the Year” by editors of Italy’s Vanity Fair, and Sir Elton was asked what he thought of the pontiff receiving the honor. The 66-year-old said:

“Francis is a miracle of humility in the era of vanity… This pope seems to want to bring the Church back to the ancient values ​​of Christ and at the same time, [bring it into] the 21st century.

“If you will reach out and touch the children, the women, the men who live with HIV and AIDS
– often alone, and hidden by the silence – his beacon of hope will bring more light
than any advancement of science, because no drug has the power of love.”
Sir Elton John has previously criticized all religion for “hatred and spite against gays,” and indeed, how various Christian denominations handle LGBT issues has caused significant controversy and discussion.

But Pope Francis hasn’t really had much to say about homosexuality. Aside from some vague comments about a “gay lobby” in the Vatican, many have noted the absence of a public stance on the issue, especially when this year has seen so many dramatic developments for the gay community (DOMA, South America, etc).

Also complimentary of Pope Francis was opera singer Andrea Bocelli, who told the magazine that the new pontiff is “truly a gift from God.”

Are you a fan of Pope Francis?

Issuing a "Motu Proprio," a decree of his own initiative, Francis also said he would renew the Holy See's commitment to international conventions against organized crime and terrorism.

Under the changes, sexual violence and sexual acts with children, child prostitution and child pornography are cited in a broader definition of crimes against minors and punishable by up to 12 years in prison, a Vatican document showed.

Francis, who succeeded Pope Benedict in March, inherited a Church struggling to restore its credibility after a spate of scandals including the molestation of children by priests in a number of countries and an investigation into suspected money-laundering at the Vatican's bank.

The legal changes apply only within the Vatican City state but are meant to demonstrate that Francis is taking the various scandals seriously and aims to align Church policy with international legal standards.

The Survivors Network of Those Abused by Priests (SNAP) was unimpressed, saying his initiative might burnish the Vatican's image but "in the real world this changes virtually nothing (as it affects only) the 0.2 square miles of Vatican property."

SNAP urged the Church hierarchy to focus on having its personnel abide by long-established secular laws on sexual abuse and rooting out bishops who failed to protect children.

The Vatican was also shaken last year by the "Vatileaks" affair in which Benedict's butler, Paolo Gabriele, was convicted for stealing personal papal documents and leaking them to the media. He was pardoned by Benedict after being briefly jailed.

Litany of graft, mismanagement
Before abdicating in February, Benedict left Francis a top-secret report about leaks of the internal documents that alleged corruption, mismanagement and infighting in the Vatican administration.
Francis's decree includes stricter rules governing the disclosure of secret information or documents and stipulates a punishment of up to eight years in prison if they concern the "fundamental interests" of the Holy See, or Church government.
Pope Francis also said United Nations conventions on transnational organized crime, illegal drug trafficking and terrorism financing would be implemented as part of the changes.
Giuseppe Dalla Torre, president of Vatican City tribunal, said the state's penal system, based on Italian penal codes from 1889 and 1913, had been updated to deal with more modern crimes.
"The evolution of society and the economy, and the phenomenon of globalization have shown that there is a need to provide for new situations," he told a news conference.
"The problem of laundering dirty money is evidently a problem linked on one side with the globalization of the economy and on the other side to the expansion of a certain type of financial economy," he said.
The Vatican's bank, a byword for opaque and secretive dealings for decades, is at the center of an investigation by Italian prosecutors looking into money laundering.
A report by Moneyval, a department of the Council of Europe, last year identified failings in the bank and gave the Holy See a negative rating in several transparency-related criteria.
In June Francis set up a special commission of inquiry to reform the bank, seeking to get to grips with an institution that has embarrassed the church. The group held its first meeting on Thursday with the pope attending, according to the Vatican newspaper Osservatore Romano.