Cara Delevingne wants a Mulberry bag named after her 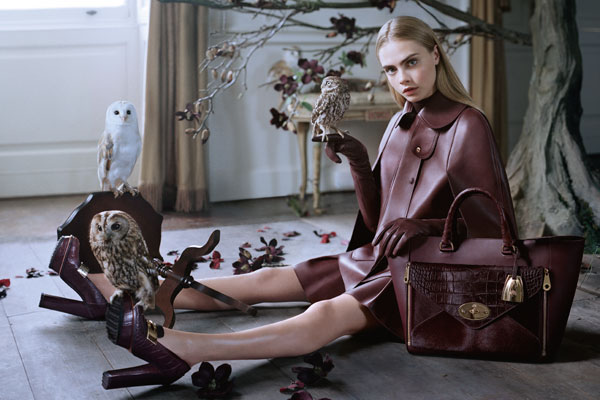 Women's Wear Daily reports that the campaign was shot on location at an 18th century house in Oxfordshire, England, by Tim Walker and art directed by Ronnie Cooke Newhouse. The ads will break in the August issues of British Vogue and Condé Nast Traveler.

Delevingne, 20, poses with Mulbery’s new Willow tote in the ads, but she told Grazia  that she now wants a Mulberry bag named after her.“Traditional fables, botanical prints and the earthiness of the countryside by night all played their part, and this sense of dark beauty was beautifully captured by Tim and Ronnie for the campaign.”

“My favourite Mulberry bag would be the Cara bag…actually that hasn’t been made yet!” she said.

“I want to design a Mulberry bag, there needs to be a Cara bag. I have so many ideas, Mulberry need to call me. And they have to let me design trainers too!”

She also gushed about how much she loves Mulberry.

“Mulberry is such an iconic brand - it’s British, and I love the bags and clothes,” she said.

“Plus the campaigns are inspiring - they have a tradition of working with such cool models and creative teams. Tim Walker shot this campaign - it’s not the first time I’ve worked with Tim - but it is my first campaign for Mulberry and I really admire his work. He’s an artist, a great visionary, so I was very happy to find out I was shooting with him again. “

She added that she posed with real owls — which caused some problems.

“It was an amazing shoot - I got to shoot with owls!” she said. “I love working with animals and especially owls. The best moments were when all the owls kept poo-ing on me - there was a real problem with poo on this shoot!”


Mods, this article is a few weeks old and the Mulberry campaign was already posted but this article wasn't. this bitch rn. She should work on her walk first.