Is the 'Lone Ranger' racist? 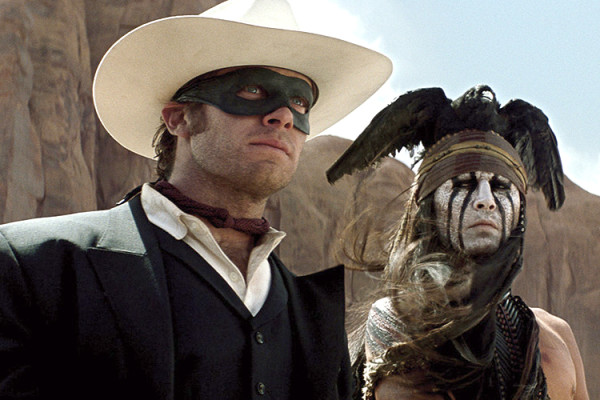 Disney’s The Lone Ranger opens in theaters today, but debate over the big-budget Western epic has been raging online for years, ever since Johnny Depp first said in 2011 that he wanted to make a movie of the radio and TV classic—and that, rather than playing the masked man, he wanted to play Tonto. As might be expected when a prominent actor decides to take on a character who is specifically a race other than his own, the controversy wasn’t far behind. Is it okay for Depp to play Tonto? Is it ever okay for someone to play a race other than his own?

Though American audiences are probably more familiar with the history of blackface, “redface” is likewise fraught territory. (Here’s a recent example: Michelle Williams dressed in stereotypical braids and feathers for a fashion spread this past March, and the response from the Native American Journalists Association that when a non-native person dresses up as a Native American it leads to problems, even if the magazine’s editors don’t see them.) Particularly for Disney, a studio with a track record that’s checkered at best when it comes to Native American characters—see: Peter Pan—the decision to cast Depp has raised big questions that are unlikely to be answered by one movie.


Years later, as the movie finally arrives in theaters, the debate continues.

Can someone tell me whether we're supposed to be offended by Johnny Depp's portrayal of Tonto or not? Must know for dinner parties/twitter.


The Twitter consensus for Dunham landed pretty firmly in the “be offended” camp but, for a number of reasons, the answer is more complicated than “if you have to ask, it’s racist.” Both detractors and defenders agree that, while it would have been a nice opportunity for a Native American actor to play the part, the issue isn’t so much the casting as it is the character.

And, though The Onion‘s satirical headline (“Ecstatic American Indians Praise ‘The Lone Ranger’”) may make it seem like an impossibility, there actually are some Native Americans who do praise the movie. One of those people is Comanche Chairman Wallace Coffey.

Coffey is an elected official for the Comanche people and was, according to a Disney spokesperson, an unofficial but respected advisor on the film. He says he doesn’t pay much attention to casting choices, but, as one with a deep interest in the story, he thinks it would have been nice to have a Native person starring in a big Hollywood movie. Still, on the day he spoke to TIME about The Lone Ranger, he had already seen the movie three times—and was looking forward to a fourth.

“I think it was a very realistic portrayal of a Native American. It’s got drama and it’s got a lot of comedy; it fits right in with Comanche culture because we are well-known as a humorous people,” he says. “In some instances [at screenings], it was only the Comanches that laughed, because we could relate to it.” Coffey adds that he was pleased by the spiritual elements of the Tonto character, as an accurate enough nod to the relationship between a Native American of that time period and the environment in which he lived. Depp, who has said he has some Native American heritage (but unsure about tribe or extent), has also personally reached out to the Comanche people, an effort that Coffey says has been much appreciated. Depp was made an honorary member of the Comanche nation more than a year ago, and he attended the Comanche Fair last October as an honored guest.

Coffey says he’s happy whenever he sees Native Americans in pop culture, which includes those non-Depp characters in The Lone Ranger (played by actors like Gil Birmingham and Saginaw Grant). “This is just the beginning, is my thinking. It opens the doors for more creative visions with regard to Native Americans in the future,” he says. If there’s a sequel, he hopes even more American Indians get to be involved in it.

On the other side of the issue is Adrienne Keene, a blogger and graduate student who has been following Depp’s vision of Tonto since the beginning. Her popular blog, Native Appropriations, tracks and dissects usage of American Indian culture—and that’s where several of Lena Dunham’s followers directed her to for more information on the topic. Keene says that, while she was at first cautiously optimistic about what The Lone Ranger could do, the lead-up to the film’s release convinced her that the depiction of Tonto was extremely problematic.

“Before the initial photo [of Depp in character] even came out, there had been some discussion about the film and quotes from Johnny Depp saying that he wanted to use the film as an outlet to reimagine what the Hollywood Indian could look like. I was holding out some hope that maybe it was going to be okay,” Keene tells TIME, speaking of Depp’s desire to elevate Tonto from his sidekick role and reverse racial stereotypes. “Then they released the first still.” In her initial blog post on the subject, based solely on production stills and Depp’s statements, Keene wrote: “You guys, I’m pissed off. Like for real. I had a teensy-tiny bit of hope that this wouldn’t be another othering-stereotype-filled-horror, but clearly I was so wrong.”

Keene says that, while many people have argued with her about why a fictional depiction in an action movie matters, she thinks the use of stereotypes in The Lone Ranger—Tonto’s communing with animals, his broken sentences, the hodge-podge of influences that went into his costume—will have a lasting legacy in American culture, compounding the very ideas that Depp has said he tried to reverse. At the heart of the matter is the fact that there just aren’t that many well-known American Indian characters out there, and the ones that do exist (Keene cites the werewolf characters from Twilight) play on stereotypes too. As such, there aren’t readily available representations for viewers to fall back on; without an accurate pop-culture idea of a real-life Native American in moviegoers’ heads, Tonto is less of an individual character than he is a key piece of the popular image of a large and diverse population. The stereotype is particularly detrimental for its fantastical elements, she believes: when a real group of people seems as mystical as say, werewolves, in every pop-culture depiction of the group, it gets hard to pay any attention to the real people who are alive today and have real issues and achievements of their own.

Now, Keene says, she’s glad about Depp’s casting, because it means a Native person isn’t “embroiled in that mess.”

But she still feels like she’s in “a difficult place” for speaking out. For one thing, Disney has peppered the Lone Ranger promotional campaign with support for Native American causes—for example, money raised by the movie’s premiere event went to the American Indian College Fund—so a lot of good came out the Tonto question, although Keene sees those efforts as “damage control” that should have been done before anyone questioned the company’s actions. (Keene readily acknowledges that some people, like Coffey, disagree with her.)

As for Depp, he told NPR that his version of Tonto has to give a peek at the stereotypes that exist so that, when the stereotypes are flipped, the audience can recognize it. Well-meaning efforts aside, Keene doesn’t see it that way. “It would have been really cool and powerful if Tonto was just another guy who happened to be Indian, if they didn’t have to go into the whole mystical, spiritual fantasy element,” she says. “Just let Tonto be a person. That would be really powerful.”