Greatest actor of his generation  ALL TIME to star in thriller Hotel 33. 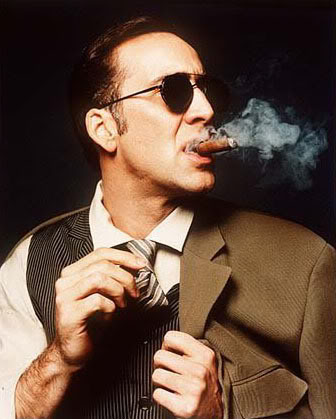 Oscar winner and "Ghost Rider" star Nicolas Cage is ready to check in to the surreal thriller "Hotel 33."

The film is based on purported true events. In 1953 Williamsport, PA, 32 people inexplicably disappear on the opening night of the posh Grand Hotel. While Detective Kaminsky (Cage) is on the case, four teens break into the now-abandoned hotel to explore the ruins and party down. Things get seriously complicated for Kaminsky after two of the teens also end up missing.

Newcomer Kellie Madison wrote the script and will direct the film, which is aiming for a September start date.

"Hotel 33," will be produced by Randall Emmett and George Furla, and executive produced by Envision Entertainment’s Remington Chase, Stepan Martirosyan and Vitaly Grigoriants, and Foresight’s Mark Damon. Foresight will also handle international sales. Open Road Films is distributing the film theatrically in the U.S.
"This is a real-life mystery based on factual events -- a frighteningly look at the nature of evil, exploring and revealing timeless truths about the dark side of human nature, fear and the paranormal and will leave audiences shocked and captivated for years to come," said Kellie Madison in a press release. "It’s going to be fantastic!!!!"
"Up-and-coming talent Kellie Madison has done a wonderful job in giving the script a seriously terrifying tone," added Foresight’s Mark Damon. "Nicolas Cage is of course one of the great actors of our time and is perfectly suited to the role of the iconic haunted detective."
"This is now the fourth movie Nic and I have worked on together.  He is not only a friend but a true talent and I cannot be more excited to be working with him again," Emmett/Furla’s Randall Emmett commented.

Cage will next be seen in David Gordon Green's "Joe" and Emmett/Furla’s "The Frozen Ground," alongside John Cusack, Vanessa Hudgens, and 50 Cent. There's also a sequel to DreamWorks Animation's "The Croods" in the works, which will likely once again feature Cage's golden speaking voice.
source

Cage goes to Nevada Senate to argue for tax incentives for filmmakers. 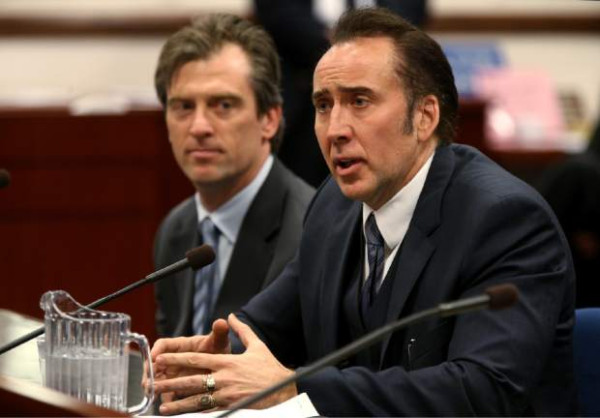 Actor Nicolas Cage testified Tuesday before the Senate Finance Committee in support of drawing filmmakers to Nevada by awarding them tax credits they can sell to other businesses.

Senate Bill 165 by Sen. Aaron Ford, D-Las Vegas, would award movie producers credits against the live entertainment, modified business, gaming and insurance premium taxes up to 20 percent of the value of goods and services purchased in Nevada. But because those movie makers can’t directly really use any of those tax categories other than the modified business tax, Ford confirmed that the vast majority of them would be sold on the open market to businesses such as casinos that can apply them against what they owe the state.

“That’s what the bill contemplates,” he said.

The bill would cap credits allowed in any single year at $35 million, with no more than $6 million going to any single production. But unused credits from one year could be carried over to the next.

Cage, who lives in Las Vegas, told the committee he has “four scripts right now that could easily be shot in the state of Nevada.”

He said actors, directors and the industry itself would all like to come to Nevada but need incentives that at least match what other states are offering.

“California has made it economically unfeasible to film there,” Cage said.

He said the industry gets incentives elsewhere but “is tired of filming in other states.”

“They’re thirsting for something new, close to Hollywood,” Cage said.

He said bringing the film industry to Nevada would not only be financially rewarding but would draw many more visitors.

“People see something in a movie and everybody wants to go where it was shot,” he said following the hearing. “It happened with ‘The Lord of
the Rings.’ Everybody wanted to go to New Zealand.”

“Nevada should be a top destination for film,” she said. “Unfortunately, we’re letting other states pass us by because we failed to offer tax incentives.”

They argued the only thing preventing those filmmakers from coming to Nevada is the incentives offered by other states. There was testimony that, because of those credits, movies and at least one TV series supposedly set in Nevada is being filmed in Louisiana, South Carolina and New Mexico.

Carole Vilardo of the Nevada Taxpayers Association provided the only testimony against SB165, saying similar tax credits are “coming under scrutiny in other states.”

Several times during testimony, witnesses cited Louisiana as an example of a state drawing film companies because of its incentives.

That state is beginning to question the incentives it gives “because the return on investment is not there,” Vilardo said.

“You’ve got some reporting in there, but don’t specifically look at return on investment,” she said of SB165.

She also questioned why the bill allows incentive tax credits for a laundry list of things other than films, including video games.

Vilardo said the way the bill is structured and the taxes it allows credits against would create a business of selling those credits. She urged the committee to make the credits a pilot program for two or three years if they decide to pass the program.

The committee took no action on the measure.