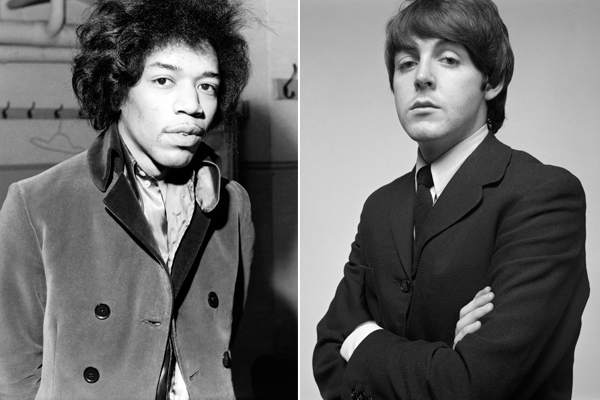 It's long been known that Jimi Hendrix and Miles Davis were making plans to record together the year before Hendrix's death in 1970, but it turns out the pioneering guitarist and jazz trumpeter were hoping that Paul McCartney would join them on bass. Hendrix, Davis and jazz drummer Tony Williams sent a telegram on Oct. 21, 1969, to the Beatles' Apple Records, hoping to get McCartney in for a session.

"We are recording and LP together this weekend in NewYork [sic]," reads the note, according to The Associated Press. "How about coming in to play bass stop call Alvan Douglas 212-5812212. Peace Jimi Hendrix Miles Davis Tony Williams."

It's unclear if McCartney was aware of the request. The telegram advises him to contact producer Alan Douglas, and is seemingly an impromptu note asking McCartney to visit New York from London on short notice. Beatles aide Peter Brown responded the next day, telling Hendrix and Davis that McCartney was out on vacation and wasn't expected back for two weeks.

The telegram was poorly timed for McCartney. That same day, DJ Roby Yonge from New York's WABC furthered the rumor that McCartney had died in a car crash and had been replaced by an imposter. The Beatles themselves were also dealing with internal strife that likely wouldn't have eased with a potential McCartney-Hendrix-Davis collaboration.

Davis said in his 1990 autobiography that he sometimes jammed with Hendrix at his New York apartment, but finances and busy schedules prevented them from entering the studio. Hendrix biographer Charles Shaar Murray and others say Davis sought $50,000 up front for the session. Davis also wrote in his book that he and arranger Gil Evans were in Europe planning to record with Hendrix at the time of guitarist's death in London.

The telegram, a part of the Hard Rock Cafe's memorabilia collection, was purchased at an auction in 1995. But it's received more attention with the March release of People, Hell and Angels, a collection of 12 previously unreleased recordings from Hendrix. "[The telegram is] not something you hear about a lot," said Hard Rock historian Jeff Nolan. "Major Hendrix connoisseurs are aware of it. It would have been one of the most insane supergroups. These four cats certainly reinvented their instruments and the way they're perceived." The telegram is now on display at the Hard Rock Cafe in Prague in the Czech Republic.