* This is a summary of 3 articles. One by a huffpo writer, Eva's Response to that, and a Cosmo Latina writer's response to Eva. I'm posting the summary because I know how much ONTD likes to read . Links to the full articles are all over this post. 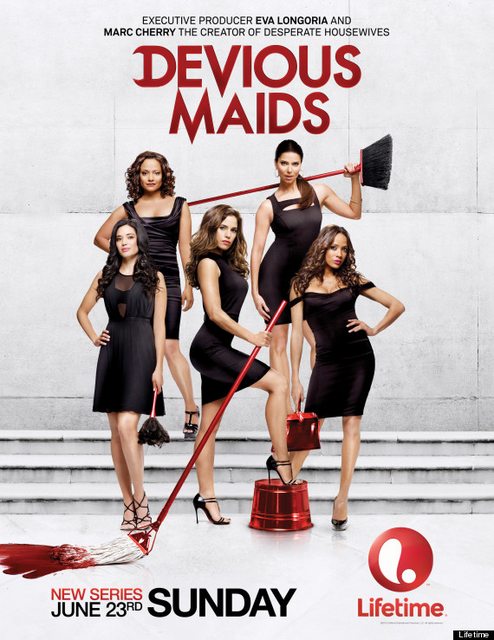 Since we last posted the promo trailer on the site for the upcoming Lifetime series, there has been more backlash against the Eva Longoria-produced TV show Devious Maids, directed by Desperate Housewives' Marc Cherry, and starring Dania Ramirez, Ana Ortiz, Roselyn Sanchez, Edy Ganem, Judy Reyes and Susan Lucci.

If you haven't been following any of it, apparently The Huffington Post's Tanisha Ramirez posted an op-ed piece criticizing the show stating it was a "wasted opportunity" and that "the minute-long trailer manages to efficiently portray Latinas as hypersexual, nosy, scheming and, at times, totally invisible domestic servants, one set of pushed-up breasts, devilishly squinted eyes and sassy hair flip at a time. What the trailer doesn’t do, however, is allude to the supposed actual premise of the show."

Exactly! Well, Longoria fired back, you know since Latinas are "fiery" and all; I kid, but the producer penned THIS response in the defense of the show, in which Longoria said the following:

Stereotypes are constructed and perpetuated by those who believe in them. I choose not to. As an executive producer, I choose to break the cycle of ignorance by bringing to light something we have not seen before, a deeper, more complex side to the women who live beyond the box that some choose to put them in. The only way to break a stereotype is to not ignore it. The stereotype we are grappling with here is that as Latinas, all we are is maids. And yet, this is a show that deconstructs the stereotype by showing us that maids are so much more.
To be fair, this is only an excerpt of Longoria's full piece, which you ought to read.

There was yet another response to the show and/or reply to Longoria's latest rebuttal, this time from Cosmo Latina's editor-in-chief Michelle Herrera, who, after seeing the show, poignantly articulated many of the qualms some of us have with it:

Many of my family members have worked as maids, waitresses, factory seamstresses and janitors. I watched my mother come home from jobs where she took orders, cleaned floors, and answered to wealthy women. But here's the difference between them and the women shown: In our house, the priority was finding a better life, whatever it cost. My mother didn't waste her time trying to seduce "el patrón," "gossip about her bosses," or beg for their mentorship. When she left her job, she was a comedian, an art aficionado, and a lover of literature. She took classes and studied books, ours and her own, so that we could all build a better life together. She built mentorship groups and did community service. And she showed me the hustle and self-sufficiency that made me the woman I am today, proving that there were no boundaries to what we could we do. For her, our place in "that house" was to run things, not to wear a uniform.
By the way, read Herrera's full piece HERE, in which she also adds, "You told us you lived in a West Hollywood "sorority house" with other powerful women. I can only imagine the conversations that go on at your kitchen table; I'm sure your fans would love to hear about them. What if there were a show about that?"

Yikes! I can't say I don't agree with Herrera, but I'll refrain on more commentary until I've seen the show, at least the first couple of episodes, which begin on the Lifetime network June 23.

Will you be watching? Thoughts?

source, 2, First article, Eva's response, Cosmo latina editor whose views are hers and not that of Cosmo.

I saw some clips of this online and thought it was a joke or the old version which this series is based on.  They have been taken down now. btw, Eva would like you to know she is working on show about mother/daughter Latina lawyers so quit complaining.
Tags: eva longoria, latino celebrities, television - lifetime
Subscribe
Previous
← Ctrl ← Alt
Next
Ctrl → Alt →
Previous
← Ctrl ← Alt
Next
Ctrl → Alt →