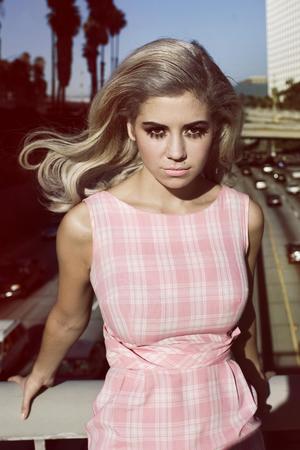 The 27-year-old singer posted on Twitter yesterday (May 10) that all of Banks's personality went into the social networking site.

She tweeted: "All your personality goes on Twitter. IRL you have nothing left to give."
Though the tweet did not include any names, Banks was quick to respond to Diamandis's message. She wrote: "Lol I see this one thirsty singer from the UK sub-tweet about me all the time.
"She better shut up before I steal her look & sound."
She continued: "B*tches think they're clever and rude, but trust me, I'm ruder.
"I can't stand a scared b*tch."

This is not the first time 21-year-old Banks has hit out at other celebrities on Twitter. In March, she openly wished death and excrement on the Stone Roses and has directed homophobic slurs at blogger Perez Hilton.
She has also released a diss track in response to rapper Angel Haze.
Source: DigitalSpy
lol your butthurt can be seen from Pluto, Azealia. Also Marina didn't make names. She's not the thirsty one tbh
Tags: azealia banks, marina and the diamonds
Subscribe
Previous
← Ctrl ← Alt
Next
Ctrl → Alt →
Previous
← Ctrl ← Alt
Next
Ctrl → Alt →