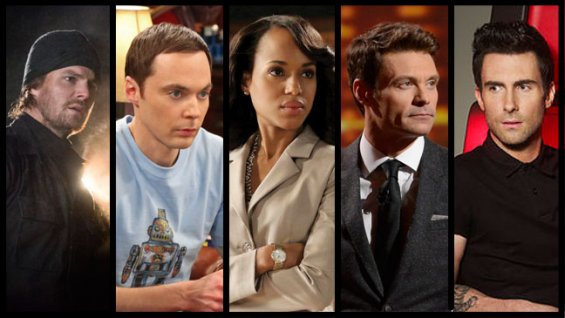 As the five broadcast networks prep their nearly 100 pilots ahead of May's upfront presentation to Madison Avenue buyers, executives must weigh the options of bringing back returning favorites and make decisions on the numerous bubble shows that currently line their respective schedules.

Here's The Hollywood Reporter's handy guide to help keep track of what's coming back, what's canceled and what will be new to the 2013-14 schedule for Fox, CBS, NBC, ABC and The CW. Keep checking back through upfronts as we continue to update this accordingly.

Killer Women*
Logline: It's hard to fit in when you're the only woman in the notoriously male Texas Rangers, but that doesn't stop Molly Parker (Battlestar Galactica's Tricia Helfer) -- our ballsy, beautiful badass who knows how to get to the truth and isn't afraid to ruffle a few feathers on her way there. Based on the Argentine series Mujeres Asesinas.
Cast: Tricia Helfer (Battlestar Galactica), Marc Blucas (Buffy), Michael Trucco, Alex Fernandez, Marta Milans
Team: W Hannah Shakespeare (The Raven); EP Sofia Vergara; EP/D Martin Campbell
Studio: ABC Studios, Electus, Latin World Entertainment

Once Upon a Time in Wonderland
Logline: In Victorian England, the young and beautiful Alice (Sophie Lowe) tells a tale of a strange new land that exists on the other side of a rabbit hole.  An invisible cat, a hookah smoking caterpillar and playing cards that talk are just some of the fantastic things she’s seen during this impossible adventure.  Surely this troubled girl must be insane and her doctors aim to cure her with a treatment that will make her forget everything.  Alice seems ready to put it all behind her, especially the painful memory of the genie she fell in love with and lost forever -- the handsome and mysterious Cyrus (Peter Gadiot).  But deep down Alice knows this world is real and just in the nick of time, the sardonic Knave of Hearts (Michael Socha) and the irrepressible White Rabbit (John Lithgow) arrive to save her from a doomed fate. Together, the trio will take a tumble down the rabbit hole to this Wonderland where nothing is impossible.
Cast: Sophie Lowe, Peter Gadiot, Michael Socha, Emma Rigby, John Lithgow Paul Reubens(voicing the White Rabbit)
Team: W/EP Eddy Kitsis, Adam Horowitz; EP Jane Espenson, Zack Estrin, Steve Pearlman
Studio: ABC Studios

Chicago PD
Logline: The Chicago Fire spinoff revolves around two different groups: Uniformed patrol cops and the Intelligence Unit, the team that combats the city's street major offenses. Leading the Intelligence team is Sergeant Hank Voight (Jason Beghe), a man not against skirting the law in the pursuit of justice. Demanding and tough, only those who can take the heat survive under Voight’s command. Take Detective Antonio Dawson (Jon Seda) -- despite his troubled history with his boss, Dawson has ambitions of running the unit … so if that means facing off against Voight every day, he’ll persevere. From the street cops with dreams of moving up to the elite crew who are already in, “life on the job” is a daily challenge. The enormous responsibilities that come with the territory take an emotional toll, as we’ll find when we follow the personal lives of our characters outside the walls of District 21.
Cast: Jason Beghe, Tania Raymonde, Scott Eastwood, Kelly Blatz, Melissa Sagemiller, Jon Seda
Team: W/EP Derek Haas, Michael Brandt, Dick Wolf, Matt Olmstead; EP Peter Jankowski, Danielle Gelber; EP/D Joe Chappelle
Studio: Universal Television, Wolf Films

The Blacklist
Logline: The world's most wanted criminal mysteriously turns himself in and offers to give up everyone he has ever worked with. His only condition is he will only work with a newly minted FBI agent (Megan Boone) with whom he seemingly has no connection.
Cast: James Spader, Megan Boone, Ryan Eggold (90210), Diego Klattenhoff, Harry Lennix, Ilfenesh Hadera
Team: W/EP Jon Bokenkamp (Perfect Stranger); EP/Showrunner John Eisendrath (Alias); EP John Fox, John Davis
Studio: Sony Pictures Television, Davis Entertainment