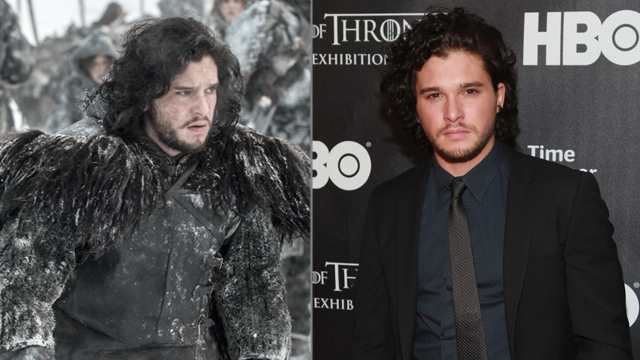 “It was very funny,” Kit tells AccessHollywood.com of the show’s most recent “GOT”-themed sketch, which had its cast playing contestants, competing in a “Game of Thrones” game. “I’m a big Zach Galifianakis fan, so I just found it hilarious, and Nikolaj [Coster-Waldau, who made a cameo in it] was funny.”

Just a year ago, “SNL” player Taran Killam actually impersonated the Englishman in another sketch about the drama, and down the phone line from Canada (where he’s been shooting the film “Pompeii”) Kit admits to Access he found Taran’s work to be on point.

“I saw that other one they did and it’s a horribly accurate impression of me,” he laughs.

As for Kit’s work — his portrayal of Jon Snow has not only been accurate, but compelling. From Season 1, Kit’s Jon has fit in closely with the Jon of George R.R. Martin’s “A Song of Ice and Fire” novels: a young man who grew up in a noble family (but without the perks of their name), suffered emotional abuse at the hands of his stepmother, and left home determined to live up to an idealized version of nobility he couldn’t have in the Seven Kingdoms, by dedicating the rest of his life to the Night’s Watch.

It didn’t quite turn out the way Jon planned. He entered into the Wildling camp at the start of Season 3, and later, broke his chastity vow for a feisty, flame-haired woman named Ygritte. And for those who haven’t read, “A Storm of Swords,” and don’t know what’s on the way, Kit’s put a real question in TV watchers’ minds over where Jon’s loyalties lie.

One place it was clear they do exist is in self-preservation. After Orell tried to cut the rope holding Jon and Ygritte hundreds of feet above the ground in last Sunday’s “The Climb” episode, Jon managed to save himself and his girl with some quick thinking. And in our new interview with the actor, Kit told Access about preparing to film the epic, action-packed scene, Jon’s feelings for Ygritte and the trouble that lies ahead for his character as the season continues.

Access: Last Sunday night, ‘The Climb’ episode of ‘Game of Thrones’ aired. Mackenzie Crook, who plays Orell, told us you actually had to have ice wall climbing lessons. What does that entail?

Kit Harington: They’re very thorough HBO and also, [we knew] we we’re going to be doing this big scene where we climb The Wall, so… they sent us to an ice wall in London and we had a bit of experience. But, the actual Wall itself was very different from that. It’s an incredible set that they built in Belfast. They built this 50 foot section of like plasters and wax and you could actually climb it with picks. We were being winched up and down that all day, for like three days or four days. With this series, every now and again you walk on [set] and you see what all the guys in ‘Thrones’ have built and that was one of those, ‘Wow!’ moments of like, ‘This must have cost you a fortune and it looks incredible.’ It was an amazing experience.

Access: There was a big moment in Sunday’s episode where Ygritte told Jon that she doesn’t believe that he has turned over a new, Wildling leaf — and he doesn’t deny it. And she says, I’m your woman, don’t betray me. How big of a deal was that for Jon? She put a lot on him right there.

Kit: He has sex one time and she’s on him (laughs). … I think he’s in the early stages of love with her. He’s fallen in love with her after that cave scene and [she turns] around and [says], ‘Don’t betray me,’ and he knows inside himself that he may have to. He hasn’t quite worked out what he needs to do yet, whether he’s part of the Night’s Watch, or whether he is now hers. I think it’s very confusing for him and it’s a big moment, especially after the episode you’ve just seen where they climb The Wall. I think that’s where their love is sort of solidified, you know, that kiss at the end. It’s very hard for him because he cares very deeply for [her] and yet, he knows that he also cares very deeply for the Night’s Watch and Samwell and all of his friends back there. So, again, poor old Jon is stuck in a kind of huge turmoil about what he does next. 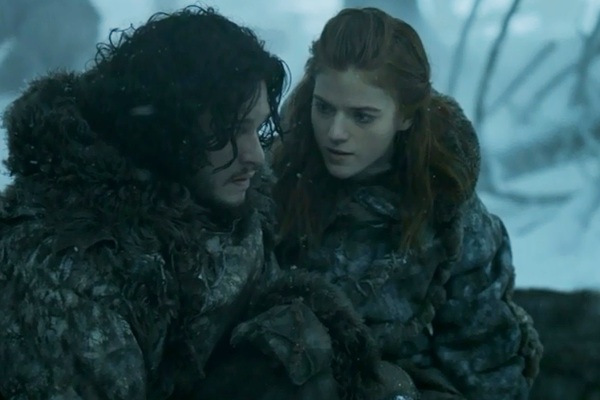 Access: Do you think he realizes he’s responsible for her at this point? Because if he were to turn, the wildlings would probably kill her because she brought him into their ranks.

Kit: Yeah, he does… It’s why in one of the episodes he says, ‘I don’t need you to look after me, I don’t need you to protect me.’ He’s saying to her, ‘Please don’t stand up for me because I don’t want you to get hurt.’ Ygritte, from the moment she met him, has decided this is the man she wants, this is the kind of one that’s gonna look after her and he doesn’t have much choice in the matter because he can’t reveal who he really is. But, we saw in that last episode, she tells him, ‘I know that you’re not one of us, but your mine,’ and that’s different. ‘This isn’t about factions, this isn’t about oaths to different parties, you’re mine, we’re together,’ and that’s something he’s not heard before and not considered before. It’s a big moment in that last episode and one me and Rose [Leslie] wanted to get right, because in this story and without giving too much away [about] what happens — it’s one of the rare, real relationships. There’s real love between them and he finds it very difficult to sort of know where his heart lies in the end, I think.

Access: You’ve said people were rooting for Jon to ‘get laid,’ and now that he has — and is apparently good at it — what’s the reaction been?

Kit: I think it’s nice that loses his virginity (laughs); I think it’s a really nice thing. What I was hoping when people [watched] that scene is that they were going, ‘Yes! Get in there! Nice one! Brilliant!’ I think it should be a celebratory moment in this very bleak world that these two people have this wonderful passionate moment, and when I read the books I loved that moment and it was one I was looking forward to from day one. It’s weird that it happened. It’s like where does Jon go now? What does he do now? 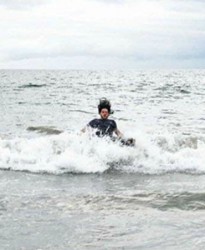 Access: It seemed like they were really kind to you nudity-wise. Was it a relief to you how they filmed your scenes?

Kit: There’s a wide shot of the only time you actually really see me nude, [and] actually, [it’s] not me it’s a body double (laughs). The reason that is, is [because] at that stage — that was one of the first things we shot — my ankle was still bad and I couldn’t jump into the hot tub that they’d built so they had to get someone else to do it. … That’s not my arse.   (ok.....)

Access: Hilarious. So… in this weekend’s episode, Orell — it looks like you have to confront him. Clearly, he doesn’t like Jon Snow and he doesn’t have your back because he tried to cut you off The Wall.

Kit: Yeah, they really don’t like each other from the get go. … This man’s a threat to him. … I like most people I meet and I try and get on with everybody, but every now and again, you’ll meet someone that really rubs you up the wrong way and I think that’s what they’re like. He’s like, from the moment they meet, ‘You know what? I don’t like you and I’m actually really hoping I get to kill you.’ So we’ll have to wait and see what happens about that.

Access: There appears to be a big revelation on the way for Joe Dempsie’s character, Gendry, regarding his parentage. Are you jealous that it looks like he’ll find out who his parents are before Jon does?

Kit: Yes. Simply. Yes. I am. I’d love to know who Jon’s parents are. It’s one of those things that I always get asked and, I’m like, ‘I just don’t know, I’m sorry.’ And there’s only three people in this world that do know and I think if you set up a question like that – from the word go, you don’t know who his mother is — then you’ve got to answer it at some point. So I think we will find out, but it may not be for a little while.

Access: It seems like some people ask Emilia Clarke who she thinks is going to end up on the Throne so that she can answer Dany, but I’m pulling for Jon. Do you think he’s destined for greatness?

Kit: I think we wouldn’t be following him if he wasn’t, but I don’t think he’ll end up on the Throne. I mean I just couldn’t even guess where it ends, but I think him and Dany will meet at some point. I think that might happen because they’re kind of, you know, sort of [the] ice and fire thing — he’s up in the cold and she’s in the hot, and at some point maybe they’ll meet. I think I’ve said this before, but I’m a big believer that people who don’t want power are the ones who should probably have it and I don’t think Jon wants power, so maybe he’d be one of the better people to be on the Throne. But it’s a brutal world. Who knows?

“Game of Thrones” continues Sunday nights at 9 PM on HBO.