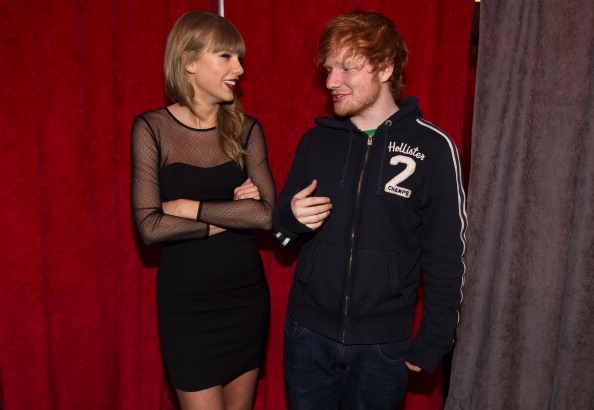 Taylor Swift's love life has been the subject of public ridicule recently, with many high-profile women mocking the singer.

Tina Fey advised Swift to take a break from dating: "She needs some 'me time' to learn about herself". Joan Rivers compared the 23-year-old's love life to the distances she and her daughter travel for their various TV commitments: "Taylor Swift's knees have been together more than Melissa and I."

Chelsea Handler joked: "She's just dated so many men. My theory about Taylor Swift is that she's a virgin, that everyone breaks up with her because they date her for two weeks and she's like, 'I'm not gonna do it.' And they're like, 'Oh, well, forget it. Then I don't want to date you. Every guy thinks they're going to devirginize her, and they're not. She's never going to get devirginized, ever, ever, ever, ever."

However, Swift's friend, tourmate and musical collaborator Ed Sheeran insists that the tales of Swift's love life are exaggerated, and admits that he feels protective of the singer.

“The rumor that she dates a lot of people is a misconception, because in the time that I’ve known her, which has been almost two years now, she has dated two people. Fact. And in her entire life, I think she’s dated around five or six people. I don’t like when people take shots at her because I do know her personally, and I think people get the wrong end of the stick,” he said.

“She’s so successful, and she’s so nice and sweet to everyone that she meets. There is nothing bad to say [except that] she was being pictured with a lot of dudes. I mean, I have female friends at home, who would not have the same reputation as Taylor in the media, that have been with ten times more people than her."

Since they met two years ago, Taylor and Ed have been inseparable. “It started off very strong,” the English-born singer-songwriter says. “We started off instant friends, and it’s been that since then. I think it would be incredibly unprofessional and idiotic for me to [date Taylor].” he says. “To go on tour for six months with someone and hook up with them just before you go out on tour, which is what people think we did—that’s just a really silly thing to do, because the tour would be very awkward by now, and it’s not, so that’s that.”
1 2