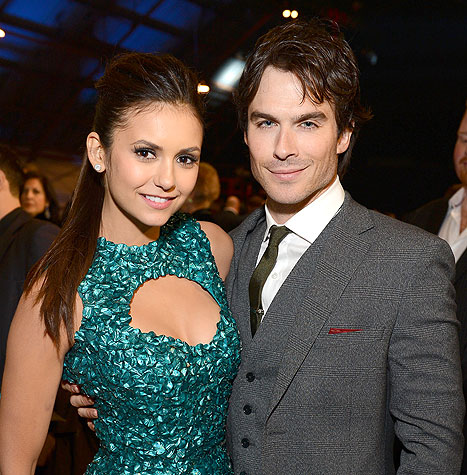 Nina Dobrev and Ian Somerhalder's showmance is over. The Vampire Diaries costars, who play Elena Gilbert and Damon Salvatore on the CW hit series, have called it quits after more than three years of dating, a source tells Us Weekly exclusively.

The couple, who first took their romance public in 2011, are "consummate professionals," the insider says, and "will continue to work together and remain best friends, which is where the relationship started."

Last fall, Dobrev opened up to Seventeen magazine about falling for Somerhalder. "I didn't want to be dating one of my costars -- my goal on the show was to be professional," she admitted. "But sometimes you can't help who you have a connection with, and you can only fight it for so long -- which I did for a really, really long time."

The Vampire Diaries is currently in its fourth season on the CW. In February, the network renewed the supernatural drama for a fifth season. Filming will begin later this year; in the meantime, Dobrev, 24, will spend the summer shooting the Fox movie Let's Be Cops, which also stars New Girl's Jake Johnson and Happy Endings' Damon Wayans Jr.

Reps for the actors declined to comment on the split.