Hannibal is without a doubt the most appetizing scripted show on television, all thanks to creator Bryan Fuller and culinary consultant Chef Jose Andres. The showrunner and chef spoke to TVGuide.com about how they make human meat look so tasty and what sets Dr. Lecter (Mads Mikkelson) apart from your average cannibal.


When Fuller got the opportunity to do Hannibal, Andres was one of the first phone calls he made. In fact, the famed chef isn't just the show's culinary consultant — he helped inspire the small-screen adaptation of the titular cannibal! "I had seen [Andres] talk about food and how passionate he was and articulate he was ... and he had such an enthusiasm that I thought Hannibal Lecter should have a similar passion for food that Jose had," Fuller told TVGuide.com. While most would balk at being compared to a murderer, Andres not only relates to Hannibal (while referencing the last scene in Anthony Hopkins' big-screen Hannibal he mused, "Holy cow, this could be me!"), but believes there's something innate in human DNA that attracts us to blood. "Every time we cut our finger one of the things we do ... is we take the finger to our mouth and kind of we suck the blood," Andres explained. "When I cut it, I'm like, 'Mmm, this is sweet man. I'm tasty!'" (idek, man)

Both Fuller and Andres try to focus on Hannibal as a chef and gourmand, instead of a people-eater. "What he does overnight is not my problem," Andres said. "I didn't create the dishes thinking in the negative side of 'What did he kill?' No, I created in the positive side ... so I had this amazing opportunity to dream of the life of Hannibal from the good perspective, even if he has a dark side."

Fuller explained that this is the same attitude Hannibal brings to his unique hobby. "He doesn't see himself as a cannibal. He sees himself as consuming cattle, or cattle-grade people," Fuller said. "I think serial killers and cannibals, part of what is fetishistic about them is the taboo of 'You do not eat your fellow man.' But Hannibal does not see his victims as fellow men; he sees them as less than [human]."

Yet for viewers, Hannibal still manages to be a very sympathetic protagonist. "He's still a villain and he's still a devil," Fuller allowed. "I think what makes it sort of likeable is that we all have that innate frustration with our fellow man — and ourselves — whenever we lose control or go rude. He just has a very punitive take on how the rude amongst us should be handled."

How Hannibal handles the rude people is, of course, eating them. And while we can all agree killing and eating people is bad (very, very bad), that doesn't mean it can't also look damn tasty! "You can hear our stomachs rumble when we're cutting these scenes together because the food looks so good," Fuller said. This complicated dichotomy between the mouth-watering aesthetics of Hannibal's dishes and the grisly knowledge of what they are is one of Hannibal's strongest features, allowing viewers to indulge in a perverse pleasure typically forbidden to them. "There's something fascinating introducing a very confusing, yet tantalizing element to cooking where you are what you eat. Quite literally sometimes." Though, Fuller clarifies that simply because Hannibal "eats the rude" doesn't mean that makes him rude by association. "I think he digests them," Fuller explained. "He's got a good fiber diet, so nothing sticks. The train keeps moving as it were."

PHOTOS: Bad guys we root for

Hungry for more? Check out the stories behind Hannibal's most memorable dishes:

Lung, Episode 1: According to Andres, the entire human body is consumable, and it's no coincidence the lungs are the first piece of offal we see Hannibal cook. They would be Andres' first choice to prepare from a human, as well. Specifically, the lungs of a smoker. "We're looking at a human being as a bioorganic crock pot that is smoking itself for our dining pleasure," explained Fuller. "It felt like it checked off all the boxes of Hannibal Lecter: [Smoking is] a rude habit and there's also an added benefit of that rude habit providing a unique smokey flavor for the tissue."

But as appetizing and beautifully prepared as the lungs were, Fuller notes the ghoulish quality to watching Hannibal squeeze the air out during his prep. "We all sort of feel in horror movies and in these horror situations that tightness in your chest and that [feeling] like, 'Oh my gosh. That's so startling, I can't breathe.' Then we take that concept ... and put in on the kitchen counter," Fuller said. "There's something about those things that go into adrenal overdrive when our life is threatened and then we see that they're just another beautifully prepared dish on Hannibal's table." 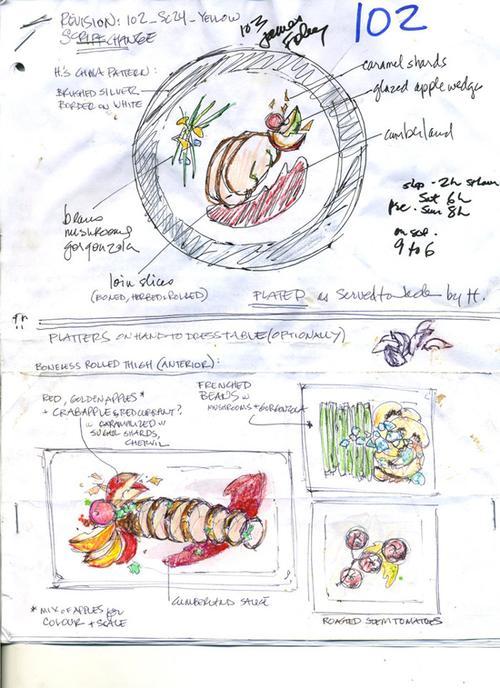 Loin, Episode 2: While Hannibal's supposed "pork" loin might be the most familiar, and therefore one of the least disturbing, dishes served, Fuller has a very different take. "There's something about the flesh of our backs being served up to Hannibal's guests being something so disturbing because it's coming at us from behind," Fuller said. "In my fandom for horror movies there's no greater scene than seeing a character and seeing something horrible coming up from behind that you see before they do. And so this loin dish is kind of an homage to those classic scenes." 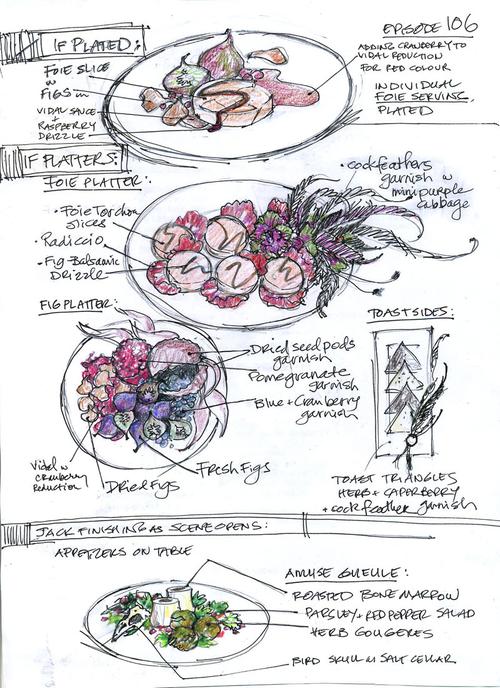 Foie gras, Episode 4: Fuller and Andres' collaboration goes far beyond the dishes Hannibal serves to his unwitting guests. In addition to selecting wines and even providing a signed copy of famed French culinary guide Escoffier to use as a prop, Andres gives crucial input to help shape the dialogue and inspired a conversation about foie gras, a delicacy that requires the force-feeding of ducks and geese to create a fattier (and tastier) liver. "In [the script for Episode 4], I suggested that one of the talks had to happen to show how food-intellectual Hannibal was," Andres said.  "You know, bringing the conversation about, 'Is foie gras humane or inhumane?'" Though he added that when discussing human foie gras, "the answer is obvious." 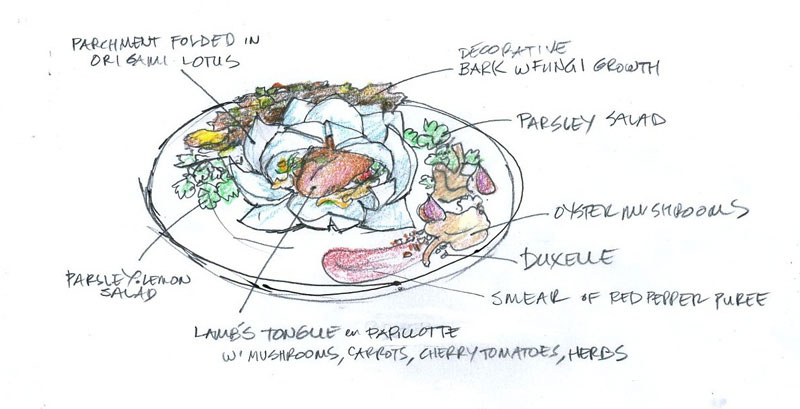 Tongue, Episode 5: When Fuller was wondering which choice cut Lecter might serve the annoying sanitarium director Dr. Chilton, it was Andres who suggested tongue, based upon the knowledge that the ancient Romans used to consume flamingo tongues.

But tongue wasn't the only body part being served up that night. Viewers have to look very closely (and exercise quite the twisted imagination) to puzzle out all the cannibalistic dishes Hannibal cooks up throughout the series, or else some delicacies will fly right by. "We had bone Jell-O in [Episode 5]," Fuller said. "That's something that I'll tweet about as it's going on, but I don't wanna put too much of it in the show, because it's an extra and it's kind of fun for people who are following live."

For more inside scoop on Hannibal's dishes and recipes, check out Feeding Hannibal.

I just thought this was an interesting/gross read. Keep the prayer circles going for this show!