*this might be pure speculation on the part of the OP.

"We end the season in a way that explodes the premise of the show," the showrunner tells THR of exposing the mole and Olivia and Fitz's relationship. 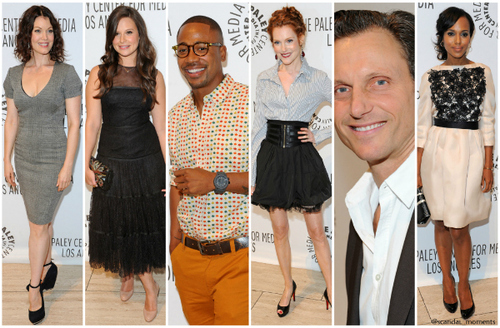 Mellie (Bellamy Young) has gone public with Fitz's extramarital affair and things are about to explode with only two episodes remaining in Scandal's sophomore season. As Mellie continues to put herself in the spotlight, the fabric of the ABC political thriller has been turned on its head as Olivia (Kerry Washington) and her Gladiators at OPA still have yet to identify the mole.

So who is it? Will the secrets between Olivia and Fitz (Tony Goldwyn) conspire to tear the newly reunited (and seemingly perennially doomed) couple apart?  How does John Barrowman's mysterious character figure into things? The Hollywood Reporter turned to Scandal showrunner Shonda Rhimes to get the scoop on what to expect as the season winds to a close.

The Hollywood Reporter: How does Mellie's declaration change the fabric of Fitz's presidency?
Shonda Rhimes: It's a big game-changing thing that Mellie did. Everything has been under wraps and it's all been very hush-hush until this moment. Fitz's declaration also changed the fabric of the show as well. Everything is turned on its end at the end of Thursday's episode. And next week, nothing is the same.

THR: Olivia hasn't told Fitz about the nature of her relationship with Jake (Scott Foley). How might that serve as one of the obstacles that prevents them from staying in this impossible relationship?
Rhimes: She hasn't told about Jake and by the way, Fitz hasn't told her that he murdered somebody, so they have some things they said he murdered somebody, so they have some things that they might need to discuss! (Laughs.) They have a bit of baggage. Will they discuss them? That remains to be seen. Jake is a very is very interesting character who has some people rooting for him, some people think he's a good guy, some people think he's a bad guy, nobody knows for sure what's going on there. As we head into the finale, you're going to start to discover more of what that's about.

THR: Cyrus (Jeff Perry) isn't the mole. How will Huck use Charlie (George Newbern) to get to the bottom of who's behind B613? The promo shows Huck has Charlie tied to chair.
Rhimes: Huck (Guillermo Diaz) has his problems with Charlie in general. Charlie was responsible putting him in the crate and Huck has some issues that he needs to work out with Charlie in general but we're also going to discover more and more what Charlie is up to and what he's doing and what he knows as well as who he's working for.

THR: What's the significance of "B613"? We're dying to know!
Rhimes: That remains to be seen, it's a mystery!

THR: David (Josh Malina) has been inching closer toward becoming a Gladiator. Is he really on that trajectory or could he be the one who betrays Olivia considering she turned his life upside down?
Rhimes: He's been in and very helpful. I feel like David is in a really interesting place because is he really one of them? Is that wishful thinking on his part? Is it wishful thinking on their part? That remains to be seen. I like him in OPA, I find him charming there.

THR: How does John Barrowman factor into things?
Rhimes: He's in the penultimate episode and plays a fixer with a very surprising client.

THR: How will the finale set up the likely third season compared to the cliffhanger that was the mystery of Quinn Perkins?
Rhimes: It leads into it quite well. We're going to leave everybody over the summer, I hope, with their mouths hanging open a little bit asking how the hell they're going to get out of this, which is our goal. We know how we're ending the season and now we're trying to figure out how we're getting out of it (laughs). We end the season in a way that explodes the premise of the show in a way that's good and strong and hopefully sticks with bold story telling.

THR: As you look ahead to season three, could we see Jasika Nicole return as Huck's wife?
Rhimes: We loved her and I'm a huge fan of hers from Fringe. She was wonderful and she and Guillermo were so wonderful together, they have a lovely energy together. Possibly. It would be nice because that was a story that the minute I saw that start to play out, I wanted to see what happened next and down the road. So possibly.

What are you looking forward to seeing on Scandal? Who do you think the mole is? Hit the comments with your best guesses. Scandal airs Thursdays at 10 p.m. on ABC.