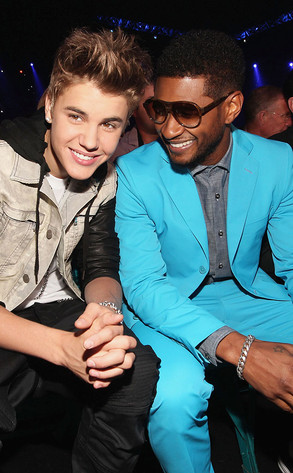 Did Justin Bieber and Usher not have "Somebody to Love" before De Rico came along?

That is what Devin Copeland (who performs as De Rico) is claiming in a $10 million copyright infringement lawsuit that alleges he showed Usher a tune of the same name and the R&B star usurped it for Bieber's My World 2.0.

Copeland, who is suing along with his writing partner Mareio Overton, alleges that his album 2008 My Story II contained "Somebody to Love" and he and Overton applied for and were granted the copyright.

In the lawsuit, filed Thursday in U.S. District Court in Virginia, Copeland states that he then met with scouts from major labels such as Island, Sony and RCA, who then brought My Story II to various artists, including Usher.

"Without any authority or consent," the suit states, "[Manager Jonetta Patton] and Usher conspired with songwriters and producers...to directly copy Plaintiffs' song 'Somebody to Love,' intending to appropriate Plaintiffs' intellectual property as their own."

Heather Bright, who is officially credited with cowriting the Bieber track with production team The Stereotypes, is also named as a defendant, along with Patton, Universal Music Corp. and Sony/ATV Music Publishing.

Usher, who recorded the track as a demo for his own Raymond v. Raymond before handing it over to his protégé, later rerecorded the official remix, which was released on June 25, 2010.

According to the suit, it was Overton who heard Bieber's tune on the radio in the summer of 2010 and immediately called Copeland about it. "Prior to that time, neither plaintiff was aware of the Bieber version," the complaint states.

Copeland and Overton are asking for at least $10 million in damages for alleged copyright infringement, contributory infringement and vicarious infringement, as well as for a permanent injunction preventing Bieber, Usher and their fellow defendants from laying any further claim to the song's copyright.