Ryan Seacrest Pays Julianne Hough Not to Reveal His ‘Unusual Appetites in the Sack’? 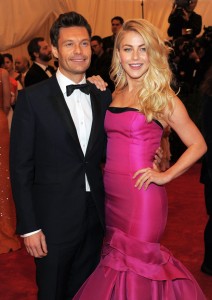 “Ryan Seacrest’s checking account gets a lot of activity when he breaks up with a girl,” begins a piece from Star, which claims the “American Idol” host is “trying to buy” his ex Julianne Hough’s silence.
So, what does he supposedly want her to keep quiet about?
According to the tab, Seacrest has “some unusual appetites in the sack — so to avoid airing his dirty laundry, he coughs up the cash to keep his exes happy… and quiet.” The mag alleges that after splitting from Hough, he “bought her a $3 million home as a parting gift.”
Star’s so-called “source” says, “Ryan is a great boyfriend and an even better ex-boyfriend,” adding, “Not that Julianne would ever badmouth him, but now she wouldn’t dream of saying he was anything but a great guy.” Yes, it’s true that Hough wouldn’t talk badly about Seacrest, but it has nothing to do with some sort of bribe. This “report” is just another lame attempt at prolonging the drama of his and Hough’s breakup.
A source close to Seacrest tells Gossip Cop the mag’s claims are “completely ridiculous.”
Source

It wouldn't surprise me, tbh.  He seems obsessed with his image.  I think I'd actually like him more if I found out he was closet sex freak.
Tags: american idol (abc), breakup, dancing with the stars (abc), television
Subscribe