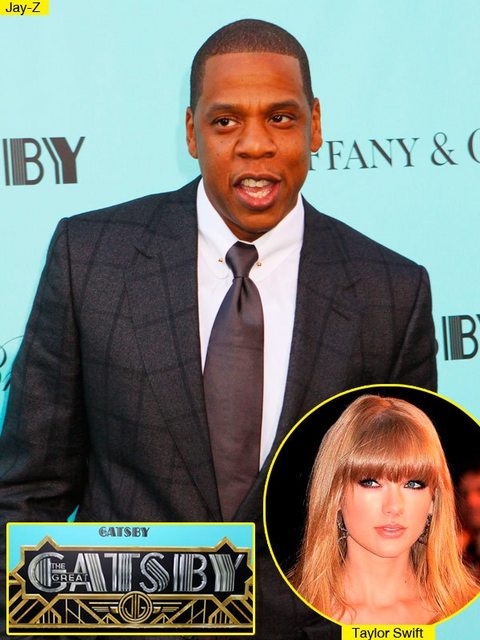 Kanye West interrupted Taylor Swift's acceptance speech for the Best Female Video award at the MTV VMAs way back in 2009, but the incident seems to be still on the mind of his friend Jay-Z.

In '100$ Bill', Jay-Z's contribution to The Great Gatsby soundtrack, he raps that he "took that Taylor Swift to a hundred fucking million, bitch! I wish I could continue but... [laughs]". West himself has previously claimed that his interruption caused Swift to "have 100 magazine covers and sell a million first week".
At the time of the 2009 incident, a Rolling Stone journalist with backstage access reported that Swift was seen "hysterically crying". Swift's mother confronted West, who gave "a half-hearted apology in which he added he still thought Beyoncé's video was superior". In the event's press room, Swift denied having "any hard feelings" towards West and proclaimed herself a fan of his music. The following day, she discussed the incident during an appearance on The View and later said she had accepted West's "very sincere" apology.

Swift refused to discuss West in subsequent interviews, terminating a radio interview when the host refused to drop the subject: "I'm just honestly trying not to make it into a bigger deal than it already is. It's become more of a big deal than I ever thought it would be. It happened on TV, so everybody saw what happened. I just would like to move on. I've talked about this in one interview, and that was going to be it. It's not something I feel like we need to keep talking about."

However, after an initial truce, things turned nasty again in 2010. West remarked that it was "inaccurate" for Swift's Fearless to have been named Album of the Year at the Grammy Awards earlier that year. He said he failed to see what was "so arrogant" about his VMA interruption and described his actions as "selfless". He argued it was "just disrespectful" and "retarded" for Swift to be included in the same award category as Beyoncé. He added that "if it was the other way around" and Swift were an established artist who had "made the video of her career, do you think she would have lost to a brand new artist? Hell no!" Also that month, he claimed that, "If I wasn't drunk, I would have been on stage longer ... Taylor never came to my defense at any interview. And rode the waves and rode it and rode it".

Swift responded by performing "Innocent" at the 2010 VMAs. The Washington Post described the song as "a small masterpiece of passive aggressiveness, a vivisection dressed up as a peace offering". Other critics found Swift's performance overly serious and petty.

As recently as February 2013, West dissed Swift on stage: "Taylor Swift beat Beyoncé at the Grammys? Beyoncé be dancing in heels and s***."
Source