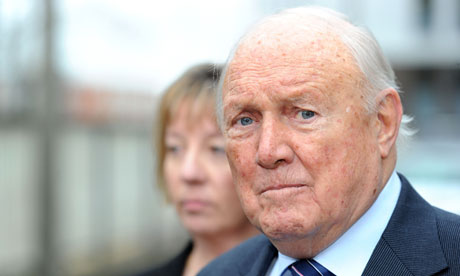 Broadcaster Stuart Hall has admitted 14 charges of indecently assaulting girls including one as young as nine.

The 83-year-old from Wilmslow, Cheshire pleaded guilty at Preston Crown Court to the offences, involving 13 victims, which occurred between 1967 and 1985.

A further three charges of indecent assault and one of rape have been left to lie on the court file.

Hall has been bailed until sentencing on 17 June. His lawyer said Hall wished to apologise to his victims.

Crispin Aylett QC added: "He is not a man easily moved to self pity but he is all too aware that his disgrace is complete."

Hall admitted the offences last month but they could not be revealed due to reporting restrictions.

He added: "We prosecuted Stuart Hall because the evidence of the victims clearly established a pattern of behaviour that was unlawful and for which no innocent explanation could be offered.

"His victims did not know each other and almost two decades separated the first and last assaults but almost all of the victims, including one who was only nine at the time of the assault, provided strikingly similar accounts.

"Whether in public or private, Hall would first approach under friendly pretences and then bide his time until the victim was isolated.

"I would like to thank the victims for having had the bravery to come forward. This case clearly shows that the victims of abuse will not be denied justice by the passage of time and abusers will be held to account."

Mr Afzal said the Crown Prosecution Service (CPS) would not be proceeding with the rape charge as the woman who made the allegation no longer wished to give evidence in light of the guilty pleas.

The court heard in the 1980s Hall molested a nine-year-old girl by putting his hand up her clothing.

He also kissed a 13-year-old girl on the lips after he said to her: "People need to show thanks in other ways."

Hall was initially arrested in December and made a statement labelling the claims "pernicious, callous, cruel and above all spurious".

He has been a familiar face and voice in British broadcasting for half a century, and was awarded an OBE in the 2012 New Year Honours.

The former It's A Knockout presenter was working as a football commentator on BBC Radio 5 Live and wrote a weekly sport column for the Radio Times magazine until his arrest.

The BBC said at the time that he would not work for the corporation until the matter was resolved.