George R.R. Martin gives up even the pretense of trying anymore.

Will publish a compilation of Tyrion quotes in The Wit and Wisdom of Tyrion Lannister, a book that literally no one asked for. 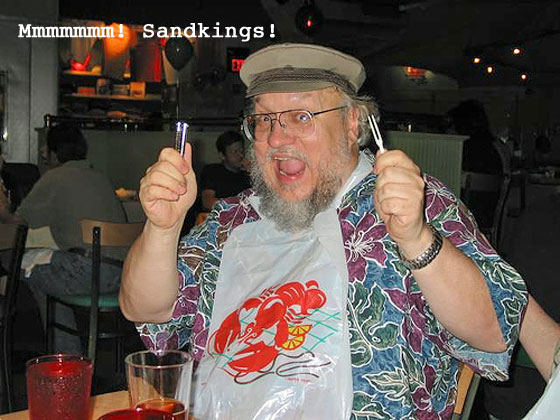 George R R Martin fans will have a new book for Christmas, with the fantasy writer compiling The Wit and Wisdom of Tyrion Lannister.

The book was announced at HarperCollins' showcase of autumn titles to retailers, held on Wednesday evening (1st May).

The hardback title will gather together "clever and naughty quips" from the popular character from A Song of Ice and Fire series, played in the HBO series by actor Peter Dinklage.

HarperCollins described it as "the perfect Christmas gift", quoting Tyrion: "My mind is my weapon. My brother has his sword, and I have my mind; and a mind needs books as a sword needs a whetstone if it is to keep its edge."

Fans are currently awaiting the next instalment in Martin's epic A Song of Ice and Fire series, which has so far stretched to five novels split into seven volumes. The books follow hundreds of characters and the struggle for control of the Seven Kingdoms of Westeros, and has been adapted into an award-winning TV series by HBO.

I fucking cannot. I am sitting here trying to can, but it's just not happening. I can't. I...just...you lazy fat fucking asshole.