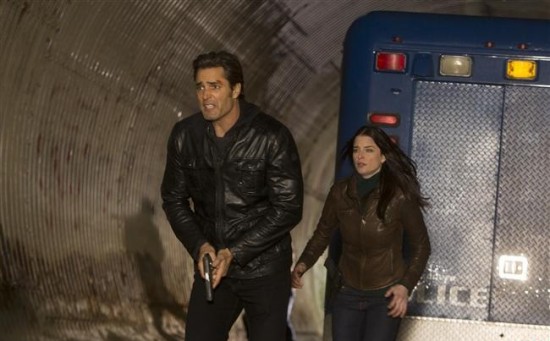 Last week’s second season premiere of "Continuum" proved that there’s still great sci-fi on our screens and this second episode, ‘Split Second’, shows no sign of letting up. There’s action that wouldn’t look out of place in one of this summer’s blockbusters and development of treasured characters in directions we didn’t think we’d see for seasons to come.

The second half of the episode contains a rip-roaring car chase between Keira and two factions of Liber8, as they all fight over who gets to keep Travis. Yep, there’s two factions of Liber8 now, making them doubly dangerous to the world and, apparently, Keira’s secret identity. The game was almost up when Travis started hinting at their shared time-traveling past in front of Carlos, and it can only be a matter of time before he puts two and two together. I can’t wait until he’s in on the secret, really making him and Keira a team to be reckoned with. That’s if the writers don’t kill him off first, of course. (...what is this person talking about. I can't see them killing off any of the main characters)

This week’s adventure was surprisingly light on recognizable faces from Liber8, but we do get an insight into their past. Apparently Sonya was the scientist who made Travis into a super-soldier and we witness their first illegal act. Told that all subjects of the experiment would be terminated, Sonya killed her superior instead of her boyfriend. I’m really glad that their altercation at the end of last season wasn’t what it seemed, since Travis has become one of the most intriguing characters on the show.

And speaking of intriguing characters, Alec reaches a crossroads when Kellogg offers him a deal. My guess is that he thinks any interaction he has with people from the future will change his own destiny but, if we’re going by the ‘whatever happened, happened’ rules of time travel, then he was always going to do what he does from this point on. We’ve come to know Kellogg as one of the good guys, no matter how fickle his allegiance to Keira is, so their new partnership could go either way. Their conversations about destiny vs. design are certainly interesting, but nothing on Continuum is that black and white.

What did you think of the episode? Do you want Carlos to find out Keira’s secret?