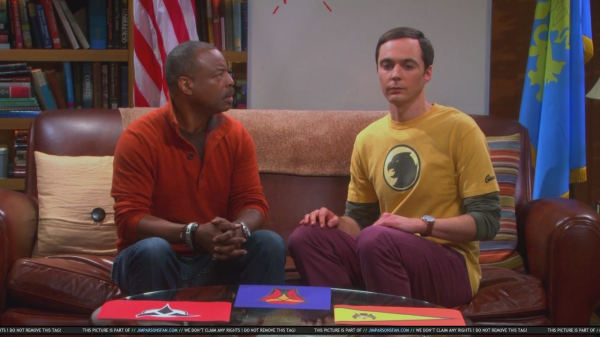 It’s been nearly 20 years since Star Trek: The Next Generation went off the air, but fan enthusiasm for the series shows no sign of slowing down — and the same could be said for some of its stars. With the third season of TNG debuting on Blu-ray (Apr. 30), we reached out to LeVar Burton, who played Geordi La Forge, the be-VISORed engineer of the USS Enterprise. It turns our the actor, who first achieved fame as Kunta Kinte in 1977′s Roots and is also well known for his children’s literacy franchise Reading Rainbow (which turns 30 this June), has kept busy. He spoke to TIME about meaning of Star Trek, how it influenced his love of technology, the future of Reading Rainbow—and whether we’ll all be using Holodecks in the near future.

What did you do to mark the 25th anniversary of The Next Generation, which was a few months ago?

This whole calendar year has been a celebration. We’ve had an opportunity to spend a lot of time together as a family, and that’s been rare these past several years.

Time flown in the decades since TNG went off the air…

Definitely. That seems impossible, but the numbers don’t lie.

What is it about Star Trek that makes it so enduring?

It’s the hopeful vision of the future. There’s a lot of post-apocalyptic vision out there and Star Trek is, and always will remain, that beacon that’s pointing the way. People really respond to that.

Here’s a technical question I’m sure you’ve been asked many times. How did the VISOR stick to your head?

We screwed it in. It’s a true story. One of these days I’m going to bring the VISOR to a convention and show what I mean when I say they screwed it into my head. It’s kind of hard to visualize, but believe me, it’s true.

In essence, it is like a vise that squeezes into the temple. And then there’s double-face tape on the nosepiece.

What could you actually see through them?

Not a whole lot. About 80% of my vision was impaired. Which is weird because I’m playing a guy who can see more than everybody else.

Speaking of vision, I saw that you entered the Google Glass competition on Twitter. Are you getting a pair?

I got a notification saying “stay tuned, you have been selected.” I’ll believe that when I see it.

Are there any other Star Trek technologies that you think we’ll start to see in real life?

The Holodeck is an idea that’s 25 years old. It was invented in Star Trek: The Next Generation and when it was invented it was, as far as we could imagine, a pretty good representation of what would be really cool and far-reaching technology that we would buy as being readily available in the 24th century. Well, we are within distance of the Holodeck in about 15 years. Maybe sooner. You never know. This globe spins really fast these days, you know? Gene [Roddenberry]’s vision continues to inspire life here on Earth in the right-now.

Did your involvement with Star Trek influence your own love of technology? You’re clearly an early adopter.

I think it is. Technology is a part of the LeVar Burton brand, which is a great thing for me, because I really do enjoy technology. Having played the chief engineer of the Starship Enterprise doesn’t hurt my cred.

I saw you were in the first White House Vine clip. How did that come about?

It was at the third White House Science Fair. They asked if I would be interested in helping the President promote his love of science and STEM and kid scholars. He wanted to treat these kids like he does NCAA sports championship teams. He brought them to the White House and he shines his light on them and their work. That’s  why I was there.

Another technological thing you have going on is the Reading Rainbow app. How did that come about?

When the opportunity came along a few years ago to actually have a say in what happens to Reading Rainbow—because I care very deeply about it and I always have—I jumped at it. That began a process whereby my business partner and I now have the worldwide and perpetual rights to the brand. The question we asked ourselves was, what do we want to do with it? Do we want to go back to TV? Television was the technology that we used in the ‘80s because that’s where kids were, and today’s kids are using television as only one of the many screens in their lives. Then the iPad came out. It was like, oh, now we know what we’re going to do.

(MORE: Did Star Trek: The Next Generation Inspire the iPad?)

What does the tablet allow you to do that you couldn’t do otherwise?

You can animate the books! For us at Reading Rainbow, that’s a tremendous opportunity and a huge responsibility. Because we’re Reading Rainbow, we have very special relationships with our writers and illustrators and publishing partners. Our commitment to them is to keep their art intact and really present their work the way we did on the television show—with love and respect. So we’re not going to put bells and whistles in the storytelling experience for kids just for the sake of them being able to push something.

What are your feelings on e-readers? Do you feel an attachment to books on paper?

No, my attachment is to reading. That’s where my attachments lie. I want kids to read and I don’t care what device it’s on. I love the physical book, always will, have an emotional attachment to it—and I carry a library around on my iPad. You can’t do that with a physical book.

Speaking of, you played yourself on Community recently, in a bit about how Troy is obsessed with Reading Rainbow. Does that happen to you in real life, that someone raised on Reading Rainbow freaks out when he sees you?

Versions of that—it’s funny because it’s just a little bit more extreme than a lot of people. We happen to live in a world where there’s a whole generation of people who are adults now who grew up on Reading Rainbow, so what I hear constantly is, “Dude, you were my childhood!”

Do people sing the theme song to you?

They do. I encourage it. I love the Reading Rainbow nation because it’s legion. And they’re running the world right now. The feeling that I get overwhelmingly every day of my life—and this is the honest truth—is that you guys feel like you know me, and you feel like you can trust me, and I feel like I have earned that trust and I respect that sense of knowingness that we share. It’s a good thing, you know?

Who are more extreme: fans of Reading Rainbow or fans of Star Trek?
Star Trek fans are very cool. Reading Rainbow fans, it’s very emotional for them because it’s their childhood.

Do you think Captain Planet, your other much-beloved kids’ program, will ever return the way Reading Rainbow did?

On Earth Day, I did retweet a Captain Planet tweet, and I remain enormously proud of Captain Planet and the Planeteers. I think it was ahead of its time and I’m happy that there’s still love out there for Captain Planet.

What do you think of the JJ Abrams Star Trek?

I’m very eager to see the next movie and to see what it is he wants to talk about. Star Trek’s always about something. What’s JJ trying to say? That’s what I’m very interested in discovering.