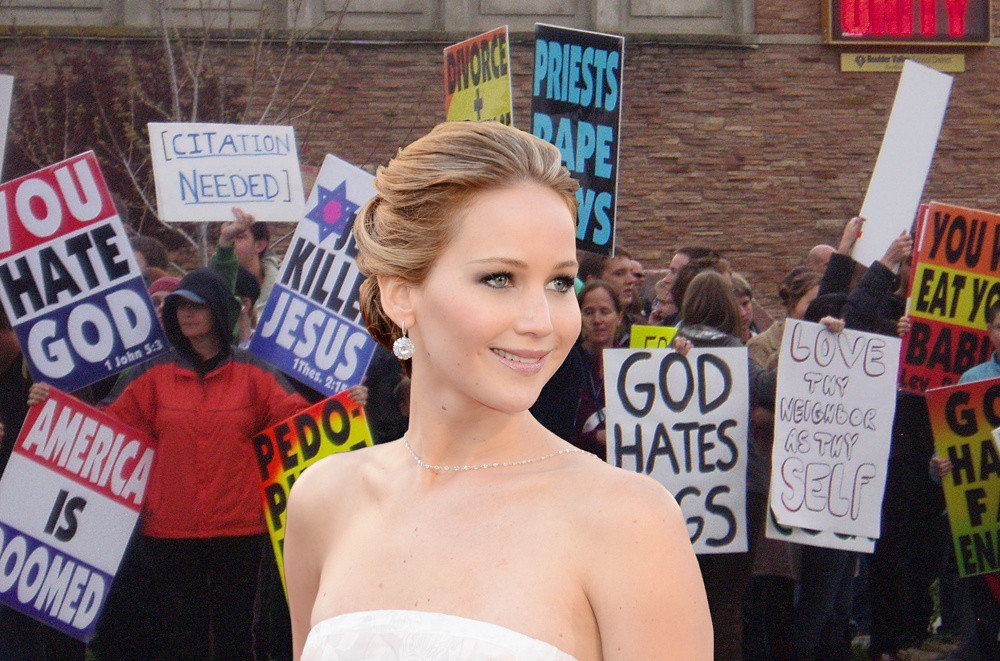 Have you ever met anyone who doesn't like Jennifer Lawrence? No? Me either. Even if someone doesn't know who she is, you can just show them that clip of her after the Oscars, or that one of her getting freaked out by Jack Nicholson, and they will become an instant lifelong megafan.
But in the interest of presenting a fair and balanced argument, I decided to try and find some people who hate her. And who hates more shit than members of hate groups? They have the word "hate" right there in their description.
I called up a few to see what their feelings were on J-Lawr.

You know who she is, right? She just won best actress for Silver Linings Playbook? She was inHunger Games?
No, sorry. I don't really pay attention to that nonsense.

Oh. Well what kind of stuff are you into?
Basically, you know, defending the rights of white people everywhere.

So you guys would defend her?
If something were to happen to her.

Well, a while ago she won an award at the Golden Globes, and when she went to get it, she said this thing about Meryl Streep, which was just a reference to First Wives Club, but a lot of people misunderstood and thought she was dissing Meryl. A bunch of people were angry. There was this huge Twitter backlash.
Uh-huh.

Is that something you guys would have defended her against?
No.

What kind of stuff would you defend her against, then?
A variety of different things. Say, for example, she was the victim of a flash mob.

Eugh. I hate flash mobs.
Yeah, basically where a group of nig-nogs are looking for any excuse to attack whites.

Oh. I think maybe your definition of "flash mob" is different from mine... Are there any actresses you do like?
Nope.

Not even Meryl Streep?
Nope.

Oh wait, is she Jewish or something?
I wouldn't be able to tell ya.

Those guys who show up whenever anything sad happens with signs about how much God hates good things/loves bad things.

VICE: What do you guys think of Jennifer Lawrence?
Steve Drain, Westboro Baptist Church: You talking about the Hunger Games woman?

Yeah, that's the one.
You want a statement on Jennifer Lawrence? From the Westboro Baptist Church?

Yes, please.
I don't know enough about her. You know, we focus on things that we see in front of us. I haven't really taken a look at Jennifer Lawrence from a religious perspective, or from a how-great-of-an-actress-she-is perspective. But I was taking a tour at NBC when I was in New York and she was practicing a skit for Saturday Night Live.That's about as much as I know about her.

Oh. So you got to see her in real life?
I think that's who they told me it was. I didn't even really know what she looked like until I started seeing trailers for Silver Linings Playbook.

You didn't see Silver Linings Playbook yet?
I didn't see it yet, I'd like to see it! I've been kinda busy picketing. I saw some of the movies nominated for best picture though. What was the one with Ben Affleck?

Argo.
Yeah. That was a good flick. I feel good for Ben Affleck, because he was kinda on the out, you know what I mean?

Yeah. So you guys are into Ben Affleck?
No, man. You're looking for some kind of a salacious quote to put in your story. All I'm saying is that I thought Argo was a darn good flick.

OK. But what about Jennifer Lawrence?
OK. Jennifer Lawrence... I think that most of the young people in our church saw Hunger Games. And I think they all liked that... She just kinda bursted onto the scene, didn't she? She doesn't have a very long film career, does she?

She got nominated for some awards a couple of years ago for Winter's Bone.
Oh! That's her? Winter's Bone rocked! That was a great flick.

Yeah.
I like Winter's Bone quite a bit. I think she did a very nice job there. Yep.

An organization that calls itself a "public-interest educational, research, and publishing center dedicated to promoting greater public awareness of history." Which is a fancy way of saying "holocaust deniers."

VICE: Hey, would you be able to tell me what you guys think of Jennifer Lawrence?
Institute for Historical Review: Who?

You know, she just won the Oscar for best actress?
Oh... Well, I don't have any comment. I don't really know anything about her. Why would you be interested in what I might think about her?

I'm just curious. Do you know who I'm talking about?
She's an actress. I don't really know much about her. And I don't really have any opinion on her one way or another.

Let me tell you something about her: she was friends with this kid who had down syndrome before she was famous, and now that she's a big star, she's still friends with him. She like, sends him signed posters and calls him and stuff.
Oh, OK.

So what do you think about that?
Well, that's fine, I guess. I just don't have any opinion about her.

But what about the thing I just told you? That makes her pretty likeable, right? She's very likeable.
Fine. OK. Look, I'm just astonished that you would ask me what I think about her. I just don't have any opinion.

A "religion" based largely around anti-semitism, homophobia, and black-supremacy.

VICE: Hi there, I just wondered if you could tell me what you think of Jennifer Lawrence?
Nation of Islam: I'm sorry, sir, we can't participate in such things. [hangs up]

[second call] Hey there, sorry, I think I got cut off a second ago.
OK.

So, what were you saying? What do you think about Jennifer Lawrence?
Sir, AGAIN, no, sir, we don't participate in surveys here.

Well, it's not really a survey, it's just—
[shouting] SIR! NO! WE ABSOLUTELY CANNOT PARTICIPATE. [hangs up]

LEAGUE OF THE SOUTH

A group that advocates for the secession of the South, and a society "dominated by European Americans." Which, I think, is a fancy way of saying "slavery."

VICE: Hey, just wondering if you could tell me what you think of Jennifer Lawrence?
David Jones, League of the South: I don't know who that is.

She was in the Hunger Games?
What's the question?

I just wanted to know what you thought of her.
It doesn't matter what I think of Jennifer Lawrence one way or the other. That's not what the League of the South is about.

OK, sure. But like, League of the South aside, you must have a personal opinion on her?
No, I don't.

Did you see Silver Linings Playbook?
I think, sir, that you are so out of whack with what the League of the South is about that it really doesn't behoove me to talk to you at all. We're about poliitcs, we're about government, we're about personal responsibility, and my opinion about one person's acting ability is irrelevant.

So you didn't see Silver Linings Playbook?
No sir. I don't care about anything like that. What's your name?

Jamie Taete.
And where do you live?

Los Angeles.
Oh hell, then I have no desire to talk to you. Thank you very much. [hangs up]

Extremist Christian cult that hates all of the usual Christian extremist stuff (like gays and stuff). But also has the honor of being founded and run by Tony Alamo, a man who just got sent to prison for 175 years for physically and sexually abusing children and forcing them into polygamous marriages.

VICE: Hey there. I was just wondering if you could tell me your opinions on Jennifer Lawrence?
Tony Alamo Christian Ministries: I have no idea who that is.

You know who Jennifer Lawrence is! She just won the best actress Oscar? She was the one who tripped on the stairs when she was going to get her award and it was adorable?
This is Tony Alamo Christian Ministries. This is a church.

You didn't see the Oscars this year?
Did you call us because you have nothing better to do? Let me just say real quick, the Lord's coming back. Very soon. And he's not gonna ask you how many movies you saw or which celebrities you knew, he's gonna ask you what you did for his son, Jesus. He died on the cross, and he did that just for you, and that's what we preach.

Wait, are you doing that thing where people pretend they don't know what someone or something is to seem cool? Like, my friend is really cerebral and is into a bunch of obscure old music, and one time he claimed he didn't know who the Spice Girls are. Which, obviously, is bullshit.
Did you hear anything that I just said?

Well, I'm not saying that Jennifer Lawrence is like, the most important thing. I was just curious as to what you thought about her. She's kind of a big deal right now.
God is a big deal to me right now. But I hope she's right with God and I hope she gets saved.