Since its debut less than two weeks ago, Netflix’s House of Cards has made quite the splash. In fact, it’s currently the most-watched program.

Netflix Chief Content Officer Ted Sarandos touted the accomplishment at a media conference, according to All Things D, but declined to elaborate on specific numbers and metrics, saying he is doing so to avoid comparisons to traditional broadcast shows.
Even without numbers, however, the fact that Cards is besting the streaming site’s thousands of current TV offerings is impressive, and a good sign, considering they’ve already committed to a second season of the Kevin Spacey-helmed drama.

Kate Mara signs autographs outside of her taping of Jimmy Kimmel Live! on Tuesday (February 5) in Los Angeles.
The 29-year-old actress went on the show to promote her new Netflix series House of Cards!
“I know I’m really greedy…I usually wait for an entire season to be done so I can spend an entire weekend [watching]…and so I think Netflix was really smart about that and thought lets beat people to the punch,” Kate said about Netflix releasing all the episodes at once.
FYI: Kate is carrying a Dolce & Gabbana handbag. 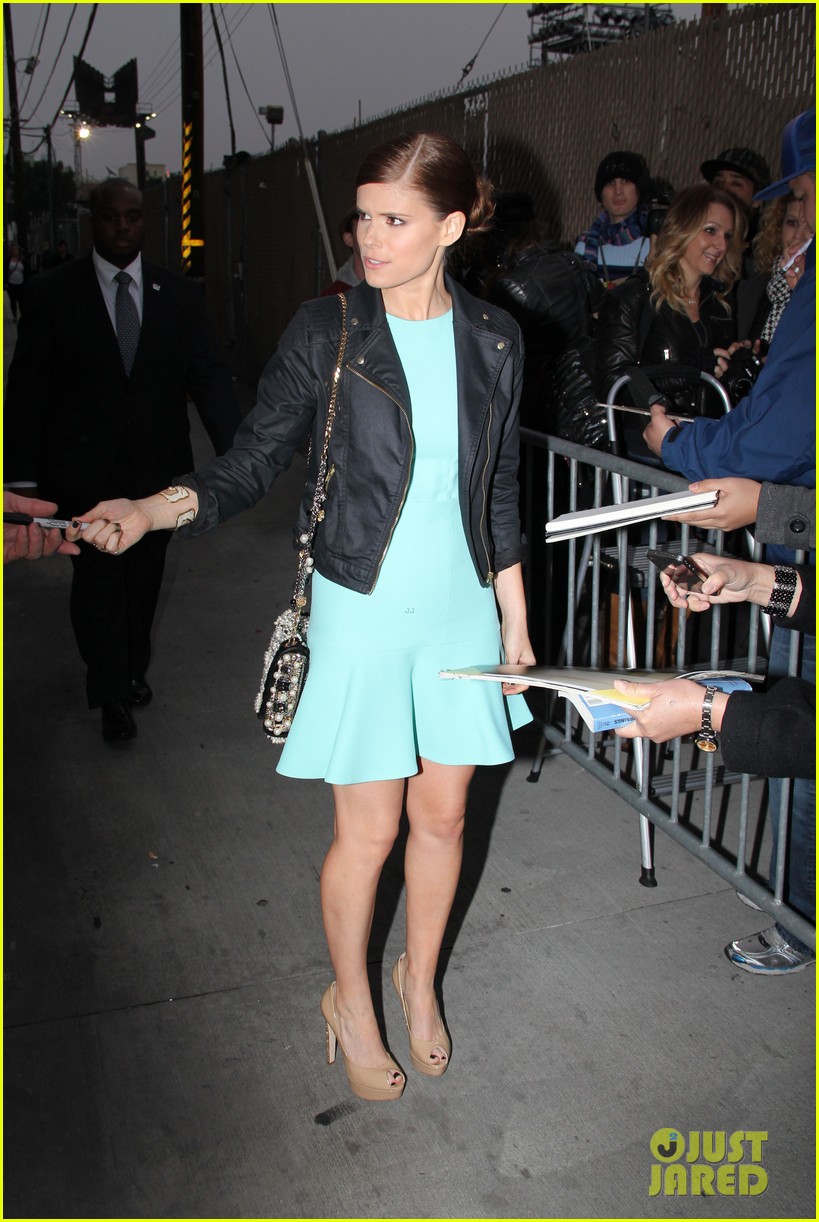 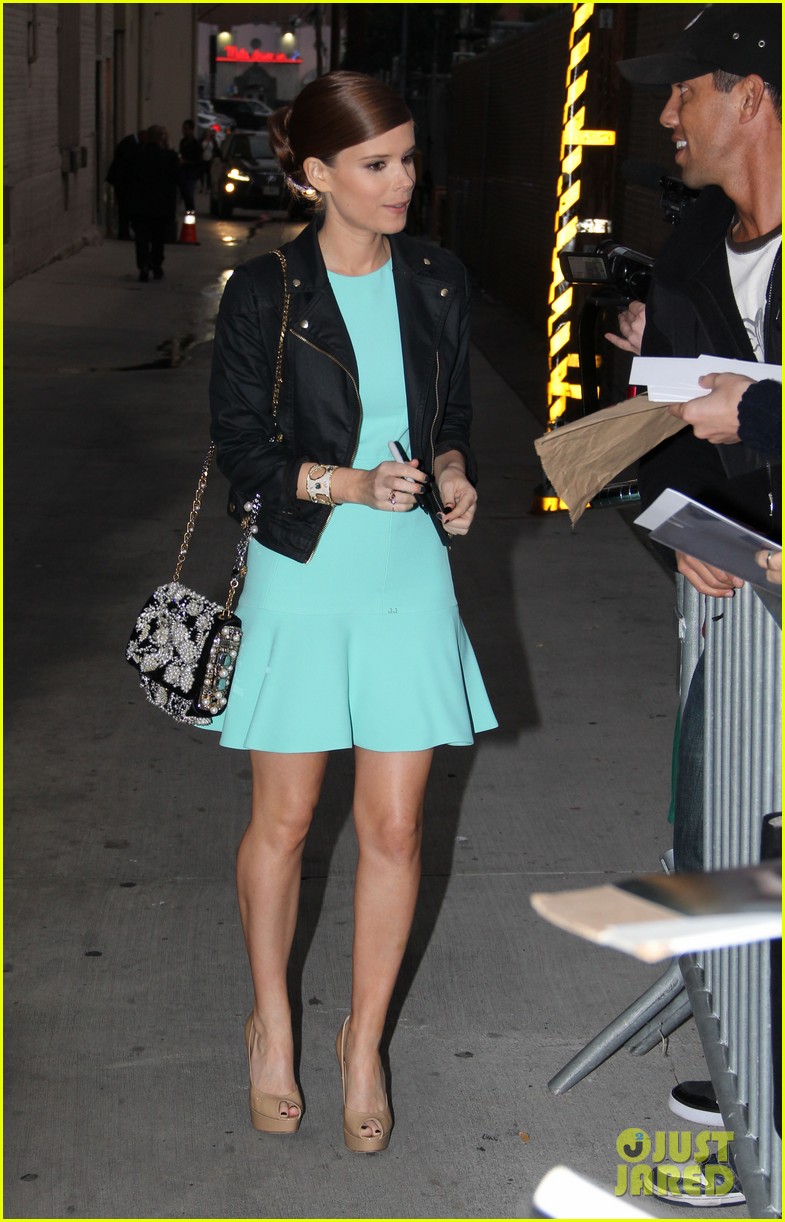 Corey Stoll on His New Role in House of Cards 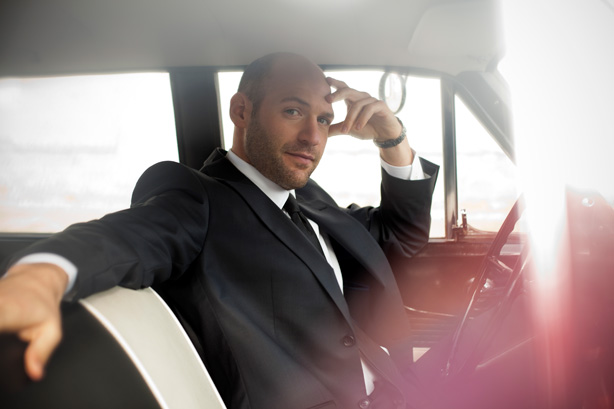 Stoll plays a third-term congressman with a weakness for whiskey, cocaine, and call girls. "He has the natural appetite of Clinton. But he doesn't have the pain threshold. He's more like Spitzer and Weiner."

"No," Corey Stoll says when asked if he could take Ernest Hemingway in the ring. "I've got the reach on him. I'm a few inches taller. But he actually boxed. Plus, I can handle losing a lot easier than he can."
A third-generation New Yorker who attended the performing-arts LaGuardia High School — inspiration for the '80s film Fame — and NYU's Graduate Acting Program, Stoll, 36, hasn't suffered too many knockdowns in his career. "Looking back, I was very naive about how it was going to be. In some ways my naïveté was an asset. I should've been more worried. I should've had less confidence. Because regardless of how good you are, the odds are against you." He's done Broadway with Scarlett Johansson and Off Broadway with Viola Davis; shared the big screen with Angelina Jolie, Charlize Theron, and Jeremy Renner; and appeared alongside Alfred Molina and Terrence Howard in NBC's fleeting Law & Order: Los Angeles. But he's by far best known for his turn as Hemingway in Woody Allen's 2011 blockbuster comedy Midnight in Paris.
The role earned him an Independent Spirit Award nomination and had some thinking he'd be an Oscar contender. (His most memorable line in the film — "Who wants to fight?" — was improvised.) But because he wore a wig — and in real life shaves his head — Stoll is rarely recognized. "Right now, it's perfect," he says. "I can walk down the street and nobody knows who I am."
That could easily change now that Netflix has just premiered its first original series House of Cards, out today. The show is remarkable both for its unique distribution — all thirteen episodes of the first season are available at once — and marquee talent. Executive produced by David Fincher (who also directed the first two episodes) and written by Academy Award-nominated screenwriter Beau Willimon, it stars Kevin Spacey as a politician out for revenge after being passed over for a cabinet post, with Robin Wright as his Lady Macbeth.
Stoll plays third-term Philadelphia congressman Peter Russo, a key pawn in the scheme. "He has the natural appetite of Clinton," Stoll says of his character, who has a weakness for whiskey, cocaine, and call girls. "But he doesn't have the pain threshold. He's more like Spitzer and Weiner. Our political consultant, Jay Carson [press secretary for the presidential bids of Howard Dean and Hillary Clinton], said scandals are like having a trashcan over your head and somebody banging on it. It's unpleasant, but it will pass. Clinton knows he'll live to see another day. Weiner and Spitzer say, 'uncle.'"
If the premise of House of Cards sounds reminiscent of another Beltway series, think a different angle. "It's the anti-West Wing," Stoll says. "There's a lot about bills and stuff, but that's sort of peripheral. It's not about ideology. It's about power."
Stoll is getting a little more power of his own in Hollywood. In addition to House of Cards — set to film its second season soon — he can be seen in the recent Sundance entry C.O.G. and the Liam Neeson action-thriller Non-Stop, out later this year. He also just landed his first lead role — as, of all things, a washed-up boxer in the indie Glass Chin, currently in production and co-starring Billy Crudup and Kelly Lynch.
But Stoll isn't taking anything for granted.
"I don't feel secure at all. I don't know what actor would feel they've made it. I feel like I'm just starting."

Kate Mara in Nylon Guys
Click on the pic of the article to read in full size! 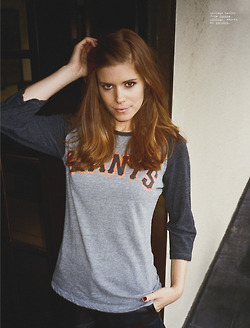 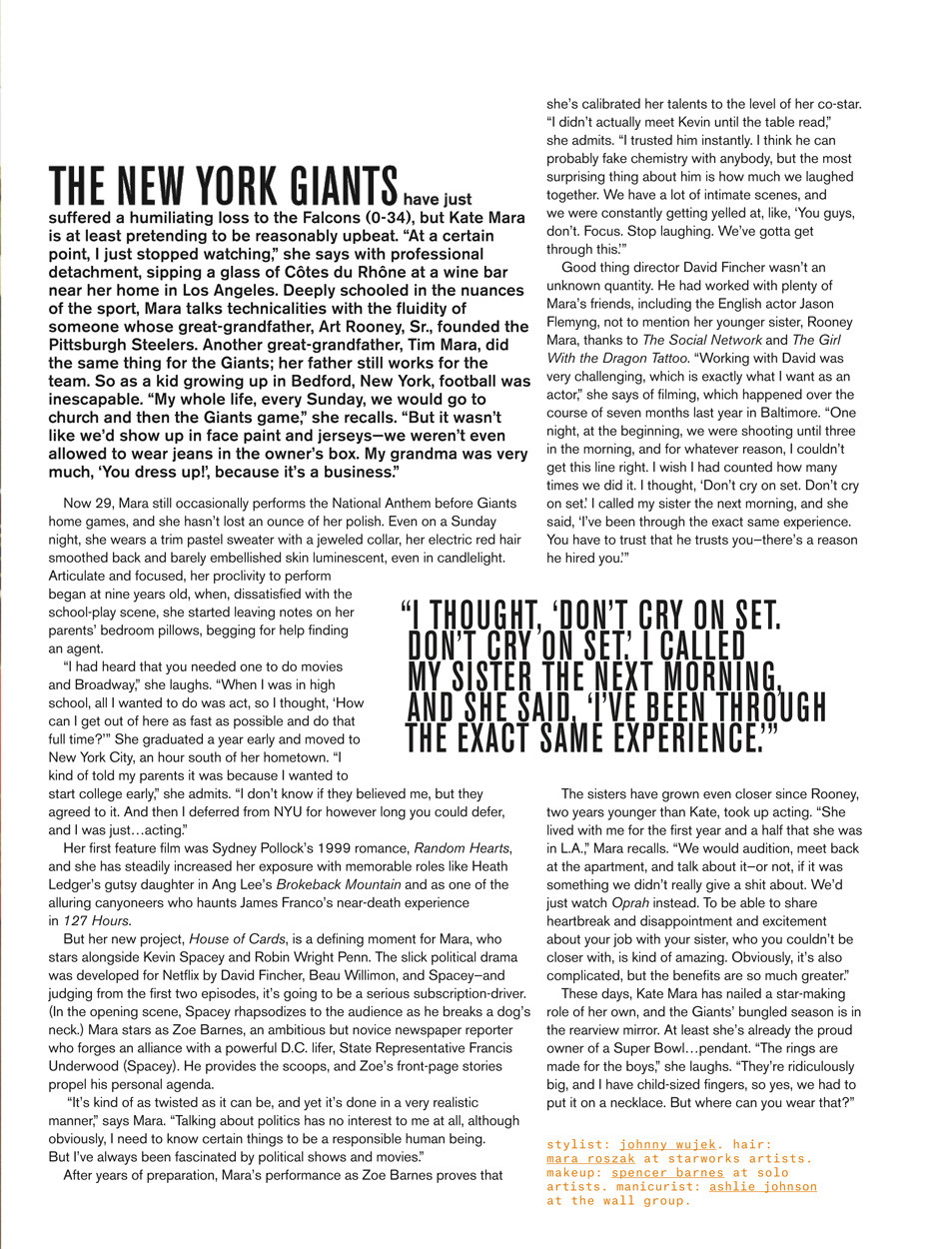 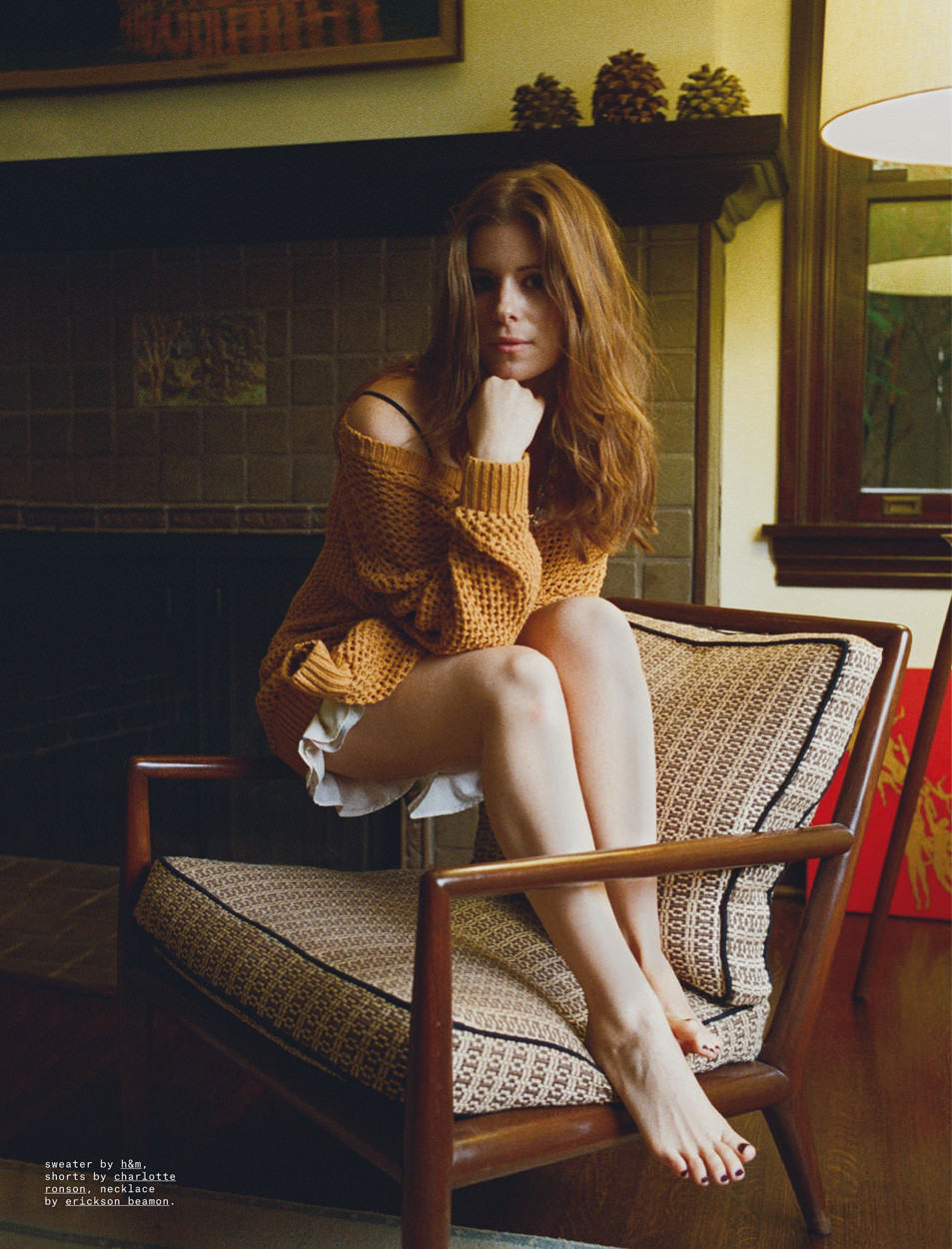 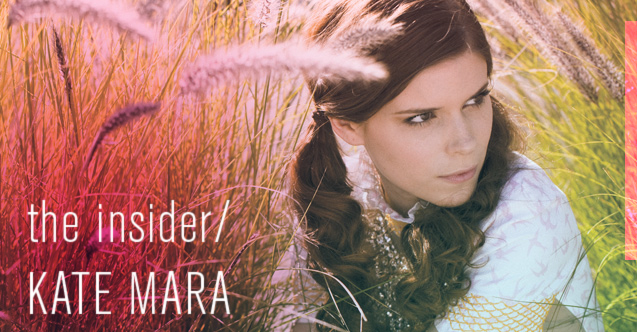 Spending a weekend watching an entire TV series worth of episodes is nothing new--but having a series premiere online, all at once certainly is. That's the approach Netflix is taking with its very first original series, House of Cards, with all 13 episodes of the first season (there will be two--and two only) available on-demand starting today--and they couldn't have chosen a better show to do it with. It follows a charismatic congressman (played perfectly by Kevin Spacey), his tough-as-nails wife (Robin Wright), and their smile-to-your-face-but-stab-you-in-the-back antics in Washington, D.C
With such big-name stars--not to mention director David Fincher--it's hard to imagine an up-and-coming actress stealing the spotlight—and yet if you ask us, this show is all Kate Mara. The actress plays Zoe Barnes, a reporter looking to write about more than just city council meetings--and is willing to do just about anything in the process to make it happen. Played by someone else, it could make her instantly detestable, but the brunette nails it. NYLONmag.com sat down with Mara to talk TV marathons, David Fincher phone calls, and never getting confused with her sister Rooney.
REBECCA WILLA DAVIS
House of Cards is the first of its kind--in that it's a series produced by Netflix, with the entire season available for streaming from day one. Does that mean I'm not going to leave my house all weekend because I can't stop watching?
Yeah, well, that's the hope anyway. For me, obviously I'm in it and it can be hard to watch yourself in things, but I was so addicted to watching the series because it's so well-written and there are so many great actors in it. Hopefully people will have that reaction and just pull an all-nighter!
Did you have a feeling it was going to be that addictive when you read the script?
Yeah, I mean one of the reasons why it was so great to work on was because it's not a TV series, it's not a movie, it's its own brand; we don't really know what to call it! Unlike TV, I knew exactly what I was going to be doing in episode 10, before we started shooting episode one, which is so rare. So it really felt like we just shot six movies in a row, which was amazing.
How much prep work did it take to play Zoe Barnes?
We had a few weeks before we started shooting in Baltimore, rehearsing a lot with David Fincher and Beau [Willimon], our writer, and the whole cast. And you don't always get that opportunity, so it was a lot of time spent talking about this world that we were creating and where our characters were going. I didn't spend time with any reporters or anything like that because it wasn't necessary for my character; just being able to call up Beau or Fincher at any time and saying, "What's going to happen at the end in order to know how to play the beginning?" was all I needed.
Do you have to be a political junkie to get into the show?
I think it doesn't really matter if you're interested in it or not, because before I was a part of [the show] I read [the script] and literally couldn't put it down, and I'm not interested in the political aspects of things. I was super, super addicted to just reading the script, so it's great-- I think if you're into politics it will be a great, dark world to explore and watch. And if you're not, it doesn't matter because it's mainly about the politics at home and in your relationships --not just with husbands and wives; it's the politics of people as well.
So it was the script that hooked you?
To be completely honest, as soon as I heard that Fincher, Kevin Spacey, Robin Wright, and Beau were making this I thought, Of course I want to do this if I can. And then the scripts just happened to be something that I personally loved and felt really connected to this character, so that was just lucky.
What other TV shows do you love?
I'm obsessed with Girls, I love The Mindy Kaling Project--I thinks it's hilarious. I just watched Homeland; I was late for that, but I waited for all of them and I spent a weekend watching them. I thought that was really good.
We posted a photo of you and Rooney posing on the red carpet together the other day and all of these people commented saying they had no idea you two are sisters. Do you get that a lot?
It's so funny the amount of people that say that--I guess because we don't really look alike. When you see us next to each other you can see the similarities, but we're so different, and I'm not sure why people don't know, but it's nice to be able to, ironically enough. I'm dying to see her movie [Side Effects], and my whole family is here so that will be nice
Do you talk shop with each other?
Yeah, totally. Absolutely. And we share stories! It's such a unique thing to have your sister doing the same exact same thing that you're doing, and I feel really lucky. People are always asking, "Are you guys competitive?" and all that, and I understand why people ask that, but there are so many benefits of us both being actresses. Just emotionally to have somebody who truly understands the day-to-day and the ups and the downs of it all.
And because you each have your own identities, it seems like there hasn't been that case of Mary-Kate and Ashley where you need to distinguish yourselves from each other
Yeah, we're very different and yet we clearly we have very similar passions.

Netflix, 'House of Cards,' and the Golden Age of Television

A flirty Zoe Barnes invites you into this post.