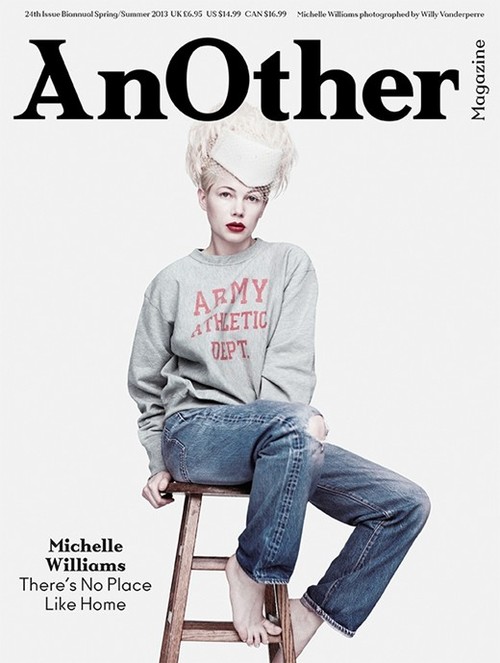 Michelle covers AnOther Magazine Spring/Summer 2013,An exclusive film with Michelle will premiere on anothermag.com this Wednesday, this issue is out on February 14.

This spring, Michelle Williams, star of Oz the Great and Powerful, features on the cover of AnOther Magazine and transforms into eight imaginary characters, shot by Willy Vanderperre with styling from Olivier Rizzo.

Inspired by the issue’s theme of There’s No Place Like Home, Williams gives a revealing and candid interview to Nancy Waters in New York, leading us on a journey through her unusual past homes, from childhood onwards. Since her youthful stint in Dawson’s Creek, three-times Oscar-nominated Williams has illuminated the best of independent cinema with leading roles in My Week With Marilyn, Blue Valentine and Brokeback Mountain, securing her position as one of her generation’s most sensitive and subtle actresses. And this March she shines as never before, as Glinda the Good Witch in Sam Raimi’s all-star prequel to the classic film The Wizard of Oz.
( second cover, video and new picture insideCollapse )