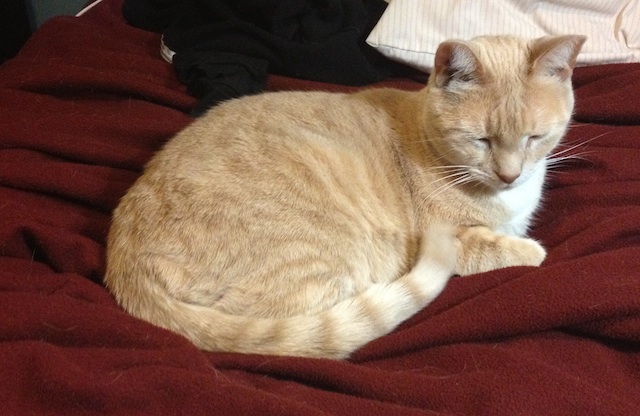 I’ve fallen down an internet k-hole these past few days that I’m not sure I’ll ever crawl out of. My topic of interest? People who think they are real animals or imaginary beings trapped in human bodies. They call themselves “otherkin.” Or more specifically in the case of people who think they are animals, “transspecies.” Because a nice girl and a mean lady are fighting in me always, I find it equal parts sad and hilarious.

Like legitimately marginalized communities, they like to hang out on the internet, especially Tumblr. Here is a fairly thorough explanation of the “possible” causes of the otherkin identity. Here is an excerpt from the “about me” page of a popular otherkin Tumblr called “Transcats“:

I was born a cis female human to a family of humans living in America. Growing up, I always had a close connection to cats. I could identify with them in ways that I couldn’t with anybody else. Even as a small child, I believed with all my heart that I was no different than my house cat. Being with cats, I felt more at home than I ever have with a human. There existed an unspoken understanding between us that reassured me that I was not alone.

From the time I could crawl, I have always carried instinctual urges towards cat behavior. Perhaps it was during those years that I felt most aligned with my spirit, before my legs began to betray me and force me upright. At first, standing up felt extremely unnatural and I still don’t think I have ever fully adapted to being so far above ground. However, being raised by human parents, I was made to believe I was a human too, regardless of how I felt inside.

So I grew up as a human and tried my hardest to keep my cat urges under control. I figured I just really liked cats and for the most part lived a functional life.

It wasn’t until I was 18 years old that I met my spirit sister and discovered my otherkin.

When I was 18, I was walking around my neighborhood one day when I crossed paths with a cat. Normally this wouldn’t be an unusual event, but this time it was different. We just stopped and stared at each other. I knew this cat. I knew everything about her. I was her.

Their explanation for their animal nature varies; some, like this one, believe they somehow switched bodies with an animal at birth, while others believe their animal nature comes from having been an animal in a previous life. Others, like the dragon people, believe their wings and such exist in a different dimension, as there are no dragons around on this plane for them to have switched with. Nearly all of them subscribe to a New Age pastiche of spiritual beliefs, adapted, of course, for the special needs of a new generation of internet dufuses.

Because this person is a cat, she needs to sleep a million hours a day in between being fed and watered by her parents:

My parents allow me to live at home and they take care of me. Since I’m a cat, it’s very hard for me to hold a normal job or go to school, so they accommodate my needs. They’re not very accepting of my spirit sister though – so we get into fights a lot when she comes home with me. I just told her to come up to my bedroom window from now on.

This poses some problems, though, as she is over the age of 18, and as such, her parents kind of hoped she’d be moving towards independence by now. Much of the blog focuses on the conflicts that this causes, and the utter injustice of a transspecies individual being forced to live in a human world.

Reading this blog inspires many feelings in me. On the one hand, I feel bad for this girl, because I’m fairly certain she has a mental disorder that requires treatment she is not getting. On the other, it’s hard not to laugh at passages like this one, wherein her family forces her to take a shower:

I scrambled to run out of my room and as soon as I reached the hallway, my dad and my sister grabbed me and pushed me into the bathroom and held the door shut.

I have never been so upset and confused in my whole life. I wailed and banged on the door and just asked them WHY over and over.

Then I heard my mom talking through the door. She said that no one was going anywhere until I took a shower and that I would be trapped until I pass her inspection.

I hate being told what to do and I was already really angry from being scared half to death, so I curled up on the floor and howled, refusing to give them what they wanted.

After five minutes, I tried to open the door again but they were still there. I pleaded with my dad, but he kept saying to just shutup and take the damn shower.

I realized I had lost this battle. So I anxiously turned on the shower and made myself go inside. I washed my hair and combed it. I put their awful smelling human soap all over me. I did everything my mother demanded of me.

When I was done, my mom handed me new clean clothes through the door. They won. My parents broke me today.

Do you hear that? THEY BROKE HER.

Here’s the thing about cats, and I say this as someone who likes cats: they’re assholes. They are selfish, lazy, amoral creatures who would almost definitely eat us if they could figure out how to grow to human size. A cat would never put someone else’s needs before their own. Why would anyone want to be like that? A few more posts in, I’m starting to feel like a fucking republican. “Get a job, cat!” I am thinking. “You are not oppressed. You are insane.”

And maybe that’s the real issue I have with this: cockamamie spiritual beliefs are your right,  until they interfere with the rights of others. Like the rights of your parents to not have to take care of a perfectly able-bodied and articulate child until they die. If this is a disorder, it’s not her fault. But if it’s a constitutionally protected religious belief, as some people would like to frame it…it doesn’t pass the the test. Not in my book. Maybe it’s not as bad as, say, human sacrifice, but it’s still not okay.

It also reads like a parody of identity politics; I wouldn’t be surprised if Transcats turned out to be a conservative troll bent on discrediting actual social justice movements. “Transspecies” sounds a little too much like “transgender” for my liking, and she often talks of “human privilege” in the language of the movement: “Whether you like it or not, if you were born in a human body in alignment with a human mind, you have privilege.” If someone can say they are a man trapped in a woman’s body, why not a cat, or a dragon?! Well, because gender is a fluid and socially constructed concept that leaves much room for interpretation. Species, not so much. Let’s not compare apples to oranges.

This isn’t new; here is a Village Voice article from 2001 on the subject, and here is a New York Observer story on someone who did, in fact, turn out to be trolling. I think I’ll leave you with this quote from said troll and a few links; descend down the (trans)rabbit hole if you dare.

Consider the following. You have created a community in which someone can claim to be an autistic pangender asexual demiromantic trans-Asian cat otherkin and not be immediately denounced as a troll. Whether you think these identities are valid or not, you find it plausible that someone would believe they are a Korean cat with autism and appropriate social justice terminology to defend that belief. What does that say about the state of your community? (And that’s not even starting on the people who actually supported us).

I find it so utterly absurd that a movement whose original purpose was to defend the rights of POC, trans* individuals, and other oppressed groups has been co-opted by people who believe they are dragons or that they have Homestuck characters living inside their head. It’s hilarious to me. It’s also incredibly offensive. I think what happened is that the SJ movement’s message of acceptance was somehow generalized to mean that if you don’t accept everything,you are a bigot —and the outcasts of the internet, the furries, the soulbonders, latched onto that, because they had finally found a place where no one could make fun of them. A “safe space”, if you will.

But it’s completely stupid (tw: ableism) and it trivializes the struggles of people who actually suffer from oppression (people laughing at you on the internet is not oppression).

Otherkin.net (this is the messageboard I got my title from)

WARNING: you may waste many hours of your life bummer-reading about this.