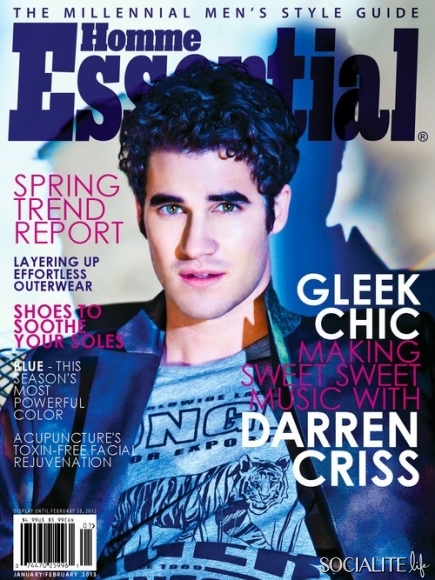 Darren Criss arrives at the Greenwich Village studio where he’ll be photographed for his Essential Homme cover story in thick black Buddy Holly glasses, a t-shirt and salmon colored jeans, his naturally curly hair a bit of a mop. It’s been two and a half weeks since Hurricane Sandy and this particular studio, an enormous, airily modern white walled loft a block from the Hudson River, still doesn’t have heat or hot water. It’s freezing. Criss’s L.A.-based publicist has his down parka zipped up all the way to his chin, and during the shoot, several of the stylists resort to warming themselves with a blow dryer from hair and makeup. You have to feel bad for Criss, changing in and out of clothes while the rest of us are bundled up, borrowing scarves from the racks and racks of clothes pulled for the shoot. But he never complains. Not once.

Instead, he chats about 80s horror movies—how weirdly over sexualized they are; that insane demon child from Sleep Away Camp—and Frank Ocean, and Brooklyn rapper Leif between shots. At one point he looks over at me as his stylist and an assistant are fussing over the clothes he’s wearing for one of the photos. “So, man, what’s your story?”

I remind him that I’m actually there to ge his tory.

He’s surprisingly unguarded, You’d expect one of the stars of one of the most popular and culturally significant television shows of the past 10 years to be more wary of journalists. But after the shoot—as he’s dashing off first to his Tribeca hotel and then to a friend’s jazz cabaret act—he gives me his personal mobile number so that we can arrange to have coffee and chat the next day. When our early afternoon coffee date downtown turns into an early evening, pre-theater chat near Lincoln Center, he calls me himself to make sure I can still make it. Most people in his position would have had their rep do that sort of thing, or at the very least had their number blocked. But Criss doesn’t seem to think twice about giving his number to someone he’s only just met.

Maybe that’s due to the newness of his fame. Maybe the precise nature of fame, its ugly intrusive side, the pitfalls of celebrity, haven’t sunk in yet. Maybe he’s lucky enough to look at the sea of adoring faces that show up at promotional events and not yet see potential stalkers. May be he doesn’t have to worry yet about photographers showing up at his hotel, or at the club where he’s seeing his friend’s show. He’s wary, instead, of seeming too “Hollywood,” making a point of the fact that he hates referring to his stylist as “my stylist” or to his manager as “my manager.” He’s self-conscious about lapsing into actor-speak, apologizing when he talks about Kristen Wiig, his costar in the upcoming film Imogene, as being “open and available in the moment.”

It’s only been two years, after all, since he waltzed onto Fox’s hit musical series Glee, making his debut as openly gay prep school crooner Blaine Anderson to the tune of Katy Perry’s “Teenage Dream.” It was a breakout moment for Criss, his performance instantly captivating the legions of “Gleeks.” (Perry even tweeted that his version of “Teenage Dream” brought a tear to her eye.) But for his part, the 25-year-old actor says he couldn’t have known that the scene he was filming would have such a profound impact on his career. “I don’t think you can ever have any sense when that happens, ever, in life. As an actor one wants to hope for everything and expect nothing. So you get a part: Cool, I have a job. You have a character, you don’t know how long he’s gonna be around, you do your best. You just—It’s my first day on set. Hope I make a good impression. What was that guy’s name again? Ok, be nice to that guy. Where do I go? Try not to piss anybody off!—That’s what was in my head!”

Since then, he’s become a series regular on the show. He’s appeared on magazine covers, toured with Glee’s live show, sung “The Rainbow Connection” with Kermit the Frog, and made his Broadway debut last year replacing Daniel Radcliffe in the revival of How to Succeed in Business Without Really Trying. This year, he’ll make his feature film debut opposite Kristen Wiig, Annette Bening, and Matt Dillon in Imogene. Still, in a very real way, Darren Criss’s fame is only just in its infancy.

Criss is waiting for me outside Shun Lee, the dim sum restaurant near Lincoln Center where he’s just finished dinner. He greets me with a big hug and takes me inside where his brother, multi-instrumentalist Chuck Criss of Queens-based indie band Freelance Whales, is just leaving. “Don’t be afraid to ask him the tough questions!” he says on his way out.

Criss apologizes again for changing our meeting time. He’d overslept this morning and was seeing his friend Amber Riley, who played Mercedes Jones on Glee, in The Cotton Club this afternoon. Later tonight he’ll be seeing frequent Glee guest star Cheyenne Jackson in the closing night of The Performers. “I’m such a Broadway show fiend. I try to see everything that I can,” he says. “Usually if I come to New York and I have the time I will be that guy who’ll see a show on Friday, two on Saturday, two on Sunday.”

Currently he’s in the city filming scenes for Glee’s Christmas episode opposite co-star Chris Colfer. I admit that I’m kind of a sucker for a Christmas. “So am I!” Criss exclaims. “Especially a New York City Christmas! For the rest of the world it’s such an image of romantic comedy. The lights, Rockefeller Center, everything being so magical.”

Of course, the amount of time Criss spends in New York in the coming months will depend largely on his character’s trajectory. Glee creator Ryan Murphy is notorious for his insistence that his character age out of their high school glee club when the time comes, leaving the fate of the fictional McKinley High uncertain. “You never know,” Criss says of Blaine’s future. “TV shows aren’t like movies where you have a defined sort of beginning middle and end. Things can always change. He’s gonna graduate, and who knows what’s gonna happen after that. The kids who graduated last year, they didn’t know. But hopefully they’ll have me around. That’s all I can say! I’ll be a janitor or something.”

The conversation turns to music and the huge role it’s played in Criss’s career. Before Glee, he made a modest living playing guitar in bars, on street corners, and in his own YouTube videos. “That would get people interested in other music that I’d do. It was like a trick,” he says of the cover songs he’d play. “If I saw some frat boys walking by I’d play Journey. You can trick people into being interested in you if you put your self into somebody else’s thing.” He pauses, trying to think of one of his own favorite cover songs. For a moment he’s stumped, trying to think of the singer’s name, and he does his best gravely, slurring “The Piano Has Been Drinking” type voice until I realize he means Tom Waits. “Tom Waits! Thank you! Tom Waits does a really great cover of ‘There’s a Place For Us’ fro West Side Story, which is so haunting and beautiful! It’s awesome. It’ awesome! Something like that where you can put so much of yourself in to someone else’s words.”

It’s not unlike what Criss does on Glee. Part of the show’s appeal is that it is, as he puts it, the ultimate jukebox musical, re-contextualizing some of the most iconic songs of the past 50 years alongside contemporary hits within its characters’ story arcs. “Music and story are the very foundation on which the entertainment industry is built,” says Criss. “If you put the two together, it’s always going to have more effect than just listening to a song on the radio.”

Criss glances at his phone to check the time. He has to catch a cab down to 48th Street. As we walk toward Lincoln Center, he talks about all the things he wants to do next: record an album, bringing a musical he wrote years ago to Broadway, writing songs for other artists. “At any give time, my brain is juggling nine different chainsaws.” But with his filming schedule, there just never seems to be enough time. “Glee keeps me very busy and I’m happy for it to keep me busy! Any time I can’t do stuff because of Glee, I’m like, that’s OK! There’s no better reason I would rather have to not be able to do something. ‘Sorry, you can’t. You’re on a hit TV show that changed your life! Do you mind?’ No, I don’t mind! This is great!” 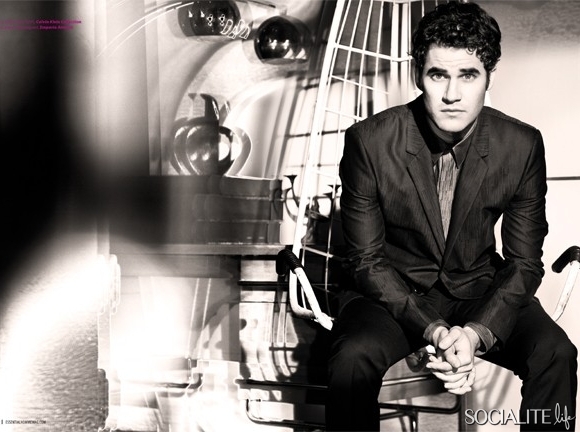 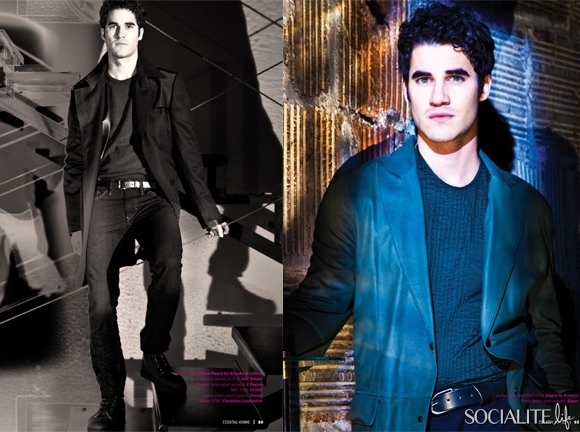 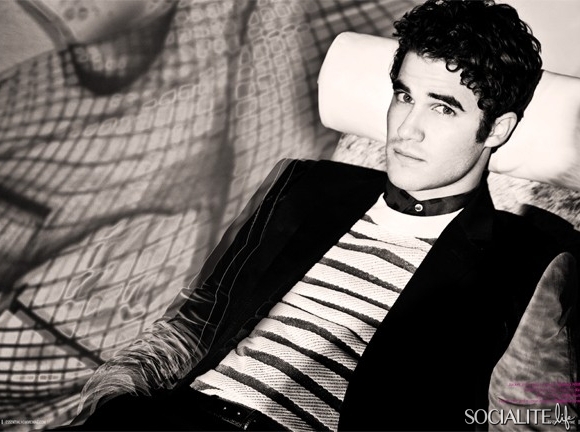 hris poses for Icon Magazine- the Bronzer action is interesting to say the least. 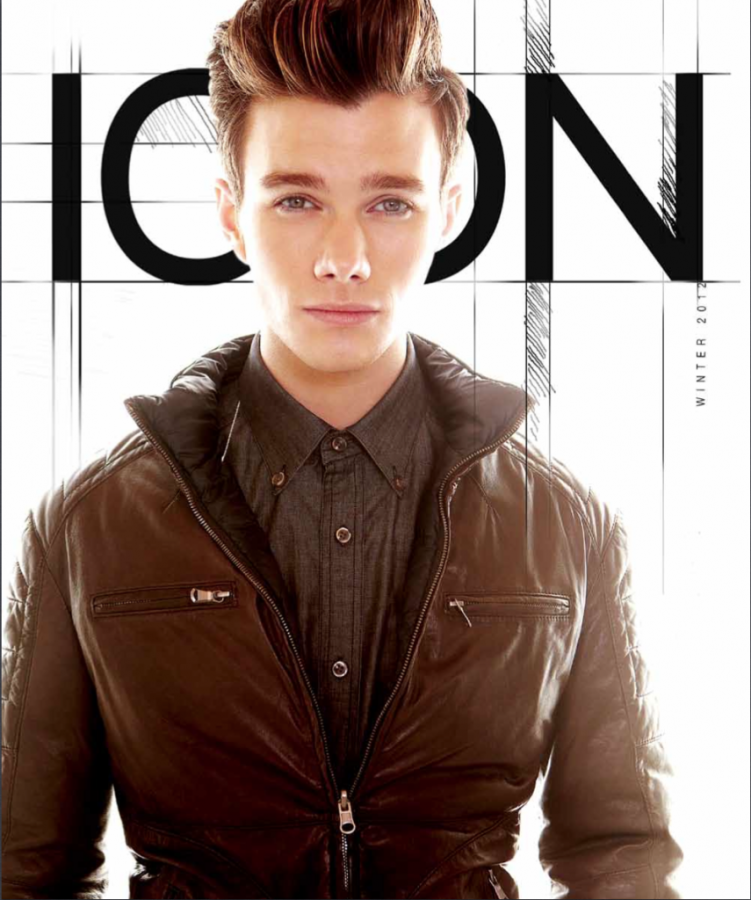 Hi Mods, Toothless's article is not out yet.