Megan Fox Isn't Crazy. So Why Do Guys Wish She Was? 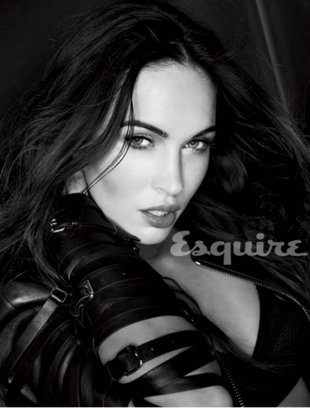 Megan Fox can teach us a lot about the core differences between men and women.

When a male sex symbol espouses his belief in aliens and religious extremism, he's permenantly deleted from People's Sexiest Man Alive files. When a female sex symbol does the same she's hailed by Esquire as the "last American bombshell. "

After Fox's interview for the men's magazine's February issue went viral this week, she was labeled by and large "crazy" due to a series of bizarre comments she makes about spirituality, mythical creatures and doomsday.

Score one for Megan. She's smarter than she seems. If your job is to play the world's hottest woman, being labeled "crazy" by your largely male fan-base means you're doing something right. Men love "crazy." More on that in a second.

After Esquire's reporter spends a good long paragraph describing her face as "sublime, a force of nature, an elaborately camouflaged butterfly...flawless," he concludes his profile with a list of some of the "craziest" things she said during their interview:

"I am childlike in my spirit, and I want to believe in fairy tales.. .

"Loch Ness monster - there's something to it....

"What distracts me from my reality is bigfoot. They are my celebrities."

This would be technically, DSM IV-checklist crazy, if a person in a newspaper turban was spewing these words sequentially to an audience of pigeons. But it's hardly shocking if it's accompanied by a spread of said "flawless" woman in little more than a sheer curtain.

Flawless attractiveness plus a sprinkle of "crazy" is a recipe for amazing imagination sex and don't think Esquire and Megan Fox are ignorant of this fact. At least that's the recipe for guys, more than girls. (No woman was fantasizing about Tom or Mel when they were granted the same description.)

Then again, Fox's crazy doesn't really seem so couch-jumpy. As the ellipses in her list of "crazy" quotes suggest, her statements are out of context, and provided during an interview that--if compelling--will land the magazine's cover.

So Fox believes in aliens, so does NASA. And bigfoot? She probably watches a lot of the Discovery Channel. And yes, she wants to believe in fairy tales. Have you met a bride, lately? None of these statements, not even her admission to speaking in tongues (yes she admits to doing that too) is so outlandish considering she was raised attending a pentacostal church where those rituals were performed.

But let's not spoil the fantasy of the "crazy girl."

The "crazy" girl is someone who's impulsive in that she likes road trips and impromptu tequila shots. She's slightly dangerous but not, like, dangerous-dangerous. She's eccentric to the extent that her bra straps sometimes show, and she liked The Hobbit. She's carefree in that she'll get a sexy tattoo and a marriage license on a whim in Vegas, and she's religious in that gothic ironic home-decorating way. She's mystical but not flakey, mythical not astrological, and into vampires not serial killers. Most importantly she isn't afraid to get into a physical fight with an equally crazy sexy woman who steps to her.

In short: someone who's "freaky" in bed. Not in person.

This is particularly defining for a starlet like Fox, whose "flawless" symmetry may come off as cool, unattainable, or even "frigid" to male fans in search of a fantasy girl. The idea that she's flawed, if mentally, suggests she's more relatable than she looks.

According to Esquire, Fox collects Lord of the Rings and Star Wars memorabilia (a girl geek!) she's passionate about Mayan spirituality (deep, disturbed), she wants to travel the earth as an archeologist (road trip!) and has no problem taking down truly troubled fellow starlet Lindsay Lohan, calling her "unreliable and uninsurable" in the interview. (Catfight!)

Oh yeah, Fox is every pubescent boy's poster-girl fantasy, and every man's fantasy when the pubescent nesting doll inside him pops open.

But the truth is, Megan Fox doesn't seem that crazy. Since the Esquire article came out, she claimed she was misquoted about Lohan, and called the actress "gifted" in a very succinct and peace-making statement on her Facebook page. Also on Fox's Facebook page: the totally unremarkable social networking updates of a normal starlet. She gives make-up pointers for fans, promotes global charities with the clumsiness of a woman who lives in a movie trailer, and pokes fun of her totally flawless high school photos. Self-absorbed? Sure. A little too serious? Definitely. But crazy? Not unless you want her to be.

Fox, for all her snake-charming-Mayan-doomsday-bigfoot banter, is just following a formula carved out by crazy bombshells of ages past. Remember how crazy mid-90s Madonna was, with her bras and her crosses and her sex book? And what about crazy Y2K Angelina Jolie circa Billy Bob Thornton and blood vile necklaces and brother-kissing? If those former unhinged sex symbols taught us anything, it's that "crazy" leads not to temptation later in life but to kids. Lots of 'em. Sorry dudes.