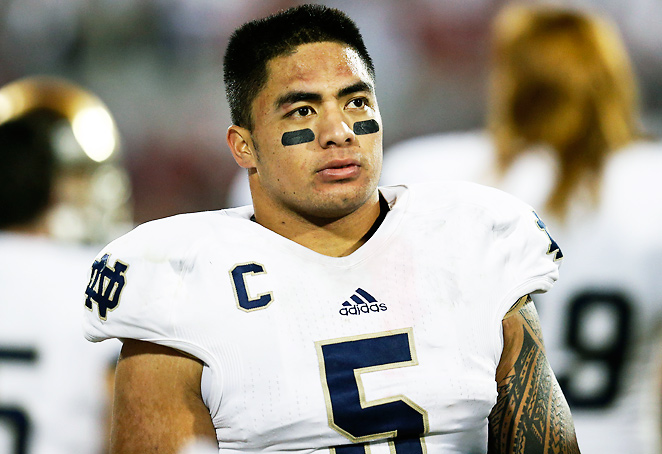 Most details trickling out about the Manti Te'o story just leads to more questions.

Sports Illustrated isn't the only publication that wrote about Te'o and his girlfriend, who was presumed to be dead but as Deadspin told us, was fake. SI was the one that got the most criticism on social media in the 24 hours since the Deadspin story was published, however.

So SI's Pete Thamel, who wrote the story on Te'o that appeared in the Oct. 1 interview, shared an extensive transcript from his two-hour interview with Te'o, and with others it talked to for the story. It is very interesting but doesn't bring us to the ultimate truth of what Te'o may have known, when he knew it, if he had any involvement with the hoax or as Notre Dame athletic director Jack Swarbrick said yesterday, if he's the innocent victim of an elaborate scam.

The interview has so many details that either this was an incredibly elaborate hoax on Te'o that left no stone unturned, or Te'o was amazing at telling a fairy tale down to the last trivial fact.

He tells Thamel about his "girlfriend" Lennay Kekua's name ("Her real name is actually Melelengei, but her friends couldn't say that so they just called her Lennay," Te'o said), her travels ("She taught at elementary schools. She flew to New Zealand to just work with kids. That's what she loved to do, work with children."), her car accident ("Remember she got in the accident and she was in a coma. We lost her, actually, twice. She flatlined twice. They revived her twice.") and her battle with leukemia ("They said that they took her in and ran some blood tests and that's when they found leukemia. From that hospital she was treated for cancer and then she went to St. Jude's. She was in St. Jude's and then she went to another hospital").

He also talked about her not being able to communicate after her accident, and her phone conversations with her:

"She could only breathe. One of the miraculous things was when I talked to her and she would hear my voice her breathing would pick up. Like quickly, and then she would start crying. But her breathing would quicken, and she would start crying. So her brother was in the room with the nurse. They were monitoring her. She said, "Who is she on the phone with?" Her boyfriend. She was like, "That's amazing. She doesn't do that with anybody else."

What's not in the story is any specific confirmation that they'd ever met in person. As Thamel wrote, "Why would you ask someone if he'd actually met his girlfriend who recently died?"

The wording is very specific from Te'o when he is asked if he met her in California.

One of the key passages is when Thamel tries to ask about when and how they met, especially with the way Te'o stumbles through the first answer.

SI: How did you meet her?

TE'O: We met just, ummmm, just she knew my cousin. And kind of saw me there so. Just kind of regular.

SI: How long were you dating? I know that can be a complicated question.

TE'O: Oct. 15 was the official date. Of last year. I've known her for four years. So we've been friends.

SI: So you dated for about a year.

It's an entertaining read, and the level of detail Te'o provides is pretty amazing in retrospect. Until we get a clear answer - one that may never come - we'll search through clues like these to try to figure out exactly what Te'o did or didn't do, and what he knew or didn't know about his girlfriend who never existed.

This whole thing is cray-cray. What do you believe, ONTD??