The fil Zero Dark Thirty s now showing in theaters nationwide and reactions are starting to appear on social networks. Here are some collected on the tumblr site dapsandhugs: 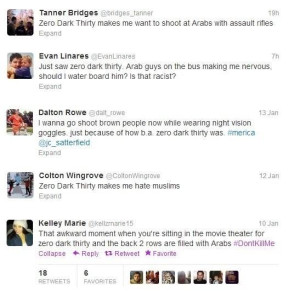 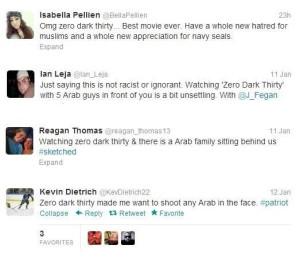 More disgusting tweets at Source 1, I don't have anything else to say.

forkmeup
January 17th, 2013, 11:57 pm
You don't think people's opinions on minorities are moulded by the media? Especially the news and movies? If not, you are extremely naive.

mrsdracula
January 18th, 2013, 01:00 am
yeah, let's pretend that in all these years we've actually seen ANY major characters in the Media that were Muslim and were portrayed positively without a connection to terrorism.

givemethepeasx
January 18th, 2013, 01:15 am
but the media are too blame. it's very rare to see arabs painted in a positive light in movies, music and video games. the media encourages these people.

pineandapple
January 17th, 2013, 11:12 pm
Coming from the same people who said "This is what you get for Pearl Harbor" to the Japanese victims of last year's earthquake.

ms_mmelissa
January 17th, 2013, 11:22 pm
Didn't people tweet that when the US women's soccer team won at the olympics? Some people are so dumb, I can't even.

mushroom18
January 18th, 2013, 05:06 am
Filipino here, but I get so irritated with the hard-on Americans have for Pearl Harbor. They keep harping on how big of a tragedy it was for America, when at the same period, Americans were killing thousands Filipino civilians. America likes to play the victim or Hero act, when they've done so many atrocities in other places.
(no subject) -

stop_drop_rolll
January 17th, 2013, 11:13 pm
Just saw the movie last night. I don't think any other movie has gotten me as tense or sitting on the edge of my seat as much as i was last night. it killed me.

guccipostagurl
January 17th, 2013, 11:22 pm
well obviously but i'm saying in this particular instance when it comes to american "patriotism" it generally means bashing muslims and arabs and i'm nhft.
(no subject) -

maebytonight
January 17th, 2013, 11:24 pm
Same. Sometimes I think people here take pleasure in being ignorant. I got into an argument on FB last night with a guy on my friend's status who claimed that racism is a myth. We need education reform tbh
(no subject) -

wtf is wrong with some people

violue
January 17th, 2013, 11:14 pm
I can't say I'm shocked that there are people that think this way, but I am continually stunned that there are this many people willing to openly admit it on social media sites.
(no subject) - (Anonymous)

Or people won't speak up when they say it so they think it's 100% acceptable to say anyone.

winniechili
January 17th, 2013, 11:16 pm
Can we please ban these stories where you just take a bunch of tweets from ignorant people?

sharpietoday
January 17th, 2013, 11:17 pm
Constant reminder how fucked up some people are.

cscgrl4life
January 17th, 2013, 11:18 pm
Semi-OT: For anyone who's seen the film how bad are the torture scenes? Are they standard shots of water boarding or ripping your finger nails off graphic?

eaglefan2011
January 17th, 2013, 11:21 pm
they show water boarding, humiliation (walking the suspect on a leash, stripping him naked) and they make him get in a really tiny box

weighty_ghost
January 17th, 2013, 11:23 pm
Not as graphic as I was expecting, from everyone's reactions. Like the above said, more humiliation than anything
(no subject) -

eaglefan2011 said. There is also a scene where Jessica Chastain's character prompts a man to hit a suspect over and over again to try and get information from him.

The most violent scene is probably the water boarding (there is a really disturbing shot of the guy, Amar, vomiting up mouthfuls of water after they finally release him). It's very painful to watch.
(no subject) -

xgirldc
January 17th, 2013, 11:44 pm
it wasn't fun to watch but i didn't think that was horrible. but that being said, parts of black swan STILL really upset me and i couldn't ever watch it again. for me personally it was nowhere as bad.

snitchster
January 17th, 2013, 11:58 pm
i found the scene in django where the slaves were fighting in front of the fire to be more disturbing than the torture scenes.
(no subject) -

ferelden
January 18th, 2013, 04:17 am
Less violent and more uncomfortable to watch. Nothing as graphic as nails being ripped out. More like major bruising from beatings.

umm no, especially when hollywood and western media has been portraying arabs and muslims as backwards, bloodthirsty, savages for over a hundred years

like how else are people's perceptions shaped?
(no subject) -

wombat_nectar
January 17th, 2013, 11:25 pm
seriously. i hate when people try to shut that part of the conversation down.

weighty_ghost
January 17th, 2013, 11:25 pm
I agree that it's not helping, but its like blaming movies and games for school shootings and violence. I'm sure it's some contributing factor but it's not the ONLY reason.
(no subject) -

belkisa
January 18th, 2013, 12:01 am
Exactly! Movies and games do influence people. Of course there are also other factors, but movies and games are to blame.

givemethepeasx
January 18th, 2013, 01:17 am
mte, people opinions are moulded by the media. if there was a positive arab presence in the media, less people would be as ignorant.

bell hook said something akin to this a few months back: "As much as media is created or influenced by culture, the media also has the power to create a culture as well."

I have been explaining this to people for months now (usually in explaining why the film "Red Dawn" was nasty business. My example is always "Fight Club." Originally a book, yes, but it wasn't until the movie came out that real fight clubs started popping up in lots of urban cities worldwide.