Michael J. Fox throws the shade of all shades at Taylor Swift 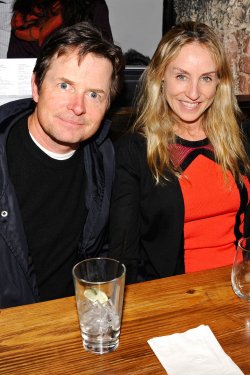 Remember at the Golden Globes, when Tina Fey told serial dater Taylor Swift to "stay away from Michael J. Fox's son," Sam? That was a pretty amazing moment. So you can imagine how thrilled we were to relive it with the elder Fox himself last night at a book party for Ann Leary's The Good House. Would Fox approve of a Sam/Taylor (Saylor) love connection? we asked. "No. No ... Just back off," he told us. "I don’t keep up with it all," he said. "But Taylor Swift writes songs about everybody she goes out with, right?" Right! "What a way to build a career." So if Swift showed up to a Fox family dinner (possibly wearing her fox sweater), how would he react? "I wouldn’t even know who she was," he said. But it'd probably dawn on him after the breakup song hit the radio. "Yeah, exactly," he said. "'Sam, You Piece of Shit.' Oh … that was the girl you brought home!"

andisprohi
January 17th, 2013, 08:27 pm
You know her next boyfriend will be like 60 years old and she'll say "He's so much more mature than guys my age. And he ASKS me to write songs about our relationship, so neener neener, haters"

shanny_w
January 17th, 2013, 08:42 pm
she needs someone bedridden so she can not accuse them of getting up and cheating on her

andisprohi
January 17th, 2013, 08:44 pm
Now I've got this godawful image of her dating someone like Dale The Whale from Monk. "Go ahead and look under the covers. You know you're dyyyyying tooooo. AL FRESCOOOOO! AHAHAHA!"

andisprohi
January 17th, 2013, 08:32 pm
She knitted one for everyone in MJF's family + included a pic of herself in front of the Back To The Future Ride, but they sent the box back to her