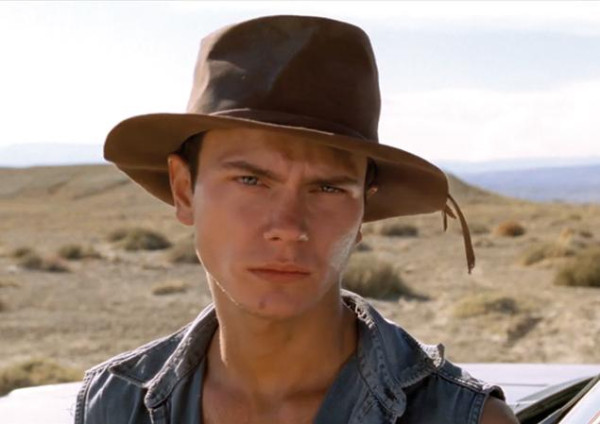 River Phoenix died before his final film, "Dark Blood," was ever released.

But it will soon officially see the light of day for the first time in North America, debuting at the Miami Film Festival in March.

Also starring Jonathan Pryce and Judy Davis, "Dark Blood" follows Boy (Phoenix), a young widower who retreats to the desert after his wife dies of radiation following nuclear tests near their home. He encounters a Hollywood couple who travel to the desert on a second honeymoon in an effort to save their marriage. After their car breaks down in the middle of nowhere, they seek refuge in Boy's shack, not realizing they will soon become his prisoners.

"Dark Blood," directed by George Sluizer, was 80 percent finished when Phoenix died on Oct. 31, 1993 at age 23 of a drug overdose. The footage, filmed in Utah, went into storage, and according to a press release, in 1999, the dutch filmmaker discovered that the insurance company wanted to destroy it. He decided to save the material by getting the unedited footage out of storage and shipped to the Netherlands. In 2008, Sluizer, facing his own illness at the time, chose to finish it.

"It was a kind of urgency," he said in a statement. "The director Michelangelo Antonioni once said, 'If I can't film I prefer to die.' I can find myself in these words. You are a craftsman and you want to complete your work. I am a perfectionist. I wanted to finish 'Dark Blood' and I also wanted to preserve the cast and crew's creative work."

"Dark Blood is a film of legend, one of Hollywood's great mysteries," Miami Film Festival executive director Jaie Laplante said in a statement. "The tragic loss of River Phoenix's outstanding talent is still profoundly felt 20 years later. We are proud that George Sluizer has honored Miami as the place to finally share his remarkable collaboration with Phoenix and the other great artists involved with 'Dark Blood.'"

"Dark Blood" had its European premiere last fall at the Dutch Film Festival.

According to The Hollywood Reporter, Phoenix's family doesn't want to be involved in the release of the film, saying, "Despite George Sluizer's claim that he has been communicating with River Phoenix's family in regard to releasing River's last film, Joaquin Phoenix and his family have not been in communication with the director nor will they participate in any way."