Columbia decides not to waste its time on basic... 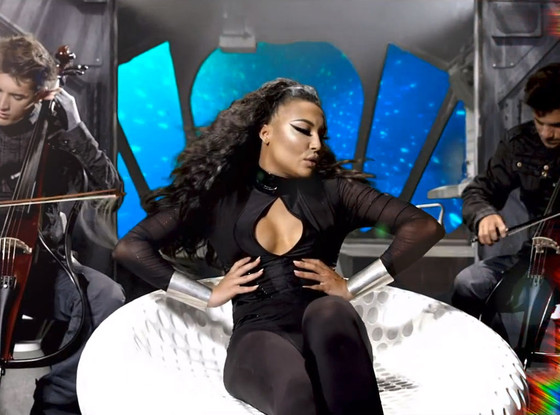 Brittana. It’s fun to say, don’tcha think? What’s even more fun is watching this former gem of a couple share scenes together. Between Brittany’s (Heather Morris) hilariously random one-liners and Santana’s (Naya Rivera) sharp tongue and quick-witted insults, they were the epitome of a spicy and sweet duo.

Whil Glee ans are still outraged that the show’s three power couples were ripped apart early in the fourth season, the Brittana fans seemed to spark one of the biggest uproars, even getting a winking shout-out on the show when Brittany mentioned the “lesbian blogger community.&rdquo Wanky! Whether you thought the reference was positive or negative, one thing is for sure: This lady-loving fandom has definitely made a strong impression on the powers that be a Glee.

Last week, I caught up with the beyond gorgeou Naya Rivera t FOX’s all-star party and made sure to ask how she feels about the Brittana fans’ continued support of the couple. Rivera smiled and said, “It feels amazing. I feel like ten, twenty years from now we’ll be looking back at the iconic couples in television and this amazing teenage lesbian couple is going to be one of them, and I feel like that’s sort of history making.”

The actress revealed in last week’s edition o Leanne’s Spoiler List hat Santana absolutely “hates” the idea of Brittany in a new relationship. (For the record, we do too!) So is there any hope for Brittany and Santana to revive their romance? Rivera answered without any hesitation, “Yes! I feel like there’s always hope for them! It’s not like they hate each other, which is the beautiful thing about it. They’re still friends as we’ve seen in all the episodes when she came back.” The lovely Latina also made sure to point out one very important detail: “And Santana said that she did not call it an official break-up.” Squee!

If you’ve been wondering when Rivera is going to unleash her killer voice on a solo album, it looks like the wait might be a little longer than we’d like. “I don’t know, we’ve hit a bit of a bump in the road, that’s how I’ll put it,” Rivera revealed. “We’re sort of at a crossroads; I might switch labels. I don’t really know what Colombia is up to.” Hopefully they figure out this out soon because a person can only play “Valerie” on repeat for so long before they start craving something more.

Luckily, fans were rewarded with a special musical treat when Rivera recently teamed up with 2CELLOS to record and perform a ultra-sultry version of Muse’s “Supermassive Black Hole.” The 26-year-old says, “That was so much fun! That was something that I don’t get to do a lot of outside o Glee. It was cool because it was very low pressure. It wasn’t my song or my album, and the guys are amazing.” Rivera adds with a laugh, “And I got to wear a cool cat suit!”

Naya needs to go independent because she is too basic for any real record label to focus on. Lea Michele meanwhile continues to record her album even though she signed with Columbia less than 6 months ago. Let's be real though besides future Grammy Winner Amber Riley- all the others that have solo deals with Columbia(Darren, Kevin and Lea) are most likely going to flop.

What do you think ONTD? Who in the Glee cast has the potential for a real music career?
Tags: glee (fox), naya rivera
Subscribe