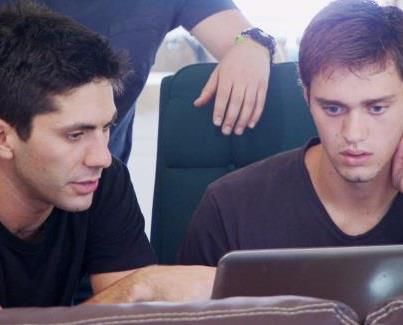 (Video won't embed. Click on the source link to watch.)

Tyler had been talking to a college student named Amanda online for about a year, though they'd never even spoken on the phone. She claimed she didn't own one, which "Catfish: The TV Show" cameraman Max Joseph says is one of those big red flags people shouldn't ignore. Others include people claiming to be models, or refusing to video chat.

But Tyler did ignore them, and their Facebook chatting started to become more explicit. When the show facilitated their first meeting, he was certainly shocked to see that Amanda wasn't the pretty girl he thought she was, based on pictures she'd sent him.

She was a young man named Aaron.

"I don’t even want to be gay to be honest," Aaron said. "But that’s something you can’t change and I accepted that a while ago." When Joseph asked him if he'd "rather be a straight girl than a gay guy," Aaron said yes.

He'd gotten so deep into his onlline deception that he'd gotten kicked out of college once for chatting with his RA as Amanda. He created the profile back when he was a sophomore in high school, and at one time he chatted with up to 100 different men.

Even though Tyler forgave Aaron for his deception, saying he understood that Aaron had a difficult life, Aaron still vowed to stop playing these online games with people's emotions. He had to admit that he was hurting people.