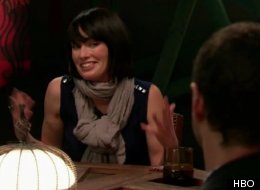 It's more or less a rule of thumb in Westeros: The more closely related one character is to another, the more likely they are to dislike each other.

Of course, almost everyone fights with their nearest and dearest on "Game of Thrones," and in a kingdom where blood is spilled freely, the good news is that it's not common for siblings to kill each other. But that doesn't mean they have to like each other.

For the "Game of Thrones" Season 2 DVD set, actors Emilia Clarke, Kit Harington, Lena Headey, Michelle Fairley and Liam Cunningham, as well as executive producers David Benioff and D.B. Weiss, gathered to talk about the show in depth. In this exclusive clip from their roundtable discussion (above), Headey talked about the rivalry between her character, Cersei Lannister, and her brother, Tyrion (Emmy winner Peter Dinklage) and reveals a violent moment that wasn't in the script.

The roundtable is just one of the features on the DVD set, which comes out Feb. 19. In addition to all 10 episodes from the show's second season, there's a documentary on the making of the famous "Blackwater" episode, a discussion of the religions seen on the show among Weiss, Benioff and George R.R. Martin (who wrote the novels on which "Game of Thrones" is based), character profiles and a dozen audio commentaries.