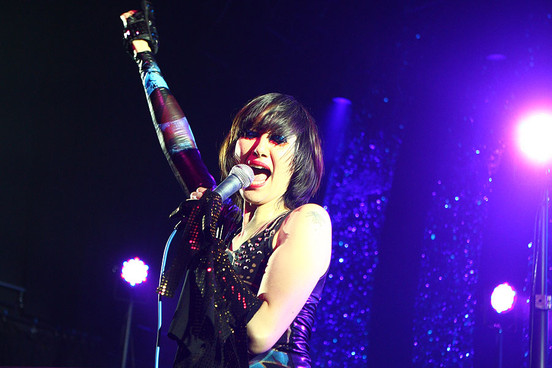 Yeah Yeah Yeahs debuted a clutch of new songs last night (January 11) at a show at the Glass House in Pomona, California.
Arriving onstage in a glittery headband and zebra print cape over a red fringed jacket, frontwoman Karen O opened up the set with a brand new track which included the lyrics "it's good to sing/it's good to cry".
The band followed it with 'Phenomena' and then another new song, while the 14-track set also included one more slower-paced new number. All of the new songs are thought to be taken from the band's upcoming fourth LP, which is slated for release this spring and follows their 2009 album 'It's Blitz!'.

The band's set for the one-off gig also included 'Heads Will Roll', 'Soft Shock', 'Gold Lion' and 'Zero'. Karen O - sporting a blonde bobbed hairstyle - kicked glitter bombs of Y-shaped confetti into the rowdy crowd throughout the performance, and handed her microphone to fans in the front rows so they could sing-along to 'Cheated Hearts'.
"Thank you Pomona, we're the Yeah Yeah Yeahs. You know that. We love you," said Karen O before leaving the stage. Yeah Yeah Yeahs then returned to play a two song encore, made up of 'Maps' and 'Tick', with Karen O dedicating the former to the evening's support band, Los Angeles punk duo The Bots. "This is a Yeah Yeah Yeahs love song," she said before the track. "We'd like to dedicate this song to The Bots, who opened up and are cool as shit! Yeah Yeah Yeahs love The Bots!"