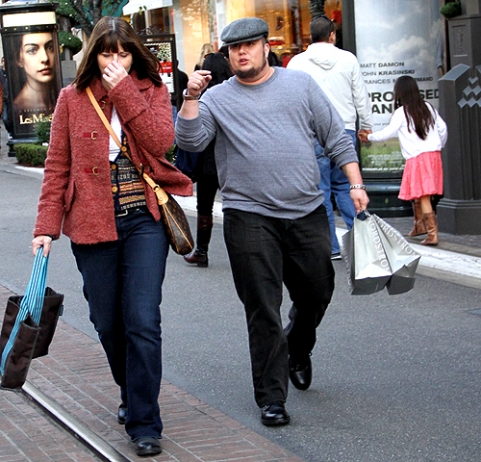 The 43-year-old activist has recently shed 25 pounds, sources say, but he wants to lose much more – and find true love!

“Chaz has tried everything to slim down in the past, but now he’s finally seeing results and he couldn’t be happier,” a source told The ENQUIRER.

“He’s telling everyone that this time will be different because he’s committed to listening to his doctors. But the real key to his weight loss may be his motivation – he wants to find a life partner.”

Chaz – whose parents are show­biz diva Cher, 66, and the late Sonny Bono – has struggled with his weight for years.

He lost 24 pound, but quickly regained it all, plus more.

In 2009, he announced he was transitioning from female to male and began hor­mone injections that contributed to his weight woes.

On the Nov. 14 episode of the syndicated daytime talk show “The Doctors,” Chaz was said to weigh 250 pounds. But sources told The ENQUIRER that Chaz  asked the show to fudge on his weight because he was actually much heavier. In September we reported that Chaz had ballooned to 345 pounds.

In any case, the brave “Dancing with the Stars” alumnus announced that he wanted to be held accountable for his weight and sought the help of Dr. Travis Stork and Dr. Lisa Masterson.

“I’m just eating too much,” he con­fessed. “My portion control is just not where it should be. This is really hard for me, and this is an issue that I don’t talk about with people because it’s so personal. I also kind of hope that the pressure of doing something publicly will give me a little bit more incentive.”

CHAZ looks great and has clearly dropped significant weight and showed off his slimmer frame while shopping with a mystery woman at The Grove in L.A. in December. The source says he’s determined to lose even more of his bulk in 2013.

Meanwhile, Chaz has been starved for love since splitting with longtime girl­friend Jennifer Elia in December 2011 – and he’s now ready for romance, said the source.

“Chaz believed Jennifer was the love of his life, but he now realizes that he was going through too much personal turmoil to let anyone get close,” explained the source.

“He says he finally has a clear plan for the future. He’s looking to lose a total of 50 to 80 pounds and then start dating.

“Chaz knows that somewhere there’s a Ms. Right for him, but he wants t to be at his ideal weight when they meet.”