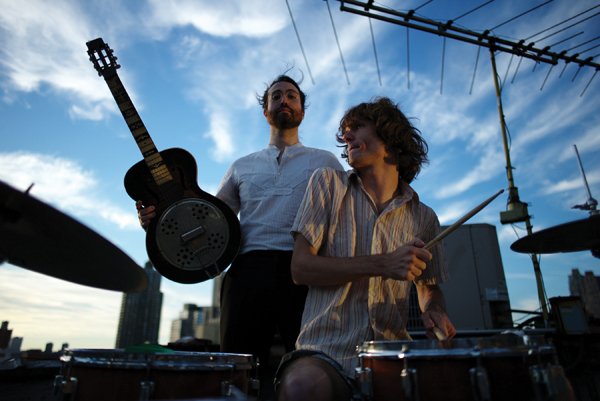 Mystical Weapons is a brash new experimental-psych project from Sean Lennon (The Ghost Of A Saber Tooth Tiger) and Deerhoof drummer Greg Saunier. The two formed after meeting at a Plastic Ono Band show, added filmmaker and artist Martha Colburn on visuals -- and the rest, as they say, is improv history.

"Instantly, we had this rapport!" Saunier recently toldInterview magazine.

That rapport led to the duo's freeform, self-titled debut (out Jan. 15) on Lennon’s own Chimera Music label.

An improvised album does require good chemistry between the musicians, and, perhaps most importantly, between the band and the listener. This album has both. From the delicately wrought "Silk Screen Eyes," and playfulness of "Mechanical Mammoth," to the blistering guitar work and shredding drums of "Colony Collapse Disorder" Mystical Weapons bubbles over with a kind of frenetic energy. But throughout, Lennon and Saunier clearly have this mystical jam very much under control.

You can preview the whole sonic experiment a few days early and watch a video from Martha Colburn for the song "Colony Collapse Disorder."